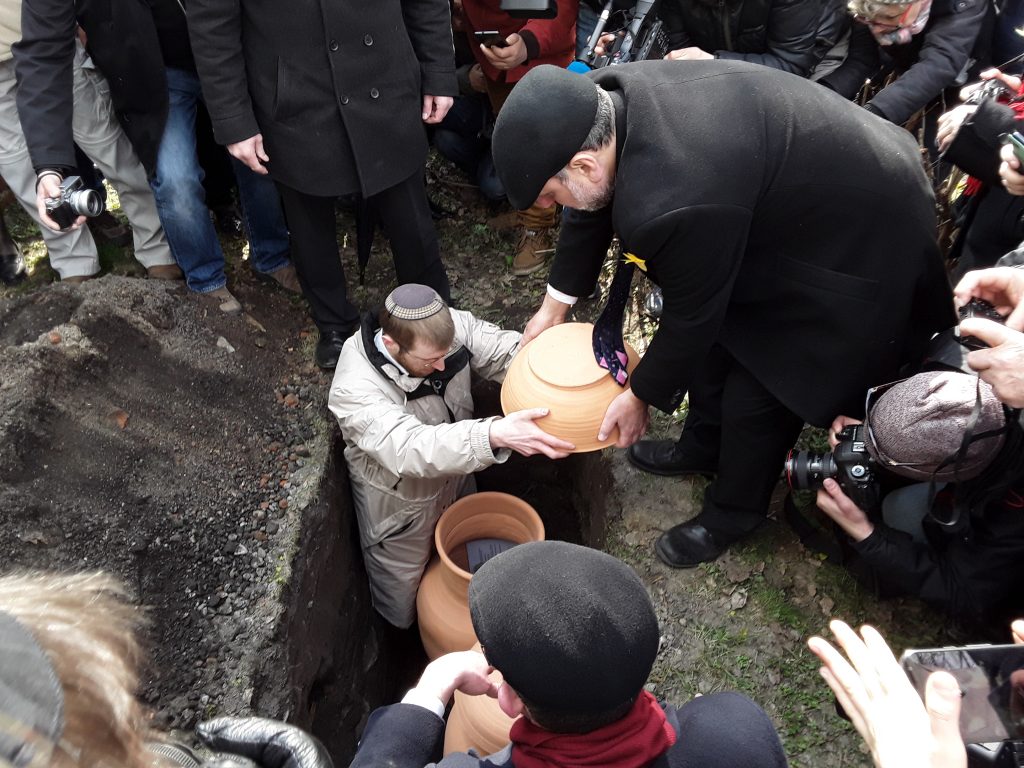 In 1936 in Poland, a levayah was held for remains of sifrei Torah. That was the last time such a thing was done in that country until April 19, 2017, the 74th anniversary of the Warsaw Uprising.

The day after Pesach, in a unique and deeply moving ceremony, the torn parts of sifrei Torah that were recently unearthed during construction on Jana Pawla Avenue, at the site of the Warsaw Ghetto, were placed in clay pots and buried near the human remains that were found underground at the same location and interred in 2004.

The burial was organized by Rabbi Moshe Bloom, Rosh Kollel Nozyk and a Rav of the Jewish community of Warsaw, together with Rabbi Michael Schudrich, Chief Rabbi of both Poland and Warsaw.

Rabbi Bloom met with Rabbi Schudrich about three years ago to discuss what to do with the scrolls. “That was the beginning of a long journey, with many people helping along the way,” said Rabbi Bloom. Rabbi Bloom publicly thanked Shmuel Ben Eliezer of New York, who examined the scrolls, and also expressed gratitude to The Foundation for the Preservation of Jewish Heritage in Poland, known as FODZ, its CEO Monika Krawczyk, and Marcin Bartosiewicz, who helped in ordering the beautiful clay vessels and other technicalities.

There were over 100 people in attendance at the burial ceremony, plus 30 reporters from the Polish media, members of the Polish Sejm (Parliament), and representatives from the German and Austrian embassies in Poland. Rabbi Yehoshua Ellis of Katowice was there, as was Rabbi Motti Pawlak, principal of the Lauder School of Warsaw, and the Chabad shliach to Warsaw, Rabbi Sholom Ber Stambler.

Rabbi Schudrich told Hamodia, “We did it the way the Gemara says, in large pottery, and it took a long time to find a company willing to make it and willing to take an order for two and not two hundred. We also needed to find someone to study the sifrei Torah, to find any unusual tagim or otiot and to document and photograph them.

“We had to figure out where to bury them. We found a most appropriate place; we buried them near the bones of Kedoshim found recently while renovations were being done in Warsaw. No question the bones had to be Jewish; why else would there be the 70-year-old remains of so many people under a building in the area that used to be the Warsaw ghetto? This made sense because the way the Germans responded to the Warsaw Uprising was by blowing up the buildings, and Jews were in those buildings.

“We did the right thing. This is what we do with destroyed sifrei Torah. On the one hand we bury them as we bury fellow Jews, but the words of the Torah live forever. Rabbi Bloom is teaching Torah every day so it was appropriate that he was the initiator of this burial of the physical Torah.

“Living here in Poland is an opportunity to work in kiruv with people who were cut off from Yiddishkeit, from the Jewish people. This is a chance to do that. I couldn’t do that in the same way anywhere else.”

Addressing the crowd at the event, Rabbi Bloom said:

“Jeremiah the Prophet lived at the end of the First Temple. When the Babylonians were besieging Yerushalayim, G-d told Jeremiah to tell the people that Jerusalem and the holy Temple would be destroyed.

“But then, in Chapter 32, G-d tells Jeremiah to buy a piece of land, to write the act of purchase in the book, and to store this book in clay vessels so it will keep for a long time.

“Jeremiah asks G-d, why do it if Jerusalem is going to be destroyed soon? G-d answers that even though the city will be destroyed, in the future G-d will bring the Jews back, and fields will be again bought and documents will be written in Israel.

“Our sages learn from this story that a sefer Torah which is not usable anymore should be buried in clay vessels.

“To symbolize the eternity of the Torah, we place it in a clay vessel first. I am a Rabbi, and I serve also as a Rosh Kollel. We learn Torah every day in the Nozyk Synagogue, headquarters of the Warsaw Jewish community. It is symbolic that I was honored to help arrange this, because while we are burying Torah scrolls, we study the Torah…

“The physical Torah scrolls are now being buried, but the words that were written in them are learned and lived every day.

“Here, in Warsaw, today, the Torah is living and increasing — because Torah is eternal, and Torah is crucial to the survival and identity of the Jewish nation.

“These scrolls were burned and destroyed, but the Jewish spirit wasn’t eliminated. In defiling these sifrei Torah, people had the intention to stop the Torah learning of the Jewish nation. But we who stand here today say no. We say, Torah and the Jewish nation are stronger than all our enemies.”

As the precious, torn sifrei Torah were lowered into the ground that also holds the remains of Kedoshim, Rabbi Bloom concluded with a resounding, “Am Yisrael Chai!”