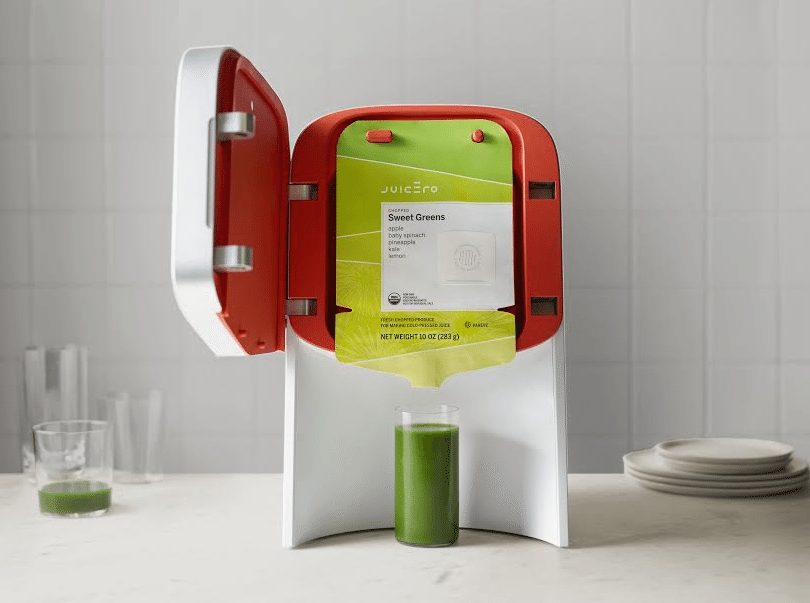 One of the most lavishly funded gadget startups in Silicon Valley last year was Juicero Inc. It makes a juice machine. The product was an unlikely pick for top technology investors, but they were drawn to the idea of an internet-connected device that transforms single-serving packets of chopped fruits and vegetables into a refreshing and healthy beverage.

Doug Evans, the company’s founder, would compare himself with Steve Jobs in his pursuit of juicing perfection. He declared that his juice press wields four tons of force-“enough to lift two Teslas,” he said. Google’s venture capital arm and other backers poured about $120 million into the startup.

Juicero sells the machine for $400, plus the cost of individual juice packs delivered weekly. Tech blogs have dubbed it a “Keurig for juice.”

But after the product hit the market, some investors were surprised to discover a much cheaper alternative: You can squeeze the Juicero bags with your bare hands. Two backers said the final device was bulkier than what was originally pitched and that they were puzzled to find that customers could achieve similar results without it. Bloomberg performed its own press test, pitting a Juicero machine against a reporter’s grip. The experiment found that squeezing the bag yields nearly the same amount of juice just as quickly-and in some cases, faster-than using the device.

Juicero declined to comment. A person close to the company said Juicero is aware the packs can be squeezed by hand but that most people would prefer to use the machine because the process is more consistent and less messy. The device also reads a QR code printed on the back of each produce pack and checks the source against an online database to ensure the contents haven’t expired or been recalled, the person said. The expiration date is also printed on the pack.

The creator of Juicero is something of a luminary in the world of juicing. In 2002, Evans helped start Organic Avenue, a chain of juice bars selling cold-press concoctions in glass jars. The New York franchise drew rave reviews. After working on the business for a decade, Evans sold controlling interest to an investor, who pushed him out. The company lumbered toward bankruptcy as Evans got to work on his next project.

Evans, 50, follows a diet of mostly raw, vegan foods. Technology was a new thing for him, but he picked it up quickly. He said he spent about three years building a dozen prototypes before devising Juicero’s patent-pending press. In an interview with technology website Recode, he likened his work to the invention of a mainstream personal computer by Apple’s Jobs. “There are 400 custom parts in here,” Evans told Recode. “There’s a scanner; there’s a microprocessor; there’s a wireless chip, wireless antenna.”

In fundraising meetings, Evans promised a revolutionary machine capable of squeezing large chunks of fruits and vegetables, said two people who agreed to invest in the company. Evans secured funding in 2014 by showing 3D-printed renderings of the product without a working prototype, said the people, who asked not to be identified because they signed nondisclosure agreements.

Kleiner Perkins Caufield & Byers joined Alphabet Inc. and others in funding Juicero. Evans’s subscription model had hit on a sweet spot for venture capitalists, said Brian Frank, who invests in food-tech companies through his FTW Ventures fund. The successes of Nespresso and Dollar Shave Club have made VCs eager to chase such deals, he said. “Investors are very intrigued by businesses that combine the one-time sale of hardware that ends up leading to repeat purchases of consumable packages,” said Frank, who doesn’t own Juicero shares.

But after the product’s introduction last year, at least two Juicero investors were taken aback after finding the packs could be squeezed by hand. They also said the machine was much bigger than what Evans had proposed. One of the investors said they were frustrated with how the company didn’t deliver on the original pitch and that their venture firm wouldn’t have met with Evans if he were hawking bags of juice that didn’t require high-priced hardware. Juicero didn’t broadly disclose to investors or employees that packs can be hand squeezed, said four people with knowledge of the matter.

Doug Chertok, a Juicero investor, said he figured it out on his own. “There is no doubt the packs can be squeezed without the machine,” he said. “I’m still a huge fan.” Chertok, whose Vast Ventures is also a backer of popular organic restaurant chain Sweetgreen, said Juicero’s approach to delivering cheap organic produce could be valuable. He said the company is a “platform” for a new model of food delivery, where fresh fruits and veggies are delivered regularly to the home. “Juicero is still figuring out its sweet spot,” he said. “I have no doubt that they’ll be very successful.”

Built on the promise of technology, Juicero was among the top-funded U.S. hardware startups in 2016. But in October, Evans was replaced as chief executive officer by Jeff Dunn, a former president at Coca-Cola Co. A few months later, Juicero dropped the price of the machine to $400 from $700. “It’s very difficult to differentiate yourself in the food and beverage sector,” said Kurt Jetta, who runs retail and consumer data firm Tabs Analytics. “Entrepreneurs may be tempted to have a technology angle when it’s not really there.”

Evans is now chairman of the startup’s board. The company sells produce packs for $5 to $8 but limits sales to owners of Juicero hardware. The products were only available in three states until Tuesday, when the company expanded to 17. Packs can’t be shipped long distances because the contents are perishable.

Juicero has managed to find a niche at high-end hotels and restaurants. Workers from seven businesses that own Juicero machines said they like the product because the disposable packs can be discarded with minimal cleanup. All seven said they didn’t know Juicero packs could be squeezed by hand. In Bloomberg’s squeeze tests, hands did the job quicker, but the device was slightly more thorough. Reporters were able to wring 7.5 ounces of juice in a minute and a half. The machine yielded 8 ounces in about two minutes.

Kippy Williams, owner of Kippy’s Organic Non-Dairy Ice Cream Shop in Los Angeles and Toyko, said she purchased her Juicero late last year for $1,200. (Juicero charges businesses a premium, she said.) Williams, a self-proclaimed health-food evangelist, said she’d like to see the company sell packs by themselves to people who can’t afford the device. “It would be great if they offered people the opportunity to buy the packs and press them by hand,” she said. “I want juice for every man, woman and child.”