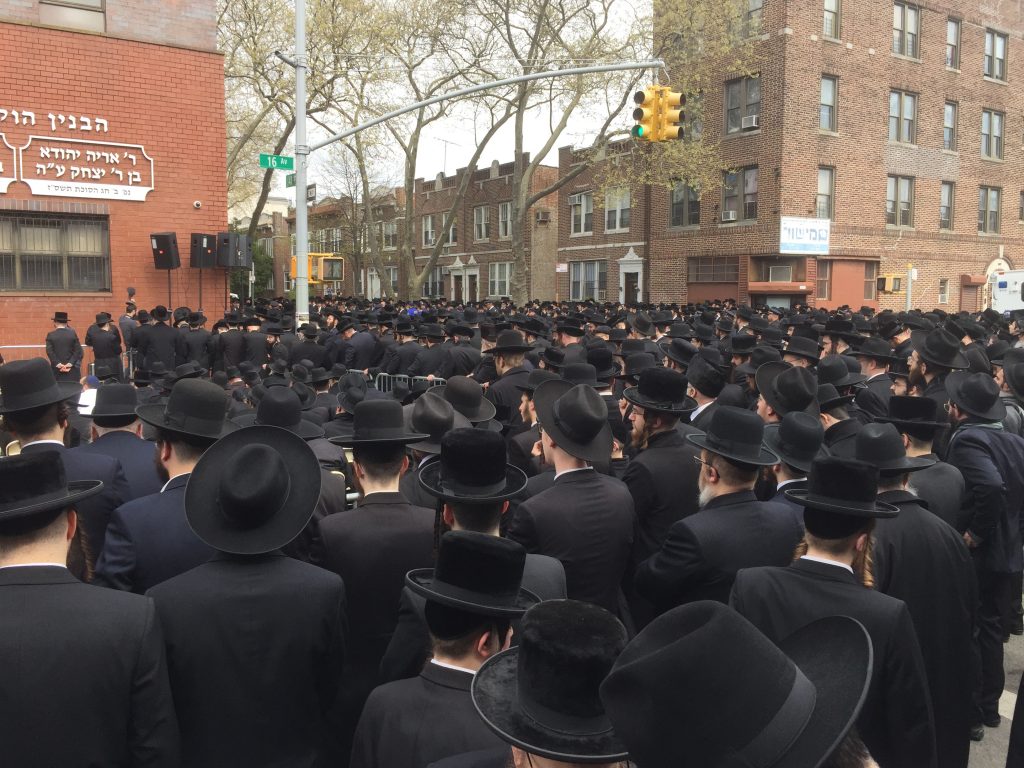 The masses in attendance quickly filled the yeshivah’s beis medrash on 16th Avenue and 41st Street, with many more listening to hespeidim broadcast on speakers outside, on what was a particularly cool spring morning.

For decades, Rav Rosenblum led not only his yeshivah, but was a manhig of the klal, particularly in the Boro Park community. Because the Rosh Yeshivah despised that people should speak about him, and because it was Isru Chag, hespeidim were kept to a minimum.

The levayah was first addressed by the Kossover Rebbe, shlita, who read Rav Rosenblum’s brief tzavaah, naming Harav Chaim Rosenberg as his successor as Rosh Yeshivah and his son Harav Eliyohu Rosenblum as the Nasi of Shaarei Yosher.

Harav Malkiel Kotler, shlita, Rosh Yeshivas Beth Medrash Govoha of Lakewood, spoke about the niftar’s deep connection to his own grandfather, Harav Aharon, zt”l, and his dedication to continuing his derech of dedication to Torah lishmah and building talmidim who would learn Torah in purity without any distractions, compromises or outside influences.

Others discussed Rav Rosenblum’s boundless dedication and love for his fellow Jew.

“It was always a wonder to me how a Yid, a gaon with his mind constantly immersed in learning, a Yid with a burning ahavas haTorah and with so many of the tzaros of Klal Yisrael on his head —with the whole pekel — he always greeted everyone with such a hadras panim,” said Harav Ephraim Wachsman, Rosh Yeshivas Meor Yitzchok.

Harav Moshe Davis, Rosh Yeshivas Zichron Mayer of Mountaindale, mentioned that even in his younger years, and despite his valiant attempts to flee from kavod, Rav Rosenblum’s greatness could not help but be recognized.

Harav Yitzchok Goldberg, a son-in-law of the RoshYeshivah, spoke about his father-in-law’s tremendous gift for giving advice.

“I have heard so many stories from talmidim about his eitzos, but in the family we asked him about everything. We always said, ‘Go ask Tatte, go ask Zeidie,’ and his answers were always clear, and in the end we always saw that he was right,” he said. “Above all, what he demanded from us in the family was to maintain the standards of tznius.”

“He enjoyed just saying over a kushya or a terutz in learning, even if it was a simple one; he had a love for the Torah itself. He was able to listen for hours to the tzaros of other Yidden and we saw how it affected him, but in between each one he spoke to, he went back to his Gemara,” he said. “He put everything he had into the battles [over technology issues], so much that it took away from his health.”

Harav Eliyohu Rosenblum, the niftar’s oldest son, spoke emotionally, saying that his father’s own tremendous humility prevented him from receiving the kavod he deserved.

“We have to ask mechilah. For many years I never understood what the Tatte was … because he conducted himself with such a pashtus in the house and did everything he could to hide who he was,” he said. “Tatte, you always said that you would be a meilitz yosher for us and that you would help us. Go up to the kisei hakavod and ask for all of us.”

The levayah continued to Monsey for additional hespeidim and kevurah in the Vizhnitz beis hachaim.