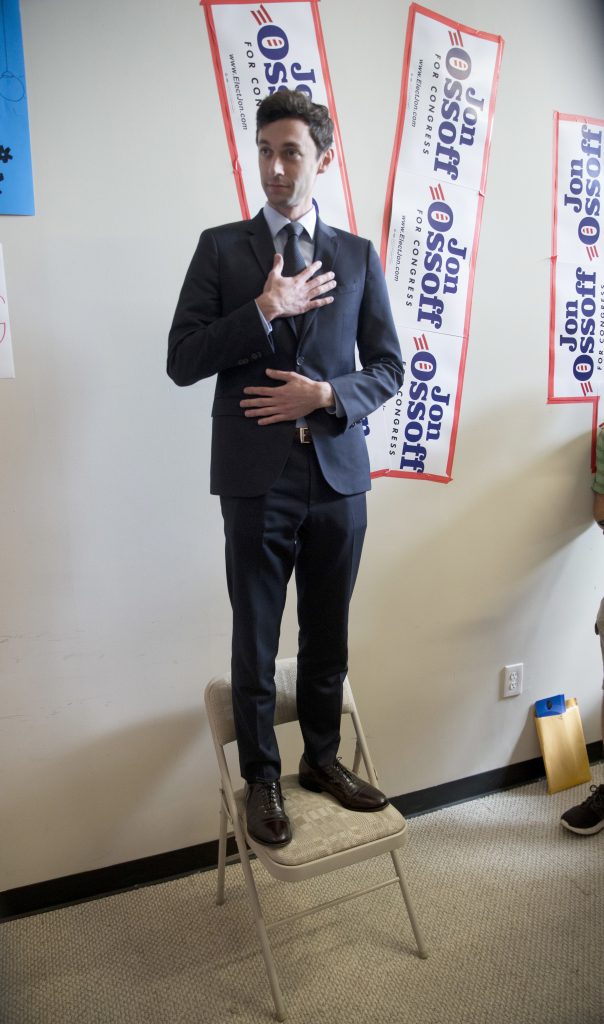 A Georgia congressional election is headed to a runoff that will ratchet up the already significant national attention — and campaign cash — on a race that poses an early measure for President Donald Trump and both major parties ahead of the 2018 midterm elections.

Democrat Jon Ossoff, a 30-year-old former congressional staffer, and Republican Karen Handel, a former Georgia secretary of state, will meet in the June 20 runoff. But as they campaign across the northern suburbs of Atlanta, they will act largely as proxies for the roiled political atmosphere in Washington and across the country.

Ossoff led an 18-candidate field of Republicans, Democrats and independents, the entire slate placed on a single ballot to choose a successor to Republican Tom Price, who resigned to join Trump’s administration as health secretary. But Ossoff fell shy of the majority required to claim Georgia’s 6th Congressional District outright, opening the door to Handel, who finished a distant second but ahead of a gaggle of Republican contenders.

Republicans believe a two-candidate scenario will benefit them in a district that has been in Republican hands since 1978, when Atlanta suburbanites elected a young congressman named Newt Gingrich. But Ossoff’s campaign maintains momentum, fueled by more than $8 million in contributions from all over the nation, and liberal advocacy groups on Tuesday hailed his first-place finish as a success in its own right.

National leaders in both major parties agreed the Georgia race is a prime test run for the 2018 election cycle, because the affluent, well-educated district is replete with the kind of voters Democrats must win over to have any chance at reclaiming a House majority and winning more governor’s races.

At the least, the results suggest Republicans have no easy answer for how to handle President Trump in down-ballot races. He still engenders an intense loyalty among his core supporters but alienates many independents and even Republicans, leaving him unable to command a majority of the electorate. That was reflected in November, when President Trump barely won the Georgia 6th over Hillary Clinton, falling shy of a majority just four years after Republican Mitt Romney garnered more than 60 percent of the presidential vote.

Given those fundamentals, Ossoff has tried to capitalize on the anti-Trump energy while still appealing to independents and moderate Republicans in the conservative district.

He demonstrated the tightrope through the final hours of the primary campaign.

“This is not about me. … This is about the kind of community we want to live in. The kind of country we believe in,” Ossoff told supporters Monday night, forgoing any mention of the president despite Trump attacking him  as a “super liberal” who wanted to raise taxes, protect criminals and allow illegal immigration.