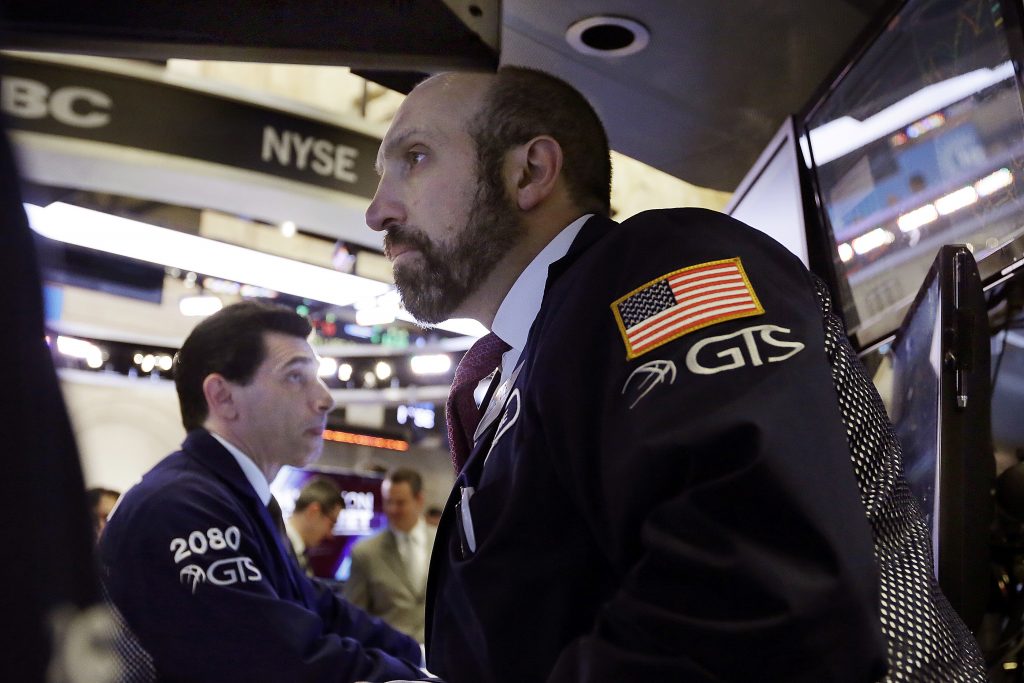 U.S. stocks have shed much of an early gain but are still mostly higher in afternoon trading Wednesday. Carmakers and auto parts suppliers are rising, as are other consumer-focused companies. Energy companies are falling along with crude oil prices, and a sharp drop in IBM sent the Dow Jones industrial average lower.

SHIFT INTO DRIVE: Sellers of cars, auto parts, tires and rental cars climbed after a strong quarter from Genuine Parts. The auto and industrial parts distributor raised its profit forecast for the year, although it acknowledged its U.S. business has been weak. Those stocks plunged earlier this month after automakers reported disappointing March sales, and some investors felt that was a warning sign about spending by consumers.

THE QUOTE: While indications of consumer spending keep going up and down, Brent Schutte, chief investment strategist for Northwestern Mutual Wealth Management, said he thinks the economy will keep growing because wages will start to rise at a faster pace and people will spend more money.

“The consumer is in a very good place from a debt-to-asset standpoint,” he said, after reducing debt in recent years. “When they get wage increases, they’re more likely to spend those in the future than to save them.”

Schutte said that will ultimately help the stock market more than any of President Donald Trump’s proposed pro-growth policies would.

HIGH-TECH TROUBLE: Technology and consulting company IBM slumped after a weak sales report. The company reported $18.16 billion in revenue in the first quarter, and according to FactSet, that was more than $200 million below analysts’ estimates. IBM stock fell $7.69, or 4.5 percent, to $162.36.

OIL: Oil prices dropped after the Energy Information Administration said U.S. crude inventories didn’t shrink as much as investors hoped they would, and the EIA says the stockpiles are larger than normal for this time of year. Benchmark U.S. crude lost $1.48, or 2.8 percent, to $50.93 a barrel in New York. Brent crude, used to price international oils, fell $1.46, or 2.7 percent, to $53.43 per barrel in London.

BONDS: Bond prices fell, reversing most of their gains from a day earlier. The yield on the 10-year Treasury note rose to 2.21 percent from 2.17 percent. That helped banks but hurt high-dividend payers including utilities and household goods companies.

BANK COMEBACK: Wealth management and investment banking firm Morgan Stanley said its profit jumped in the first quarter as its stock and bond trading businesses made about twice as much money as they did one year ago. That continued what’s mostly been a strong first quarter for banks and financial companies. Despite disappointing results from Goldman Sachs Tuesday morning, most have said their trading units did well, and they’re also benefiting from higher interest rates.

ROBOT ROLL CALL: Robotic surgery system maker Intuitive Surgical climbed after its profit and revenue came out ahead of analysts’ projections. The company said shipments of its da Vinci device and surgeries performed with it both jumped. The stock rose $52.79, or 7 percent, to $812.14.

ON THE LAM: Chip equipment maker Lam Research posted a bigger third-quarter profit than investors expected and slightly better sales. Its fourth-quarter forecast was much better than expected, and the stock gained $8.57, or 6.7 percent, to $136. That helped send technology companies higher.