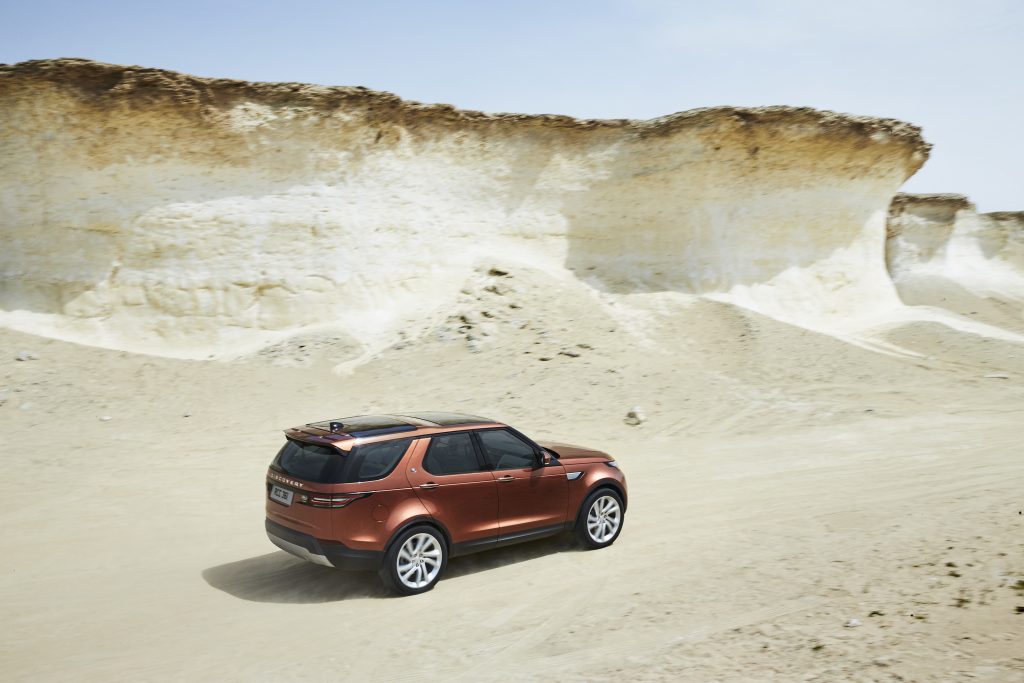 Ready for a sobering thought?

The American Society of Civil Engineers rates America’s infrastructure a solid D-plus. For most of us, this comes as no surprise, as we’ve experienced the effects of congested crumbling highways and outdated airports on a regular basis. Once upon a time, American infrastructure rated a C, but that was during the Reagan administration.

So what better way to make your way through our crumbling neighborhoods than contentedly ensconced in the 2017 Land Rover Discovery? After all, if anyone knows about comfortably riding out a fading empire, it’s the Brits, and the newest Disco delivers the goods.

For instance, should your local water main fail, you’ll be comforted to know that the 2017 Discovery can wade through a maximum of 35.43 inches of water when equipped with the air suspension, or 33.56 inches without it. Did your local freeway crumble? You can confidently drive over the rubble, thanks to the Discovery’s 29.5-degree approach angle, 25.5-degree breakover angle and 28-degree departure angle. Or use what’s called the All-Terrain Progress Control to maintain a succinct creeping speed over the debris. Should your local roads department fail to get your street repaved in time, relax. With Land Rover’s Terrain Response system, you can adjust the Discovery’s driving mode to suit the road conditions, be it mud, ruts, sand, snow or incompetency.

And it will do it without breaking a sweat. After all, this is a Land Rover.

The 2017 Discovery, not to be confused with smaller Discovery Sport, replaces the LR4 in the American Land Rover lineup. It’s on the large end of the midsize category and is offered in five- and seven-passenger configurations. Power comes from a 3.0-liter V-6 fueled with either gasoline producing 340 horsepower or with diesel delivering 332 horsepower. Both engines mate to an eight-speed automatic transmission that transfers its power through a full-time four-wheel-drive system with an automatic locking center differential, two-speed transfer case and a locking rear differential.

It’s placed in a vehicle that uses the same lightweight aluminum architecture employed elsewhere in the Land Rover line, and it yields similar results. So the new Disco weighs about 1,000 pounds less than the outgoing LR4, yet boasts a stiffer structure, which Land Rover officials were eager to prove could be done. If you find yourself angled with a wheel off the ground, you can open the Discovery’s door and shut it again. Don’t try this with just any SUV; that door may not shut.

It’s a neat trick, but it’s the sort of thing expected of a brand that can carry its occupants in amazing comfort through the trickiest of climes.

The leather-lined cabin boasts the sort of niceties you expect at this price point, such as three rows of heated seats, two of which can be cooled. As you’d expect, the second and third row seats fold. What you might not expect is the ability to fold them remotely using a smartphone app. And accessing the third row has never been easier, thanks to the Intelligent Seat Fold system. Touch a button, and the second slides forward and folds out of the way. Order the Disco with an air suspension, and it will lower its ride height by 1.57 inches when you enter or exit the vehicle. And in the name of family harmony, there are nine USB ports; six 12-volt charging points and an in-car 3G Wi-Fi hotspot that supports eight devices.

Of course, given its style, its sophistication comes as no surprise. The Discovery’s new look wears the brand’s current wardrobe while maintaining certain Disco hallmarks, such as the stepped roofline and off-center rear license plate. Yet most of the old boxiness has been banished, leaving only a chic vehicle that carries your family safely across crumbling bridges, through streams, and over sand dunes to the country club.

Just don’t drive over the golf course on the way to the clubhouse. It’s one of the few pieces of infrastructure that’s properly maintained.