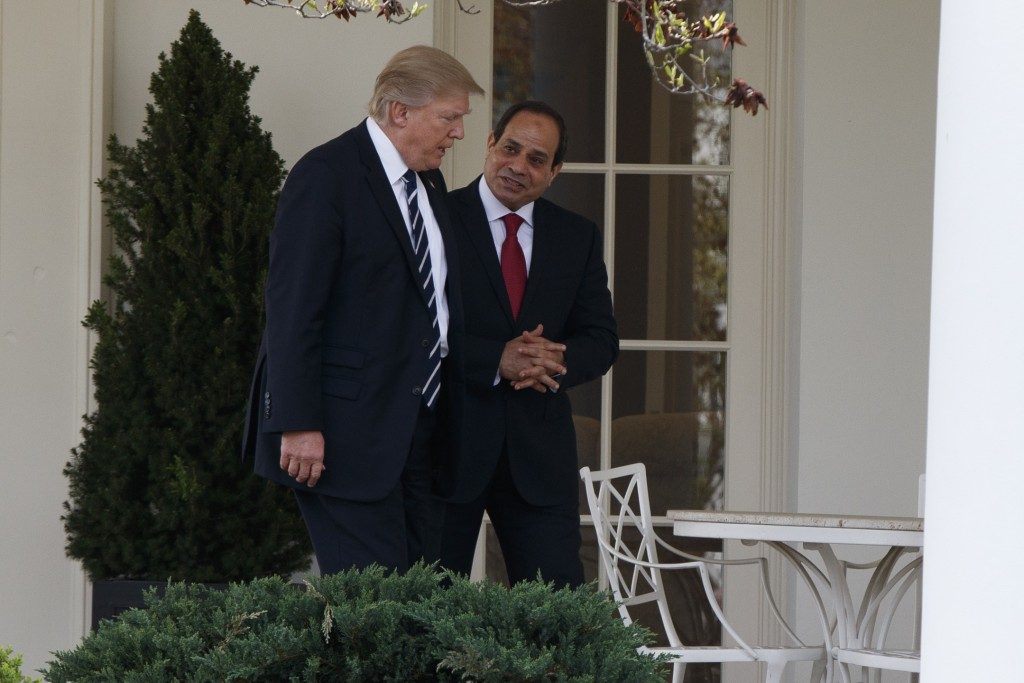 President Donald Trump has surprised many of the pundits in Washington and the Middle East with his energetic pursuit of peace between Israel and the Palestinians.

He has sent Jason Greenblatt, his special representative for international negotiations, to conduct exhaustive talks in Yerushalayim, Ramallah and Amman, where Mr. Greenblatt attended the Arab League conference and met on the sidelines with the foreign ministers of Jordan, Egypt and Qatar.

The result of his efforts has been a steady stream of Arab leaders to the Oval Office. April began with Egyptian President Abdel Fattah al-Sisi arriving for a working meeting with the president, followed a few days later by a visit from Jordan’s King Abdullah II, and winding down the month with the expected visit of PA chairman Mahmoud Abbas.

Anyone who thought the president wouldn’t want to get mired in the Israel-Palestinian imbroglio, which has been political quicksand for every U.S. administration, was wrong. The president said in his campaign that he would apply his deal-making skills to the Middle East, and that’s what he intends to do, despite the obvious risks.

As a businessman, and a very successful one at that, the president understands the importance of the bottom line. As he wrote in one of his books, “The only way you’re going to make the deal you want, is if you’re coming from a position of strength and can convince the other side that you have something they need.”

While former president Barack Obama wasted no time in traveling abroad and bowing down to foreign leaders like Saudi King Abdullah, President Trump has stood tall and broadcast a message of strength about America’s position in the world. But the second part of the Trump formula for success, “convince the other side that you have something they need,” is trickier, especially when the other side doesn’t state clearly what its needs are.

For instance, Egypt’s Sisi and Jordan’s King Abdullah came to Washington with a plan for how to make peace between the Palestinians and Israelis. They reportedly urged renewed talks between the sides, spurred on by “confidence building” measures like Israel’s agreeing to a mass release of terrorists and a building freeze, ideas that failed when Obama insisted on them and which would fail if the current administration did so.

When the Palestinian Authority chairman gets his turn to appeal directly to the president, he will no doubt push for pressure on Israel to accept a two-state solution along the 1967 lines, the division of Yerushalayim, and that it relent in its demands that the Palestinians recognize Israel as a Jewish state.

But the real need for Egypt, Jordan and the Palestinians has nothing to do with Palestinian statehood. It is economic. According to The Economist, Sisi’s government faces large budget and current-account deficits, and his country’s foreign reserves are perilously low. Rounding out the dismal picture is an overvalued currency, double-digit inflation and a jobless rate of 12 percent.

Economic instability sets the stage for political instability, and strengthens the Islamic State and other radical groups that have set out to depose Sisi.

The overall picture is much the same in Jordan.

And, as far as the Palestinian public in Yehudah and Shomron is concerned, the No. 1 priority is bread-and-butter issues — jobs, personal security, decent education and health care — not the right to go to the polls every few years and elect a corrupt Palestinian government.

The mistake of every previous U.S. administration has been to aim too high. Instead of building peace from the ground up, via economic cooperation that produces immediate benefits and builds trust, the diplomats pressed the sides to make concessions they were incapable of making, leading to nothing but frustration.

The most egregious example of this was former U.S. Secretary of State John Kerry’s dramatic announcement in July 2013 that “our objective will be to achieve a final status agreement over the course of the next nine months.”

The way forward is to set aside the intractable issues like borders, Yerushalayim and the “right of return” of Palestinians, and pursue economic agreements that are doable and meet the genuine needs of the region. Such agreements will build peace from the ground up, which is the only way to create a sustainable peace.

They will also bring much needed stability to the region, and keep people like Sisi and King Abdullah, who have cooperated with Israel in economic and security matters, in power.

The obstacle to bringing economic prosperity to the Palestinians lies with their leadership, which, as Dan Diker, a prominent research analyst, told Hamodia in a pre-Pesach interview, has boycotted Israel for fear that benefiting from the fruits of working with Israel would deepen the “occupation.”

Such short-sighted thinking on the part of the PA leadership has denied a chance at prosperity for millions of Palestinian women and children.