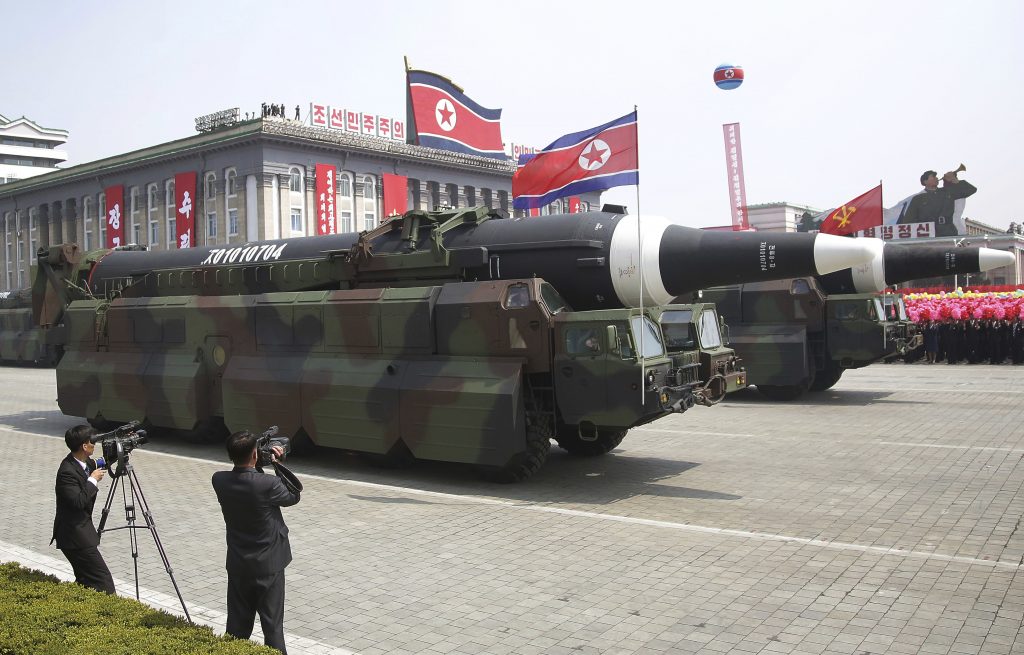 North Korea paraded its intercontinental ballistic missiles in a massive military display in central Pyongyang on Saturday, with ruler Kim Jong Un looking on with delight as his nation flaunted its increasingly sophisticated military hardware amid rising regional tensions.

Kim did not speak during the annual parade, which celebrates the 1912 birthday of his late grandfather Kim Il Sung, North Korea’s founding ruler, but a top official warned that the North would stand up to any threat posed by the United States.

Choe Ryong Hae said President Donald Trump was guilty of “creating a war situation” on the Korean Peninsula by dispatching U.S. forces to the region.

The parade, the annual highlight of North Korea’s most important holiday, came amid growing international worries that North Korea may be preparing for its sixth nuclear test or a major missile launch, such as its first flight test of an ICBM capable of reaching U.S. shores.

But if the parade signaled a readiness for war, North Korea has long insisted that its goal is peace — and survival — with the growing arsenal a way to ensure that the government in Pyongyang is not easily overthrown.

North Korea saw the toppling of Saddam Hussein in Iraq and Moammar Gadhafi in Libya — neither of whom had nuclear weapons — as proof of the weapons’ power.

“It will be the largest of miscalculations if the United States treats us like Iraq and Libya, which are living out miserable fates as victims of aggression, and Syria, which didn’t respond immediately even after it was attacked,” said a Friday statement by the general staff of the North Korean army, according to the official Korean Central News Agency.

Also Friday, North Korea’s vice foreign minister told The Associated Press in an exclusive interview that President Trump’s tweets — he recently tweeted, for example, that the North is “looking for trouble” — have inflamed tensions.

U.S. retaliatory strikes earlier this month against Syria over a chemical weapons attack on civilians, coupled with President Trump’s dispatching of what he called an “armada” of ships to the region, touched off fears in South Korea that the United States was preparing for military action against the North.

Pyongyang has also expressed anger over the ongoing annual spring military exercises the U.S. holds with South Korea, which it considers a rehearsal for invasion.

But U.S. officials told The Associated Press on Friday that the Trump administration had settled on a policy that will emphasize increasing pressure on Pyongyang with the help of China, North Korea’s only major ally, instead of military options or trying to overthrow Kim’s regime.

A U.S. military official, who requested anonymity to discuss planning, said the United States doesn’t intend to use military force against North Korea in response to either a nuclear test or a missile launch.

Kim, wearing a suit and tie, was greeted Saturday with thunderous — and extensively practiced — applause as he stepped into view on a large podium, clapping to acknowledge the thousands of soldiers and civilians taking part in the parade at Kim Il Sung Square.

The parade, an elaborate display of the state’s immense power, involves tens of thousands of participants, from goose-stepping soldiers to crowds of civilians who have spent weeks perfecting their ability to wave plastic flowers in unison.

For outside military analysts, though, the highlight is the weaponry that the North puts on display.

A series of what appeared to be KN-08 missiles were among the weapons rolled out on trucks. Analysts say the missiles could one day be capable of hitting targets as far as the continental United States, although North Korea has yet to flight test them.

The parade also included large rockets covered by canisters in two different types of transporter erector launcher trucks, or TELs. An official from South Korea’s Defense Ministry couldn’t immediately confirm whether any of the rockets represented a new type of ICBM.

Kim Dong-yub, a North Korea expert at Seoul’s Institute for Far Eastern Studies, said the canisters and trucks suggested that the North was developing technology to “cold launch” ICBMs, ejecting them from the canisters before they ignite. This would allow North Korea to prevent its limited number of ICBM-capable launcher trucks from being damaged during launches and also make the missiles harder to detect after they’re fired, he said. Cold launches would also allow the missiles to be fired from silos.

Kim, the analyst, said it’s likely that North Korea is also developing solid-fuel ICBMs, and that some of the rockets inside the canisters on Saturday might have been prototypes.

Other military hardware at the parade included tanks, multiple rocket launchers and artillery, as well as a solid-fuel missile designed to be fired from submarines. Also on display was a powerful midrange missile that can potentially reach U.S. air bases in Guam, which outside analysts call a “Musudan,” as well as a new solid-fuel midrange missile that can be fired from land mobile launchers, making them harder to detect before launch.

Kim Jong Un, a 30-something leader who took power in late 2011 after the death of his father, Kim Jong Il, emphasizes nuclear weapons as the foundation of his national defense strategy. Under his watch, North Korea has aggressively pursued a goal of putting a nuclear warhead on an ICBM capable of reaching the U.S. mainland.

In his annual New Year’s address, Kim said North Korea’s preparations for an ICBM launch had “reached the final stage.” Recent satellite imagery suggests the country could conduct another underground nuclear test at any time.

Other senior officials joining Kim at the parade podium included Kim Won Hong, who the South Korean government had said earlier this year was fired from his job as state security minister, presumably over corruption. South Korea has a spotty record of tracking developments in North Korea, as information about the secretive, authoritarian state is often impossible to confirm.