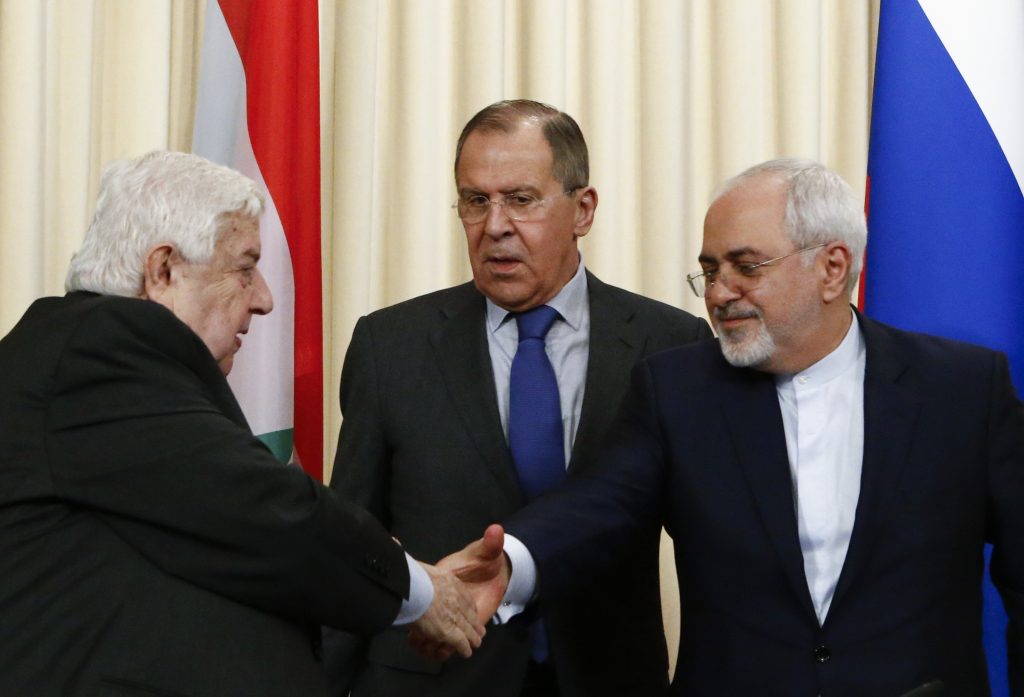 Russia, Syria and Iran strongly warned the United States Friday against launching new strikes on Syria and called for an international probe into last week’s chemical attack there.

Russian Foreign Minister Sergey Lavrov, who hosted his Iranian and Syrian counterparts at a trilateral meeting in Moscow, denounced last week’s U.S. attack on Syria as a “flagrant violation” of international law and warned that any further such action would entail “grave consequences not only for regional but global security.”

Syrian Foreign Minister Walid Moallem said the meeting sent a “strong message” to Washington. Iran’s Mohammad Javad Zarif emphasized that the participants warned that any unilateral action by the U.S. is unacceptable.

The U.S. has blamed the Syrian government for launching a deadly chemical attack in Khan Sheikhoun that killed over 80 people on April 4, and responded by striking a Syrian air base. Russia has alleged that the victims were killed by toxic agents released from a rebel chemical arsenal and warned against putting the blame on Damascus until an independent inquiry has been conducted.

Moscow vetoed a Western draft U.N. resolution Wednesday, saying it failed to mention the need to inspect the area of the attack.

Lavrov on Friday accused the U.S. and its allies of what he described as attempts to stymie an international probe into the attack. He expressed strong skepticism about a preliminary investigation conducted by the U.N. chemical weapons watchdog, saying that its experts have failed to visit the site and it has remained unclear to Russia where the samples have been taken and how they have been analyzed.

In Russia’s view, the probe conducted by the Organization for the Prohibition of Chemical Weapons should be widened to include experts from many nations, he said.

“If our U.S. colleagues and some European nations believe that their version is right, they have no reason to fear the creation of such an independent group,” Lavrov added. “The investigation into this high-profile incident must be transparent and leave no doubt that someone is trying to hide something.”

Lavrov said that the U.S. strike on the Syrian base has undermined peace efforts in Syria and reflected Washington’s focus on ousting Syrian President Bashar Assad’s government. “Such attempts won’t succeed,” Lavrov said.

The three ministers also discussed the beefing up of U.S. forces on Jordan’s border with Syria, Moallem said. He added that Russia, Iran and Syria have “common procedures against any aggression,” but wouldn’t offer any specifics.

Lavrov said that Moscow has asked Washington about the purpose of the buildup and received assurances that they were there to cut supply lines between the Islamic State factions in Syria and Iraq.

“We will keep monitoring the issue, since the only possible reason for using military force on the territory of Syria is to fight terrorism,” Lavrov said.

Russia has staunchly backed Assad’s government throughout a civil war that has dragged into a seventh year. It has conducted an air campaign in Syria since September 2015, saving Assad from imminent collapse and helping reverse military fortunes.