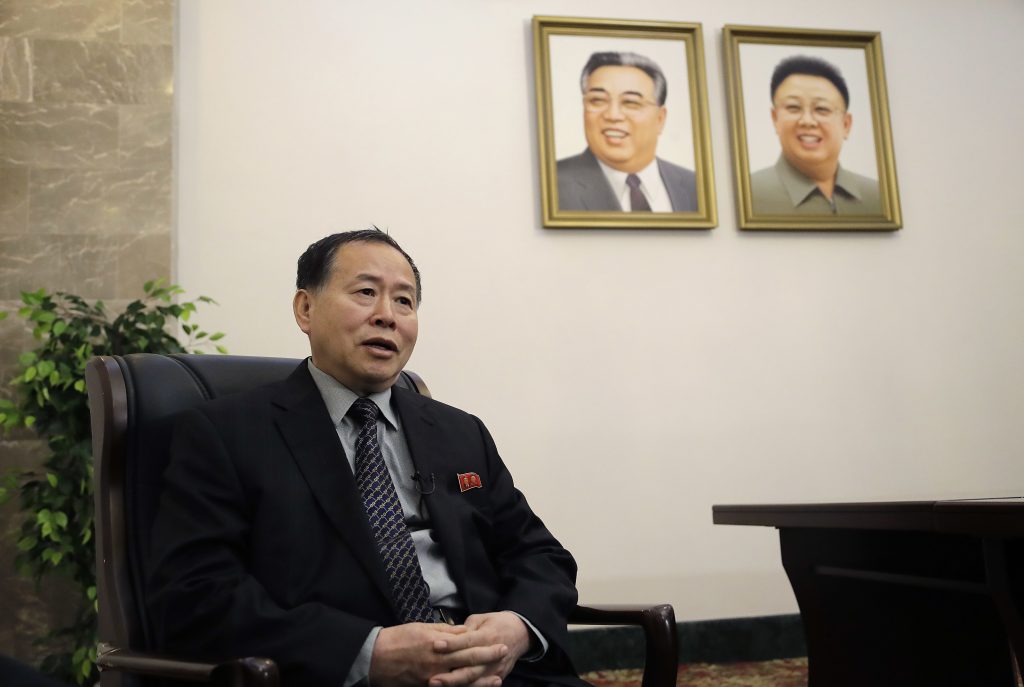 North Korea’s vice foreign minister on Friday blamed President Donald Trump for escalating tensions on the Korean Peninsula through his tweets and expansion of military exercises, saying the U.S. was becoming “more vicious and more aggressive” under his leadership than it had been under President Barack Obama.

In an exclusive interview with The Associated Press in Pyongyang, Vice Minister Han Song Ryol also warned the U.S. against provoking North Korea militarily. “We will go to war if they choose,” he said.

“Now we are comparing Trump’s policy toward the DPRK with the former administration’s and we have concluded that it’s becoming more vicious and more aggressive,” Han said, referring to North Korea by its official name, the Democratic People’s Republic of Korea.

“Whatever comes from U.S. politicians, if their words are designed to overthrow the DPRK system and government, we will categorically reject them,” he said.

Speaking through an interpreter provided by the foreign ministry, Han was calm and polite but forceful throughout the 40-minute interview.

Tensions are deepening as the U.S. has sent an aircraft carrier to waters off the peninsula and is conducting its biggest-ever joint military exercises with South Korea. Pyongyang, meanwhile, recently launched a ballistic missile and some experts say it could conduct another nuclear test at virtually anytime.

“That is something that our headquarters decides,” Han said of what would be North Korea’s sixth nuclear test. “At a time and at a place where the headquarters deems necessary, it will take place.”

Regarding prospects for war, Han said, “If the U.S. comes with reckless military maneuvers, then we will confront it with the DPRK’s pre-emptive strike.

“We’ve got a powerful nuclear deterrent already in our hands, and we certainly will not keep our arms crossed in the face of a U.S. pre-emptive strike.”

Many North Korea watchers believe North Korea could have a viable nuclear warhead and a ballistic missile capable of hitting the U.S. mainland on Trump’s watch as president — within the next few years.

Han, however, said North Korea blames President Trump and the U.S. for the rising tensions. He cited not only the U.S.-South Korean wargames and the deployment of the aircraft carrier, the USS Carl Vinson, but also a tweet President Trump posted Tuesday in which he said the North is “looking for trouble.” President Trump also tweeted that if China doesn’t do its part to rein in Pyongyang’s nuclear ambitions, the U.S. can handle it.

“Trump is always making provocations with his aggressive words,” Han said. “So that’s why. It’s not the DPRK but the U.S. and Trump that makes trouble.”

He dismissed the suggestion President Trump made last year during his presidential campaign that he was willing to meet Kim Jong Un.

“I think that was nothing more than lip service during the campaign to make himself more popular,” Han said.

The annual U.S.-South Korean military exercises have consistently infuriated the North, which views them as rehearsals for an invasion. Washington and Seoul deny that, but reports that exercises have included “decapitation strikes” aimed at the North’s leadership have fanned Pyongyang’s anger.

“As long as the nuclear threats and blackmail go on with the military exercises, we will carry forward with our national defense buildup, the core of which is the nuclear arms buildup,” Han said.

“Whatever comes from the U.S., we will cope with it. We are fully prepared to handle it.”

Outwardly, there are few signs of concern in North Korea despite the political back and forth. Instead, the country is gearing up for its biggest holiday of the year, the 105th anniversary of the birth of the late Kim Il Sung, the country’s founder and leader Kim Jong Un’s grandfather.

The Saturday anniversary may provide the world with a look at some of that arsenal. Expectations are high the North may put its newest missiles on display during a military parade that could be held to mark the event.