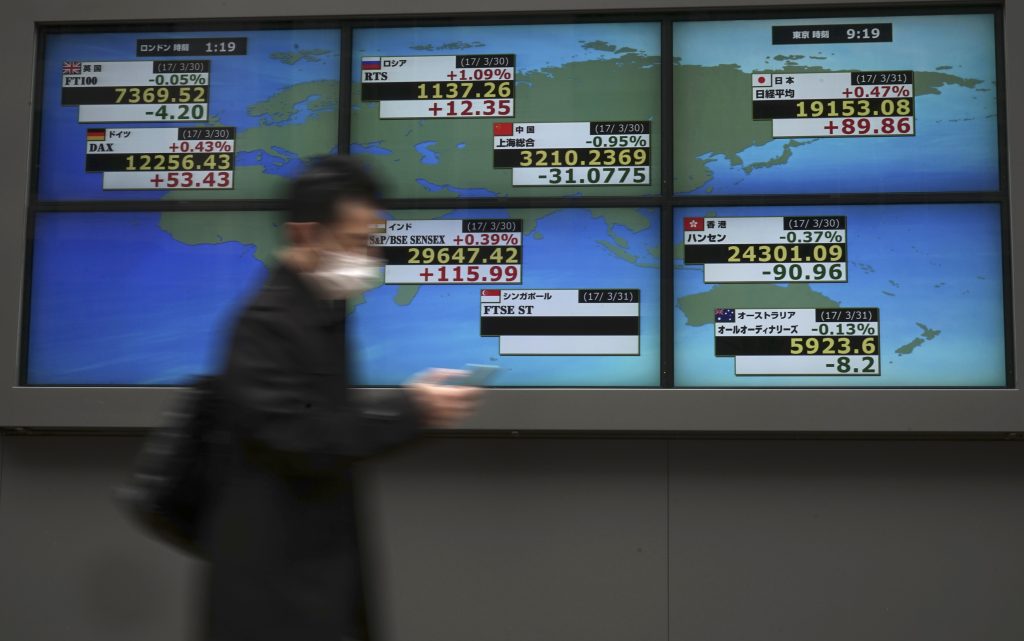 Global stock markets turned lower and the dollar was volatile Thursday after President Donald Trump withdrew a threat to declare China a currency manipulator and said the U.S. currency was “getting too strong.” Tensions over North Korea also weighed on investors ahead of a long weekend in many markets.

President Trump said he won’t declare China a currency manipulator, dropping a key campaign promise. In a newspaper interview and a White House news conference, President Trump hailed the rapport he developed with his Chinese counterpart, Xi Jinping, in meetings last week that seem to have eased trade tensions. A declaration that China manipulates the exchange rate of its yuan to gain a trade advantage could have opened the way to sanctions. “They’re not currency manipulators,” President Trump told The Wall Street Journal, saying Beijing hadn’t been cheating on its currency for months.

On the dollar’s exchange rate against those of major trading partners, President Trump said: “I think our dollar is getting too strong, and partially that’s my fault because people have confidence in me.” He added that “It’s very, very hard to compete when you have a strong dollar and other countries are devaluing their currency.” Those remarks helped push the yen to its highest level since mid-November, just after the presidential election.

“After a few weeks of relative calm, the ‘Trump hurricane’ is back to disrupt the tranquility in the currency markets,” said Margaret Yang of CMC Markets in a commentary. “I describe Trump’s influence on currencies as a hurricane as it’s both harmful and unpredictable. It is debatable whether Trump can have both a weak currency and massive fiscal stimulus at the same time.”

China’s export growth accelerated in March in a positive sign for global demand while import growth cooled. Customs data show exports rose 16.4 percent from a year earlier to $180.6 billion, up from 4 percent growth in the first two months of the year. Imports rose 20.3 percent to $156.6 billion, down from the January-February rate of 26.4 percent.

Benchmark U.S. crude rose 4 cents to $53.15 per barrel in electronic trading on the New York Mercantile Exchange. The contract fell 29 cents on Wednesday. Brent crude, used to price international oils, gained 7 cents to $55.93, having lost 37 cents the previous session. The market took in its stride a report by the International Energy Agency saying that demand growth for oil will slow for a second consecutive year this year.