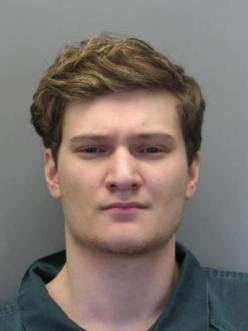 A 20-year-old man from Annandale is facing hate-related charges after a Jewish community center, a church and a community college in Fairfax County was defaced with anti-Semitic graffiti and stickers, police said.

Dylan Mahone was arrested Thursday after hateful graffiti was scrawled across the Jewish Community Center of Northern Virginia in Fairfax City and the Little River United Church of Christ in Annandale on Tuesday, police said.

Mahone was also charged in an incident March 20 in which anti-Semitic fliers were posted around the Annandale campus of Northern Virginia Community College, police said.

Photos of those fliers were posted on a Twitter account for a group called the Aryan Underground, according to a search warrant filed in Fairfax County court. The tweet that accompanied the photos promised “More to Come!”

The search warrant states that surveillance video captured someone putting up the stickers while wearing a mask.

The Aryan Underground account also retweeted a tweet from a TV news station about the defacement of a church and features photos of ant-Semitic stickers placed at another college and high school.

It’s unclear whether Mahone has been tied to those incidents as well.

Mahone was charged with two counts each of felony destruction of property, placing a swastika on a religious property with the intent to intimidate and wearing a mask in public to conceal one’s identity.

Northern Virginia Community College police charged Mahone with one count of felony destruction of property and one count of wearing a mask in public to conceal one’s identity.

Mahone was arrested at his home.