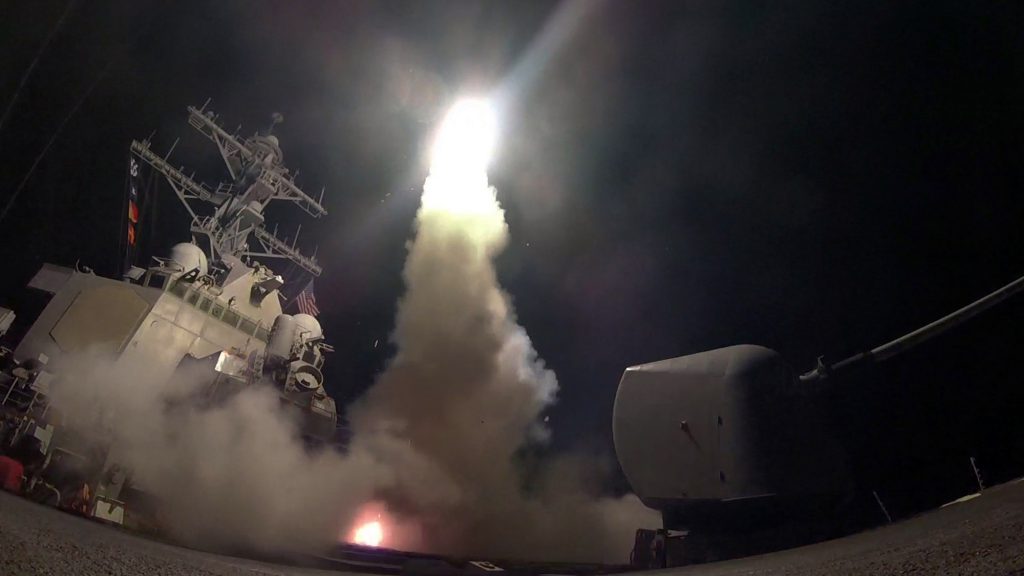 North Korea has vowed to bolster its defenses to protect itself against airstrikes like the ones President Donald Trump ordered against an air base in Syria.

The North called the airstrikes “absolutely unpardonable” and said they prove its nuclear weapons are justified to protect the country against Washington’s “evermore reckless moves for a war.”

The comments were made by a Foreign Ministry official and carried Sunday by North Korea’s state-run Korean Central News Agency. The report did not name the official, which is common in KCNA reports.

The airstrikes, announced shortly after President Trump and Chinese President Xi Jinping wrapped up dinner at a two-day summit in Florida last week, were retaliation against Syrian President Bashar Assad for a chemical weapons attack against civilians caught up in his country’s long civil war.

“Some forces are loud-mouthed that the recent U.S. military attack on Syria is an action of warning us but we are not frightened by it,” the report said, adding that the North’s “tremendous military muscle with a nuclear force as its pivot” will foil any aggression by the U.S.

“We will bolster up in every way our capability for self-defense to cope with the U.S.’s evermore reckless moves for a war and defend ourselves with our own force,” it said.

North Korea has long claimed that the United States is preparing to conduct similar precision strikes against its territory or even launch an all-out invasion. It claims its nuclear weapons are a necessary deterrent to the U.S. military threat.

Washington denies it has any intention of invading the North.

Tensions have been even higher than usual over the past few weeks because annual war games between the U.S. and South Korean militaries are underway. The exercises this year are the biggest ever and have included stealth fighter training and other maneuvers that are particularly sensitive to North Korea.

For its part, the North test-launched a ballistic missile just ahead of the Trump-Xi meeting and has been rumored to be preparing for a possible nuclear test.

The Korean Peninsula remains technically at war since the 1950-53 Korean conflict ended with an armistice, not a formal peace treaty.

North Korea considers Syria an ally. But unlike Syria, experts warn that North Korea has a means of striking back if provoked.

Along with its rapidly advancing nuclear and long-range missile capabilities, the North has its artillery and short-range missiles trained on Seoul, the capital of U.S. ally South Korea and a city of more than 10 million people.