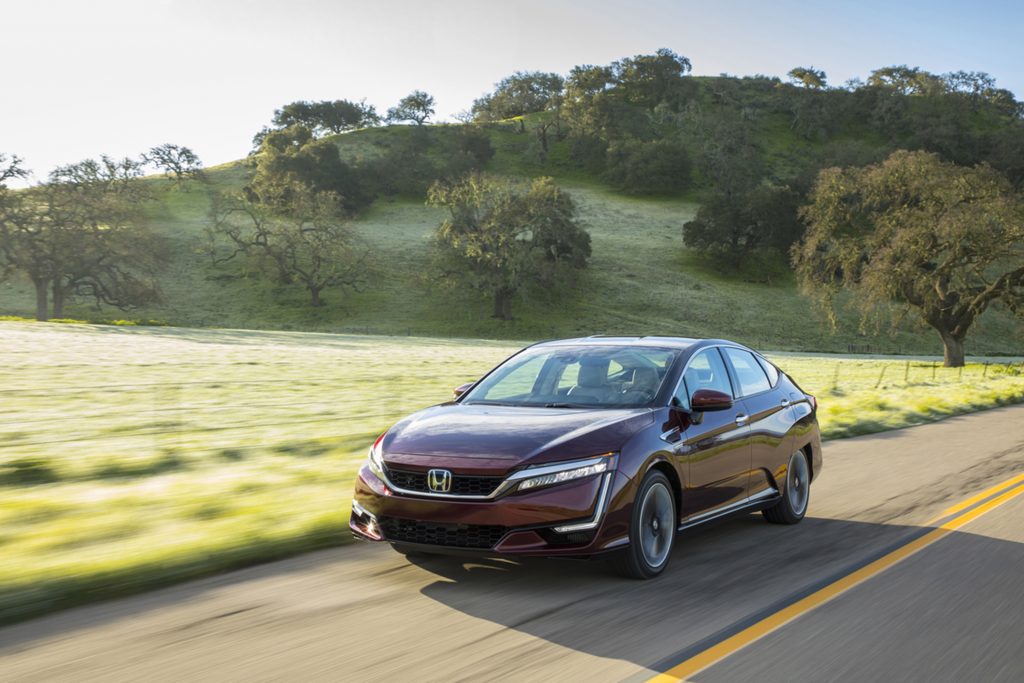 The science experiment is over. Hydrogen fuel cars are real.

Toyota and Hyundai proved it with their Mirai and Tucson FCVs, respectively. Now, Honda has taken the technology a step further. The 2017 Clarity is real, and it’s really fun.

Honda’s fuel-cell entry is a stylish four-door sedan that offers premium cabin comfort and cargo capacity for five passengers and their gear.

This is possible because Honda engineers downsized and repositioned the engine components so they fit under the hood, like on a standard internal combustion engine car — instead of taking up space between the rear seats, or in the trunk area, as they do on other fuel-cell vehicles.

With the engine under the hood, Honda could park the battery under the front seats and two hydrogen tanks under and just behind the rear seats. The remaining real estate is all devoted to human space.

Like its fuel-cell competitors, Honda’s Clarity is powered by a fuel stack that combines on-board compressed hydrogen with oxygen to produce electricity, which then drives an electric motor that propels the car, leaving only water vapor to emit from the tail pipe.

But Honda has taken its Clarity a step beyond the Mirai and Tucson by giving it a Sport driving mode that takes great advantage of the electric motor. In normal mode, the Clarity is a slow, steady, sedate sedan.

But in Sport mode, which emphasizes fun over fuel economy, it’s an energized, engaged driving experience.

Over two days of driving — on city streets, wide-open freeways and curving canyons — I was surprisingly entertained by the Clarity’s punchy acceleration and precise handling.

The Clarity has some luxury and high-tech appointments. The keyless ignition unlocks the vehicle at the touch of the driver’s hand. Rain-sensing wipers engage with the arrival of precipitation. A heads-up display projects vital information onto the windshield. The ultra-suede and simulated wood grain interior and the dash elements all have a quality fit and finish.

The Clarity is connected and ready for Apple Car Play and Android Auto. The HondaLink cellphone app will allow the operator to start the car remotely and get the heater or AC going. It will also find the car, electronically, if the operator parked it while confused by shopping-mall euphoria; it can also find the closest fueling station and provide directions for getting there.

It’s an easy car to drive and, once you get used to the absence of engine sound and vibration, feels like any other mid-range sedan.

The adequate visibility is enhanced by a navigation screen that turns into a rear-view camera not just when the car is in reverse but when the right-turn indicator is engaged — giving the driver added visual assistance when backing up or making a right-hand lane change.

Silent, smooth and responsive, the Clarity got my high marks for performance. I even forgave it for the unappealing exterior design, which seems to suffer from the syndrome that struck the first generation of Porsche Panameras — with the sleek lines extending from the sporty front of the car having to expand to allow for a full-size rear seating area.

Like its rivals, the Clarity’s hydrogen tank can be filled in three to five minutes, from a fueling device that looks and acts a lot like a traditional gas station pump. Range between refills on the Clarity is 366 miles per tank, according to the Environmental Protection Agency — ahead of the Mirai’s range of 312 miles and the Tucson’s 265.

However, also like all hydrogen fuel-cell vehicles, the Clarity’s fast-fueling capacity is limited by the current fuel-cell infrastructure.

As of March 2017, there were only 26 fueling stations open in California — which has by far the densest fuel-cell penetration.

Those numbers are expected to rise, Honda executives and others say. Stephen Ellis, manager of fuel-cell-vehicle marketing for Honda, said an additional 36 stations will be on line, split between Northern and Southern California, by 2018.

Some drivers may experience other range issues. Although Honda is proud of its best-in-class 366 miles of EPA-approved total driving distance, my experience with the Clarity suggested otherwise. So did the experiences of other automotive journalists who shared their reactions to the Clarity with me.

The EPA numbers are based on a calculation of miles driven per kilogram, and then translated to a miles-per-gallon equivalent and multiplied by the size of the fuel tank.

The federal agency’s testers gave the Clarity a 68 mpg-equivalent rating.

I got less than that, probably as a result of the Fleming Leadfoot Factor. I was driving the car mostly in Sport mode, and taking advantage of the peppy performance.

According to the dashboard display, I was going to get well under 366 miles per tank, maybe 100 miles less than that.

Other reviewers had similar experiences. Two told me their test drives seemed to produce something between 240 and 260 miles per tank of fuel. One refilled his tank when it was half full, having gone about 120 miles. Another drove about 280 miles before refilling, while being told by the car that the remaining range was less than 10 miles.

Ellis, asked about the discrepancy, said the displayed range on the car was “weighted heavily on the vehicle’s lifetime fuel economy.”

Drivers who’d borrowed the Clarity before me drove like I did, in other words. The onboard computer adjusted, and predicted a total range of 254 miles when I got into the car with a full tank, based on the way the car had been driven by previous drivers.

Had it been a brand new car, driven EPA-style in Normal mode, Ellis said, the Clarity would likely have predicted a total range of closer to the EPA-approved 366 miles, and then delivered that range.

Could I have achieved something close to that, despite the car’s history, had I driven that way? Could someone else?

Hydrogen fuel-cell-vehicle sales, limited by technology that’s new to most consumers and by the shortage of dealers that sell the cars and fueling stations that fill them, have not been robust.

Toyota said it had moved 1,245 four-seater Mirai fuel-cell cars as of the end of February, almost all of them leased.

Honda isn’t selling its Claritys at all, for the time being, and only offers the cars in California, but with a very appealing lease deal. Wannabe lease holders will pay $369 a month, after a down payment of $2,868, to drive one home.

Any of the three will qualify for a $5,000 cash rebate, and Honda will throw in a $15,000 fuel credit, via a credit card — which the company said should be enough to cover the full three years of the average lease. (Toyota and Hyundai will cover the fueling costs on the Mirai and Tucson.)

That’s a good thing because compressed hydrogen, when calculated on a per-gallon rate, costs three to five times more than gasoline, the equivalent of $9.99 per gallon at some locations, more than $15 at others (though hydrogen-technology boosters insist that, with more widespread adoption, fuel costs will come down).

For expeditions that would take the Clarity beyond its 366-mile refuel range, Honda also offers 21 days of free Avis luxury-car rental over the duration of the lease.

There are many people eager to get their hands on the new cars, with some dealers holding waiting lists with “hundreds” of names, Ellis said.

“We’ve tried to eliminate all the barriers and hurdles,” he said.

Honda executives have said they were trying, with the Clarity, to build a fuel-cell car that offered zero emissions, a long driving range and a comfortable “lounge-like” interior for five full-sized adults.

By those standards, Honda has succeeded. The Clarity isn’t a science experiment anymore. It’s a car, and a good one.

For those not ready for hydrogen, Honda will start offering other Clarity models soon. One will be a late 2017 battery-powered electric, the other a 2018 plug-in hybrid. They’ll look and act a lot more like other low-emission vehicles currently on the road.

But they won’t come with free fuel.

Price as tested: As above