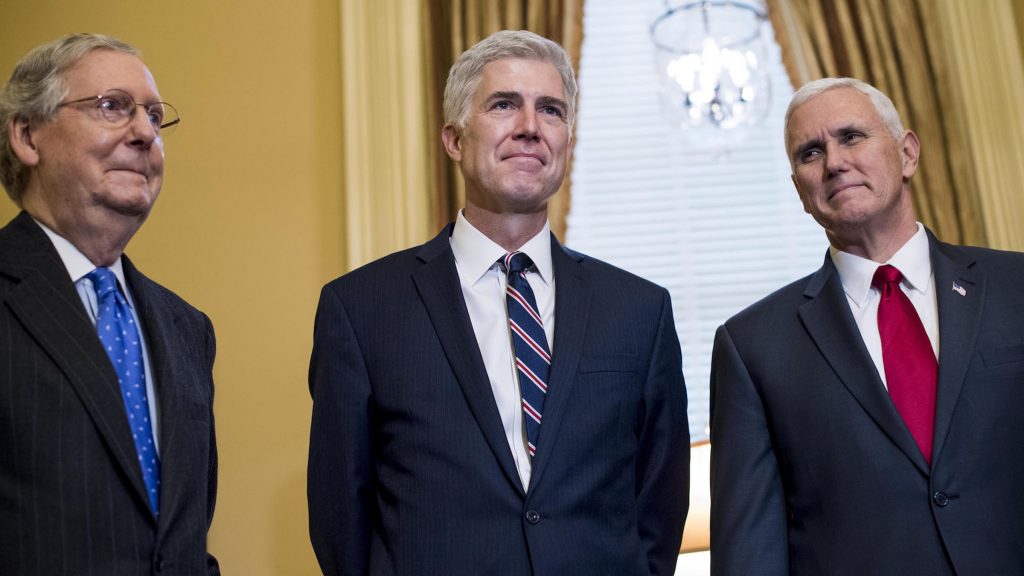 When Donald Trump started thinking during his campaign for the presidency last year about filling a Supreme Court vacancy, he turned to a group of Washington insiders at the controls of a well-oiled machine that puts conservative judges on the bench.

That disciplined network of operatives, shepherded by judicial activist Leonard Leo, on Friday delivered for Trump his first major accomplishment as U.S. president: the confirmation of conservative Neil Gorsuch as a Supreme Court justice.

Unlike the chaotic rollouts of other Trump policy initiatives, the Gorsuch nomination went relatively smoothly. Democrats put up a fight in the Senate, but they lacked the votes to block the Republican majority and they lost.

“It worked because it was all planned out before the nomination. We know what works, what doesn’t work, what resources we need. We know the other side’s arguments and how to answer them. It’s like war,” Leo told Reuters on Friday.

The only surprise stumble in the effort came when Trump attacked judges who blocked his order banning U.S. entry by people from certain Muslim-majority countries. Gorsuch distanced himself from the president’s Twitter messages.

Other than that, discipline was maintained from the first of five meetings that Leo, a veteran of Bush-era judicial confirmation battles, attended with Trump. The two met twice before the election.

Leo helped compile a list of potential nominees for Trump. That helped win over conservative activists unsure of Trump’s ideological compass at a time when he was still fighting for the Republican presidential nomination. A second, longer list came in September. It included Gorsuch, a federal judge.

The campaign for Gorsuch’s confirmation would not have happened without McConnell, who stopped former President Barack Obama, a Democrat, from filling the high court vacancy created when conservative icon Antonin Scalia died in February 2016.

After Trump won the election, he named McGahn, a Washington-based campaign finance lawyer at Jones Day, as White House counsel. Known by his colleagues as “The Quiet Man,” McGahn managed the nomination from inside the administration.

Leo, who reported to McGahn, pushed back against Democrats’ claims that Trump basically out-sourced the nomination process to outside groups. Leo said McGahn carefully scrutinized the lists of nominees and was not simply a rubber stamp.

The Gorsuch campaign got heavy marketing and promotion backing from the Judicial Crisis Network (JCN), a coordinating body for conservative and grassroots groups. It launched $10 million in pro-Gorsuch advertising, targeting in particular Senate Democrats facing re-election contests in 2018.

The JCN was born during the administration of former President George W. Bush, when Republicans realized a strong outside campaign was critical to getting conservatives on the court.

Carrie Severino, the group’s chief counsel, said the fact Trump agreed to stick to the nominees list made her job easier.

“We were prepared for several possibilities, and we had ads, websites, research packets, and much more ready to launch the moment a name was confirmed,” she said.

Leo said conservatives have borrowed techniques from the liberal coalitions that worked to defeat the nomination of Robert Bork by Republican then-President Ronald Reagan in 1987.

At the White House, McGahn and a team in his office held “murder boards” where Gorsuch was bombarded with questions senators might ask. Legislative Affairs Director Marc Short and his team organized visits with senators and worked with Ayotte.

Asked to accompany Gorsuch around Capitol Hill, Ayotte accepted, she said in an interview. Ayotte had lost her re-election bid in November and had criticized Trump. But she helped arrange meetings for Gorsuch with almost 80 senators.

In the end, said sources close to the Gorsuch effort, it worked because it was highly regimented.

Leo said the machine that got Gorsuch on the bench is here to stay although he will return to his job as executive vice president of the Federalist Society, a conservative lawyers’ group. Leo hopes Trump will tap that machine for a possible second nomination during his presidency.