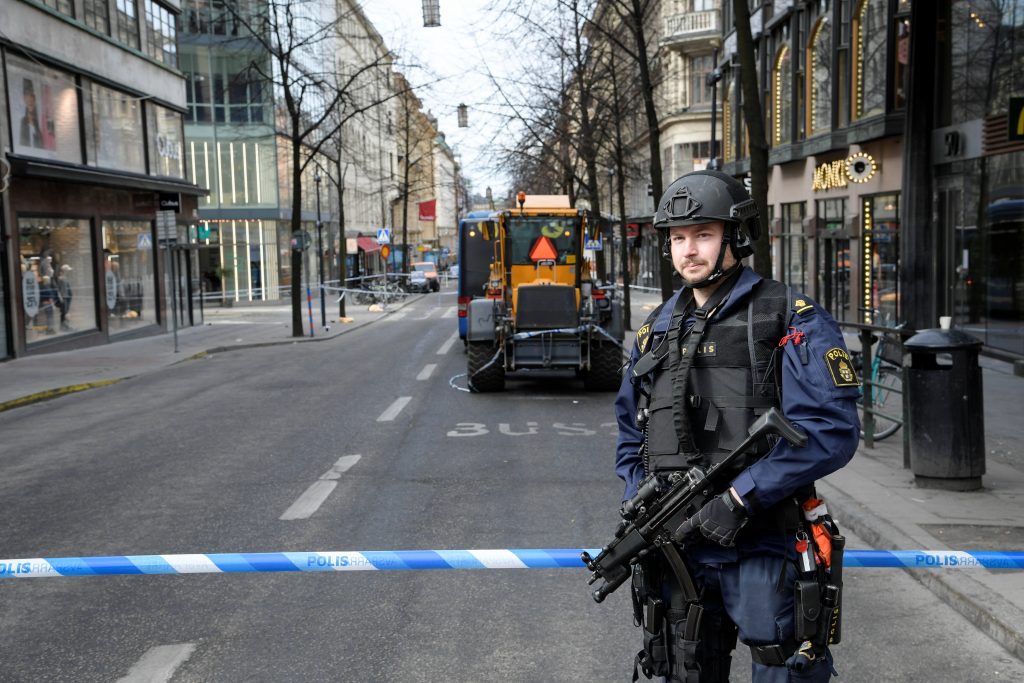 Swedish police arrested a 39-year-old Uzbek man on suspicion of ramming a hijacked beer delivery truck into crowds in central Stockholm, killing four people and wounding 15 in what they called a terror crime.

Police were increasingly confident they had detained the driver of the truck that plowed down a busy shopping street and smashed through a storefront in the heart of the capital on Friday, but did not name him.

“Nothing points to that we have the wrong person; on the contrary, suspicions have strengthened as the investigation has progressed,” Dan Eliasson, head of Sweden’s national police, told a news conference.

“We still cannot rule out that more people are involved.”

The man had previously figured marginally in intelligence material, but had not been linked to extremists.

“We received intelligence last year, but we did not see any links to extremist circles,” Sapo security police chief Anders Thornberg said.

Eliasson said there were “clear similarities” to an attack last month in London in which five people were killed.

Vehicles have also been used as weapons in Nice and Berlin in the past year in attacks claimed by the Islamic State terror group.

There was no immediate claim of responsibility for the attack in Sweden, which has so far been largely immune from any major incidents of this kind, and police said they tightened security around the nation.

“I think it was just a matter of time, but still one doesn’t think it will happen,” Cecilia Hansson, a 25-year-old nurse, said. “It’s still unreal when it happens this close.”

Police said they had found a suspicious device in the vehicle but said they did not yet know if it was a homemade bomb, as reported by public broadcaster SVT.

SVT said the bomb may have partly exploded, burning the driver, who escaped in the ensuing chaos after mowing through crowds and ramming into the Ahlens department store.

Local authorities in the capital, where flags flew at half mast on buildings including the parliament and royal palace, said that 10 people, including a child, were still being treated in the hospital, with two adults in intensive care.

A gaping hole in the wall of the store showed the force of the impact from the truck, which was removed overnight for examination by forensics experts. Dozens of people gathered to pay their respects and leave flowers, stunned by the attack.

Prime Minister Stefan Lofven visited the site and struck a defiant tone. “All of us feel anger over what has happened, I also feel the same anger, but we also need to use that anger for something constructive and go forward,” he said.

“We want – and I am convinced the Swedish people also want – to live a normal life. We are an open, democratic society and that is what we will remain.”

The attack was the latest to hit the Nordic region after shootings in the Danish capital Copenhagen killed three people in 2015 and put the country on high alert and the bombing and shooting in 2011 by far-right extremist Anders Behring Breivik that killed 77 people in Norway.

Although Sweden has not seen a large-scale attack, a failed suicide bombing in December 2010 took place only a few hundred yards from the site of Friday’s incident.

“It is very hard if it is a single individual who is not part of a wider conspiracy or a more organized planning,” Thornberg, head of the Sapo security police, told Swedish radio. “But we have to find these individuals as well.”

Police in Norway’s largest cities and at Oslo airport will carry weapons until further notice following the attack.

Al-Qaida urged its followers to use trucks as a weapon in 2010 and Islamic State claimed responsibility for an attack in Nice, France, in July 2016, when a truck killed 86 people celebrating Bastille Day, and one in Berlin in December, when a truck smashed through a busy market, killing 12 people.

In last month’s attack in London, a man drove into pedestrians on Westminster Bridge near Britain’s parliament and then stabbed a policeman to death.

Neutral Sweden has not fought a war in more than 200 years, but its military has taken part in U.N. peacekeeping missions in several conflict zones, including Iraq, Mali and Afghanistan.