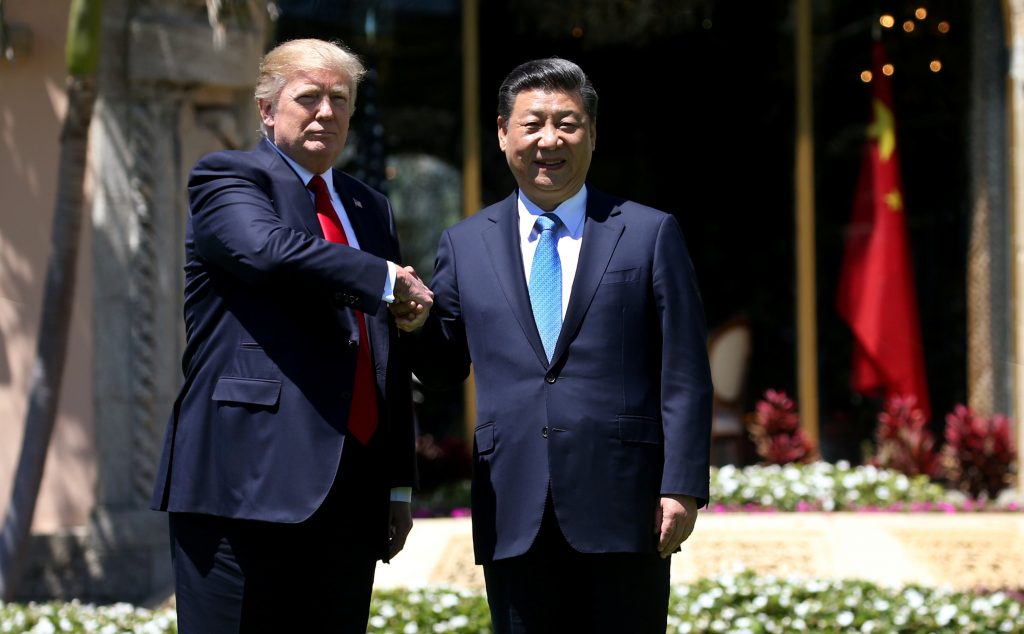 President Donald Trump pressed Chinese President Xi Jinping to do more to curb North Korea’s nuclear program and help reduce the gaping U.S. trade deficit with Beijing in talks on Friday, even as he toned down the strident anti-China rhetoric of his election campaign.

President Trump spoke publicly of progress on a range of issues in his first U.S.-China summit – as did several of his top aides – but they provided few concrete specifics other than China’s agreement to work together to narrow disagreements and find common ground for cooperation.

As the two leaders wrapped up a Florida summit overshadowed by U.S. missile strikes in Syria, President Xi joined President Trump in stressing the positive mood of the meetings while papering over deep differences that have caused friction between the world’s two biggest economies.

President Trump’s aides insisted he had made good on his pledge to raise concerns about China’s trade practices and said there was some headway, with President Xi agreeing to a 100-day plan for trade talks aimed at boosting U.S. exports and reducing China’s trade surplus with the United States.

Speaking after the two-day summit at President Trump’s Mar-a-Lago resort in Florida, U.S. Secretary of State Rex Tillerson also said that President Xi had agreed to increased cooperation in reining in North Korea’s missile and nuclear programs – though he did not offer any new formula for cracking Pyongyang’s defiant attitude.

President Trump had promised during the campaign to stop what he called the theft of American jobs by China. Many blue-collar workers helped propel him to his unexpected election victory and President Trump is under pressure to deliver for them.

The president tweeted last week that the United States could no longer tolerate massive trade deficits and job losses and that his meeting with President Xi “will be a very difficult one.”

On Friday, President Trump not only set a different tone but also avoided any public lapses in protocol that Chinese officials had feared could embarrass their leader.

“We have made tremendous progress in our relationship with China,” President Trump told reporters as the two delegations met around tables flanked by large U.S. and Chinese flags. “We will be making additional progress. The relationship developed by President Xi and myself I think is outstanding.

“And I believe lots of very potentially bad problems will be going away,” he added, without providing details.

“We have engaged in deeper understanding, and have built a trust,” he said. “I believe we will keep developing in a stable way to form friendly relations … For the peace and stability of the world, we will also fulfill our historical responsibility.”

“Well, I agree with you 100 percent,” President Trump replied.

China’s official Xinhua news agency said President Xi had encouraged the United States to take part in the “One Belt, One Road” plan, President Xi’s signature foreign policy initiative aimed at infrastructure development across Asia, Africa and Europe, seen in some policy circles as a partial answer to the pivot to Asia strategy of President Trump’s predecessor Barack Obama.

President Xi also hailed military to military exchanges and said China and the United States should “make good use of the dialogue mechanism to be established between the two countries’ joint staffs of the armed forces,” although Xinhua did not give further details.

Chinese state media on Saturday cheered the meeting as one that showed the world that confrontation between the two powers was not inevitable and established the tone for the development of U.S.-China relations.

But in a sign that rough spots remained, Tillerson afterwards described the discussions as “very frank and candid.”

“President Trump and President Xi agreed to work in concert to expand areas of cooperation while managing differences based on mutual respect,” he said.

Tillerson said President Trump had accepted President Xi’s invitation to visit China and that they also agreed to upgrade a U.S.-China dialogue by putting the two presidents at the head of the forum.

U.S. Commerce Secretary Wilbur Ross said the Chinese had expressed an interest in reducing China’s trade surplus as a way of controlling their own inflation. “That’s the first time I’ve heard them say that in a bilateral context,” he said.

Ross declined to say whether the United States was ready to designate China a currency manipulator, however, referring to an upcoming report in which that issue would be addressed.

The highly anticipated U.S.-China summit was upstaged by U.S. missile strikes against a Syrian air base from which President Trump said a deadly chemical weapon attack had been launched earlier in the week. It was the first direct U.S. assault on the Russian-backed government of Syrian President Bashar al-Assad in six years of civil war.

The swift action in Syria could be interpreted as a signal, especially to defiant nuclear-armed North Korea – and by extension, its ally China – as well as other countries like Iran and Russia, of Trump’s willingness to use military force. North Korea is developing missiles capable of hitting the United States.

He said President Trump also raised U.S.concerns about China’s activities in the South China Sea. Beijing is building and fortifying islands in pursuit of expansive territorial claims in the strategic waterway.