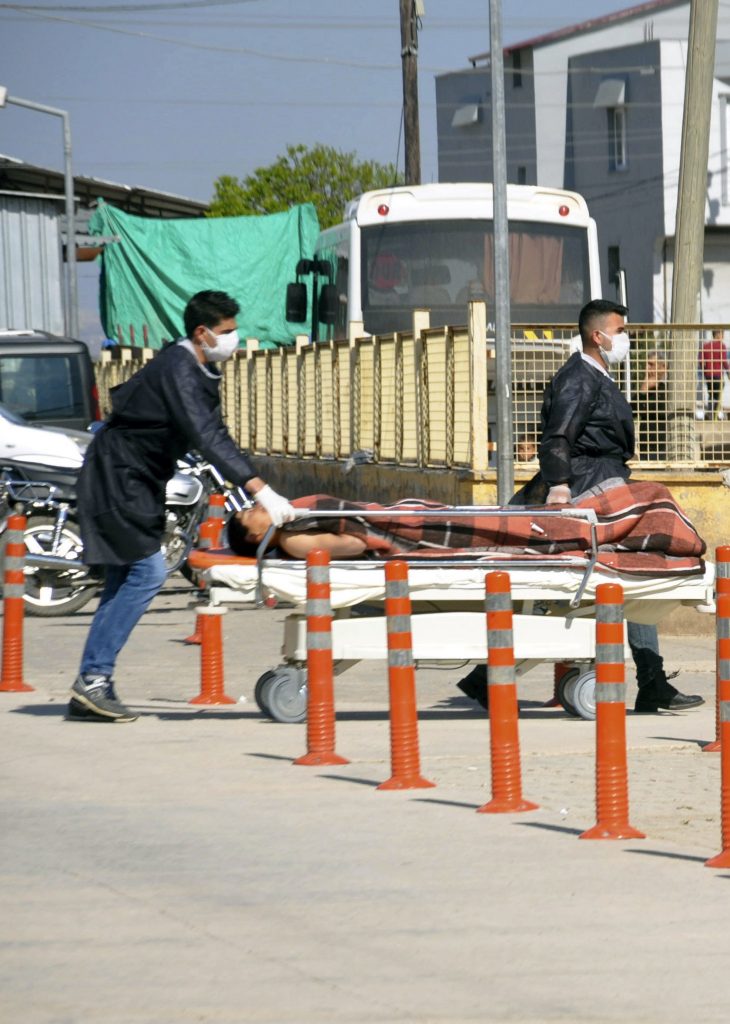 Turkey said Thursday that autopsies of Syrian victims from this week’s assault in Syria’s Idlib province show they were subjected to chemical weapons, as France’s foreign minister called for the prosecution of President Bashar Assad’s government amid growing international outrage over the assault that activists say killed 86 people.

Syria maintains it didn’t use chemical weapons, instead blaming the rebels for stockpiling the deadly substance.

“I stress, once again, that the Syrian Arab Army did not and will not use such weapons even against the terrorists who are targeting our people,” Syria’s Foreign Minister Walid Moallem told reporters in Damascus.

In Turkey, state-run Anadolu and the private DHA news agencies quoted Justice Minister Bekir Bozdag as saying that “it was determined after the autopsy that a chemical weapon was used.”

Later on Thursday, the Turkish Health Ministry issued a statement saying that “according to the results of the first analysis, there were findings suggesting that the patients were exposed to chemical substance (sarin).” The statement also said the Organization for the Prohibition of Chemical Weapons would also test the samples in The Hague.

Turkish officials say that close to 60 victims of the attack were brought to Turkey for treatment and three of them died.

Tuesday’s attack happened just 60 miles from the Turkish border, and the Turkish government — a close ally of Syrian rebels — set up a decontamination center at a border crossing in the province of Hatay, where the victims were initially treated before being moved to hospitals.

Russian President Vladimir Putin warned against apportioning blame for the attack until an investigation has been carried out.

Asked whether his country would give access to a fact-finding mission over the use of chemical weapons, Moallem said: “Our experiences with international investigating committees were not encouraging, because they come out of Damascus with certain indications which then change at their headquarters.”

He said Damascus wants guarantees that any investigation would be impartial and non-politicized. He also said such a committee should start from Damascus and not from Turkey. “Once we reach convincing answers we will give our answer,” he said.

The area of the town is difficult to access and as more time passes in the aftermath of the attack, it will be increasingly difficult to determine exactly what happened.

Turkish media have reported that World Health Organization experts took part in the autopsies of Syrian victims conducted in a hospital in the Turkish city of Adana late Wednesday.

The top humanitarian aid official with the U.N.’s Syria office said he believes an awareness of the need to protect civilians is “sinking in” after the Khan Sheikhoun attack.

Jan Egeland expressed hopes for a “watershed moment” with “all of these world leaders saying that they have again woken up to the suffering of the civilians that we see every day.” Egeland spoke to reporters on Thursday after a meeting of the U.N.’s humanitarian “task force” for Syria.

He said the world body needs a “green light” to reach 1 million people in hard-to-reach and besieged areas of the war-torn country. He also called for 72-hour ceasefires in the key zones of fighting so aid can get in, and protection for hospitals and evacuees who choose to leave violent areas voluntarily.

In France, Foreign Minister Jean-Marc Ayrault urged for a resumption of Syrian peace talks and said he wants Assad’s government prosecuted over its alleged use of chemical weapons.

He told CNews television on Thursday that a new U.N. resolution and Syrian peace negotiations should be a top priority — not rushing into new military interventions. Ayrault said that “France is still seeking to talk with its partners on the Security Council … Russia in particular.”

“These crimes must not remain unpunished. … One day, international justice will rule on Assad,” Ayrault said.

Russia argued at a U.N. Security Council meeting on Wednesday against holding Assad’s government responsible for the Idlib attack. The U.S. ambassador to the United Nations, Nikki Haley, warned that the Trump administration could take action if the Security Council did not.

At U.N. headquarters on Thursday, key Security Council members, including the U.S. and Russia, were meeting behind closed doors to try to reach agreement on a resolution that would condemn the attack and authorize an independent investigation. Britain’s deputy ambassador Peter Wilson said “what we want is a unanimous resolution … and we want to see this done soon.”

U.S. President Donald Trump and other world leaders said the Syrian government was to blame, but Moscow, a key ally of Assad, said the assault was caused by a Syrian airstrike that hit a rebel stockpile of chemical arms.

The effects of the attack overwhelmed hospitals around the town, leading paramedics to send patients to medical facilities across rebel-held areas in northern Syria, as well as to Turkey. The Britain-based Syrian Observatory for Human Rights monitoring group put the toll so far at 86 killed.

Victims of the attack showed signs of nerve gas exposure, the World Health Organization and Doctors Without Borders said. Paramedics were using fire hoses to wash the chemicals from the bodies of victims.

The visuals from the scene were reminiscent of a 2013 nerve gas attack on the suburbs of Damascus that left hundreds dead.