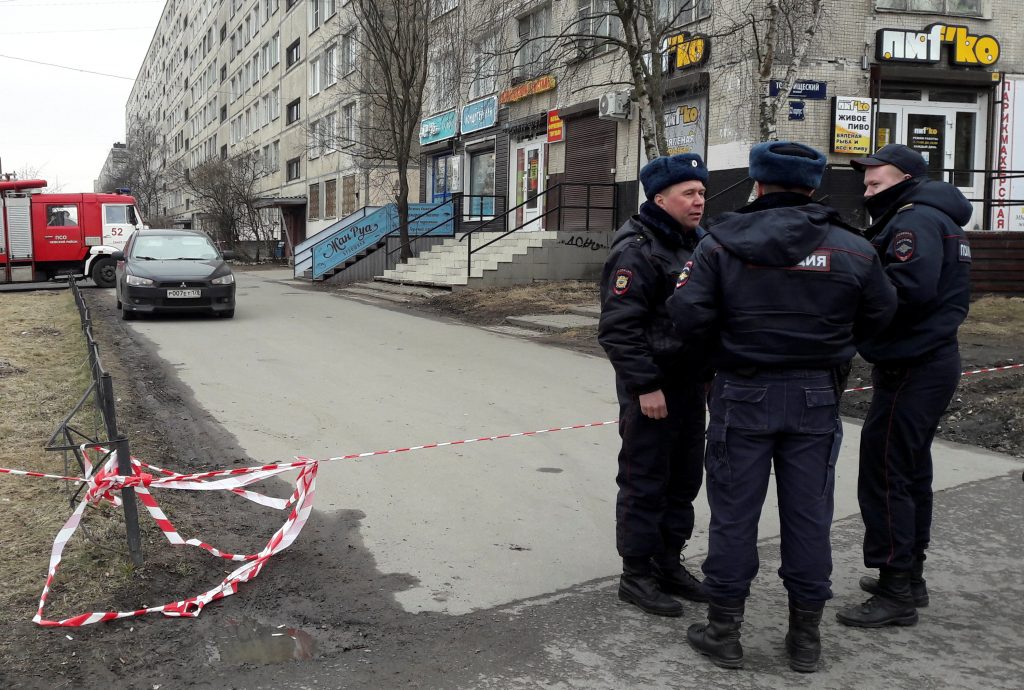 Russian authorities raided a residential building in St Petersburg on Thursday and found explosives similar to those used by a suicide bomber who this week blew up a train car killing 14 people, two security sources said.

The discovery of the explosives raises the possibility that a string of bomb attacks was being planned in the city involving a group of plotters.

The explosives were discovered when security officials raided an apartment building in the city. They detained several people, according to a neighbor who saw the detentions taking place.

Russian investigators said they had detained several suspected accomplices of Akbarzhon Jalilov, born in mainly Muslim Kyrgyzstan, who is the suspected bomber in Monday’s metro blast.

It was not immediately clear if the suspected accomplices were the same people detained at the apartment building.

Security officials searching the apartment complex where the men were detained also found an explosive device there. Bomb disposal experts made the device safe after evacuating people living in apartments on two stairwells.

“We were told: The house is mined; get out quickly,” one woman, who only gave her name as Tatiana and lives in the building, told Reuters.

Another resident, who gave his name only as Anatoly, said he had seen police detain four young men occupying an eighth-floor apartment next to his own. Vasily, another neighbor, said that “many people” had lived in the apartment, and the detainees looked to be around 30.

The two security sources said that the explosives discovered at the building, in the east of the city, bore similarities to a bomb which was found on Monday inside a fire extinguisher at St Petersburg’s Ploshchad Vosstaniya metro station.

That bomb did not detonate. State investigators said they believed the device had been left at Ploshchad Vosstaniya by Jalilov before he went on to another part of the subway network and detonated another bomb he was carrying.

Russian is still reeling after the Monday attack that took place on the day Russian President Vladimir Putin was visiting St Petersburg, his home city.

The attack has put renewed focus on the large number of emigres from mostly Muslim central Asian states, who have moved to Russia to work.

It said it had identified several people of central Asian origin who had been in touch with Akbarzhon Jalilov, the main suspect. A search of the suspects’ homes had turned up objects that were important for the investigation, it said.

It was unclear if those detained at the site of Thursday’s bomb scare were the suspected accomplices identified by the investigative committee. None of the detainees’ neighbors said they had ever seen Jalilov, who was born in Osh, southern Kyrgyzstan, but held a Russian passport.

Kyrgyz authorities have so far failed to turn up evidence of links between Jalilov and Islamist radicals, sources in the capital, Bishkek, and in Osh told Reuters.

They said they could not confirm a report by Russian agency Interfax, that Jalilov had tried to cross into Syria via Turkey in February after a visit to Osh.

Jalilov’s relatives told Reuters that the young man had spent about 10 days with his family during his visit and had not gone out much.