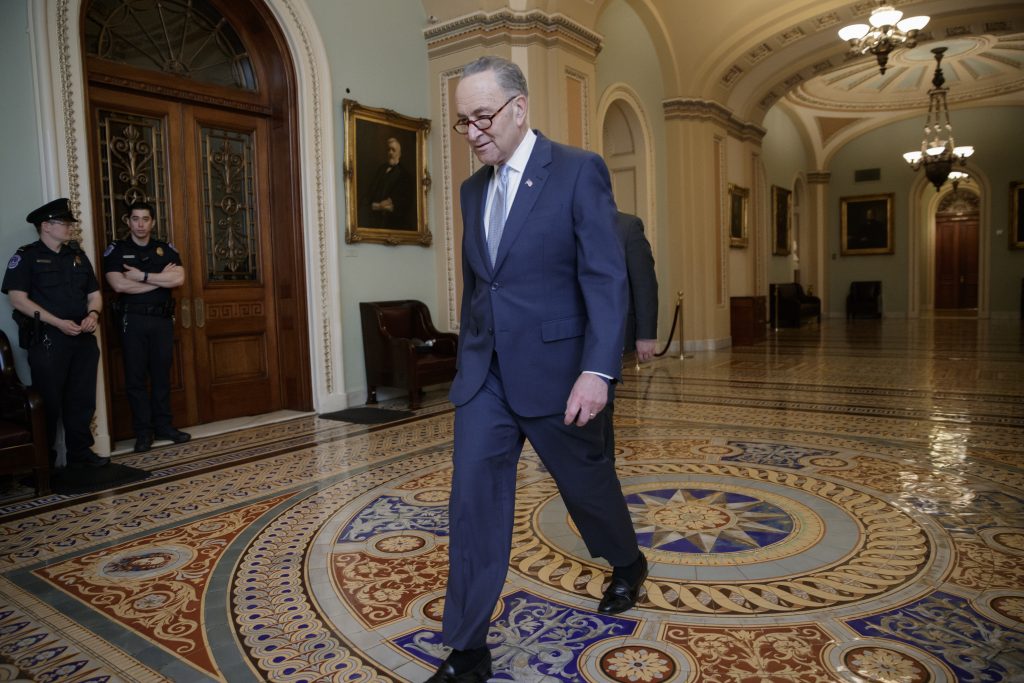 The Senate has voted to invoke the “nuclear option” and eliminate the filibuster for President Donald Trump’s Supreme Court nominee and future Court picks, after Democrats blocked the nomination of Judge Neil Gorsuch with a historic filibuster on the Senate floor Thursday.

The “cloture” vote to cut off debate and send Judge Gorsuch’s nomination to a final floor vote was 55-45, short of the 60 needed. All 44 Democrats and independents voted against advancing Gorsuch, and for procedural reasons, Senate Majority Leader Mitch McConnell cast his vote with them to enable the vote to be reconsidered.

Many senators voted from their seats, a rare and theatrical occurrence, then stayed in the chamber for the drama yet to unfold.

Senate Majority Leader Mitch McConnell then raised a point of order to change the rules allowing a filibuster of a Supreme Court nomination, “under the precedent set on Nov. 21, 2013,” when Senate Democrats who were then in the majority made the same move for lower-court and executive-branch nominations. The vote passed 52-48, in a move could change the Senate and Supreme Court for generations.

The Senate is expected to confirm Gorsuch to the Court on Friday. Gorsuch would take his seat on the Court later this month, in time to hear the final cases of the term.

The maneuvering played out with much hand-wringing from all sides about the future of the Senate, as well as unusually bitter accusations and counter-accusations as each side blamed the other for bringing the Senate to this point.

McConnell accused Democrats of forcing his hand by filibustering a highly qualified nominee in Gorsuch, 49, a 10-year veteran of the 10th U.S. Circuit Court of Appeals in Denver with a consistently conservative record. McConnell vowed that the rules change would block the Gorsuch filibuster, and all future ones, a change many lawmakers lamented could lead to an even more polarized Senate, court and country.

“This will be the first, and last, partisan filibuster of a Supreme Court nominee,” McConnell insisted. “This is the latest escalation in the left’s never-ending judicial war, the most audacious yet, and it cannot and will not stand.”

Supreme Court filibusters have been nearly unheard-of in the Senate, but the confrontation is playing out amid an explosive political atmosphere, with Democrats desperate to throw up roadblocks in a government in which the White House and both houses of Congress are controlled by Republicans.

Democrats remain livid over McConnell’s decision last year to deny consideration to then-President Barack Obama’s Supreme Court nominee, Judge Merrick Garland, who was ignored for nearly a year by Senate Republicans after the death of Justice Antonin Scalia. Instead, McConnell kept Scalia’s seat open, a calculation that is now paying off hugely for Republicans and Trump, who will be able to claim the biggest victory of his presidency to date if Gorsuch is confirmed as expected.

“We believe that what Republicans did to Merrick Garland was worse than a filibuster,” declared Senate Minority Leader Chuck Schumer, D-N.Y. “We didn’t hear two words in the long speech of Senator McConnell: Merrick Garland.”

Schumer said that the “nuclear option means the end of a long history of consensus on Supreme Court nominations,” and that “it weakens the standing of the Senate as a whole.”

Emotions were running high ahead of the votes, with raised voices on the floor where proceedings are normally sedate. All involved were keenly aware of the long-term implications of the proceedings, some of them hard to predict for the future of Trump’s presidency and the 2018 midterm elections, when Republicans will be defending their slim 52-48 Senate majority and 10 vulnerable Democrats in states Trump won will be up for re-election.

Senators on both sides of the aisle lamented the trajectory they were on toward the Senate rules change, though they themselves were in position to prevent it from happening and failed to do so.

Moderate Republican Sen. Susan Collins of Maine said roughly 10 senators of both parties worked over the weekend to come up with a deal to stave off the nuclear option but couldn’t come to agreement. In 2005, a bipartisan deal headed off GOP plans to remove the filibuster barrier for lower-court nominees, but in 2013 Democrats took the step, leaving the filibuster in place only for Supreme Court justices.

“I fear that someday we will regret what we are about to do. In fact, I am confident we will,” said Sen. John McCain, R-Ariz. “It is imperative we have a functioning Senate where the rights of the minority are protected regardless of which party is in power at the time.”

Nonetheless, McCain was prepared to vote with McConnell on the rules change, saying he felt he had no choice.