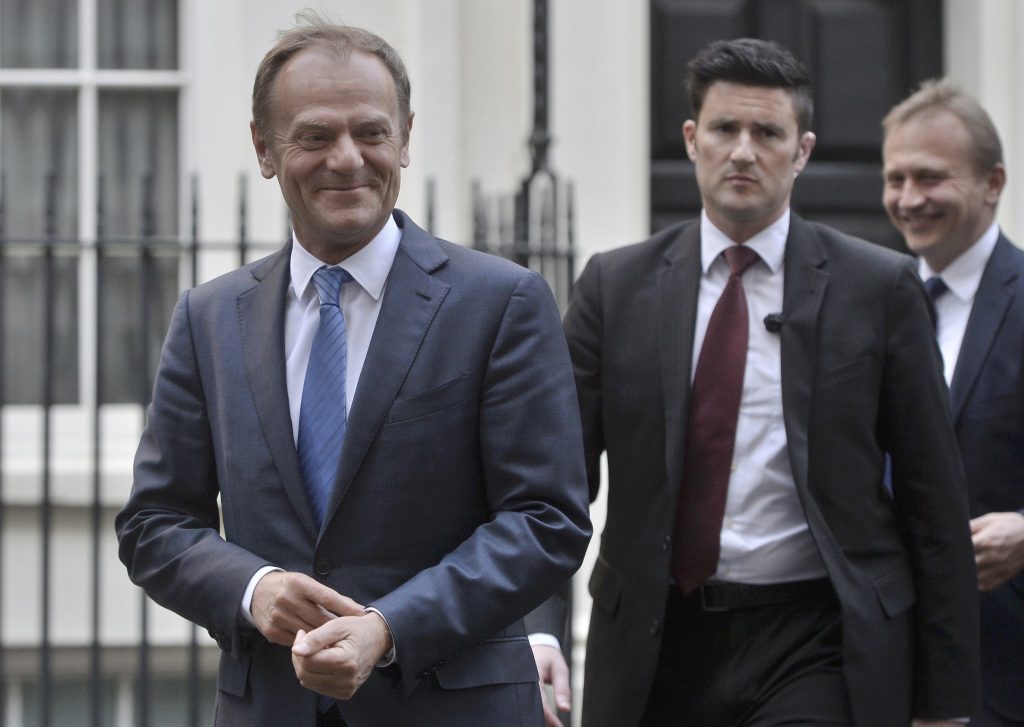 Theresa May and Donald Tusk agreed to look for ways to ease tensions as Britain leaves the European Union, after a week in which a senior member of her party discussed the possibility of war with Spain over Gibraltar.

After their first face-to-face talks since the prime minister triggered the formal Brexit process, both sides said they want to maintain good relations. Politicians and newspapers in Britain expressed outrage earlier in the week that the EU’s negotiating principles made a specific mention of Gibraltar, a British territory on the southern tip of Spain.

When May met Tusk, she reiterated Britain’s position that Gibraltar’s sovereignty couldn’t change without the consent of its people, according to her office. On Tusk’s side, an EU official said they’d agreed that they could avoid issues escalating by staying in contact.

“The prime minister reiterated the U.K.’s desire to ensure a deep and special partnership with the EU following its exit, and noted the constructive approach set out by the Council in its draft guidelines published last week,” May’s office said. “Both leaders agreed that the tone of discussions had been positive on both sides, and agreed that they would seek to remain in close touch as the negotiations progressed.”

Concerns over the status of Gibraltar were ignited late last week when the EU gave Spain an effective veto over whether any Brexit deal would also apply to the enclave in the Mediterranean. On Sunday, Michael Howard, a former Conservative Party leader, suggested that Britain would go to war to defend Gibraltarians against Spain’s claims to sovereignty.

The two-hour meeting at May’s Downing Street office early Thursday afternoon gave May and Tusk the chance to discuss how negotiations will proceed. There was no comment about whether they’d managed to find a compromise on the order in which things should be discussed.

Substantive talks can’t begin until May 22, when EU governments are set to approve the final negotiating directives. In draft guidelines circulated to the bloc’s 27 other capitals, Tusk said a free-trade agreement can only be finalized after the U.K. has left the bloc. He said later he hoped that “sufficient progress” will be made by this fall to allow preliminary trade discussions to start. May wants parallel talks on the exit and future relationship.

In Berlin, German Chancellor Angela Merkel met with her Irish counterpart and stressed the importance of approaching talks constructively.

“We know that a lot is at stake for all sides,” she said. “Of course we will defend the interests of the 27, but we want to remain good partners, because we rely on each other on defense and of course on our economic ties.”

She added that as a first step, “we want a positive settlement of all obligations. At a second stage, we will discuss our future relationship.”

‘The longer I think about it, the longer we study all the topics that need to be studied, the more worried I get,” he said. “It is hugely complex and it is going to take a lot of effort from both sides to try to manage it.”

Another sticking point is whether security cooperation should be part of the negotiations. May insisted this week that she had been right to raise the issue when she triggered Brexit, because it was important to establish how systems would work once the U.K. has left the EU. But Tusk has said he won’t allow it to be a bargaining chip for a trade deal.

May has also said she wants an early agreement to secure the rights of EU citizens living in the U.K. and those of British citizens in the EU.