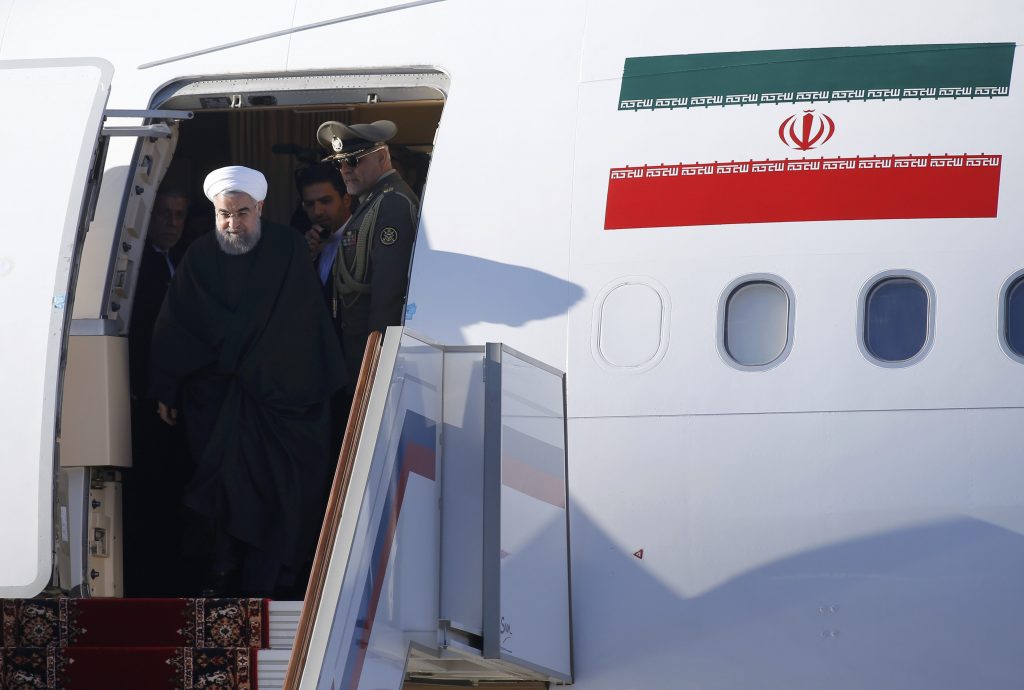 The announcement that a prominent conservative cleric will run for Iran’s presidency next month has transformed the race, potentially unifying opponents to President Hassan Rouhani in a strong challenge to his re-election.

Ebrahim Raisi declared his candidacy on Thursday, according to Tasnim news agency, a day after two other conservatives, former president Mahmoud Ahmadinejad and Tehran Mayor Mohammad Baqer Qalibaf, bowed out. The emergence of a single strong opponent could not only narrow Rouhani’s chance of winning on May 19, but also position Raisi as the front-runner to succeed 77-year-old Ali Khamenei as Supreme Leader, when he dies.

“This is going to be a very serious race with huge consequences for the Iranian electorate,” Sanam Vakil, an associate fellow at Chatham House, said by phone. “The stakes are very high.”

The decision to run represents both opportunities and risks for Raisi and his conservative backers. Beyond the powers of the presidency, victory would increase his chances of succeeding Khamenei, who himself served two terms as president under Ayatollah Ruhollah Khomeini, the leader of Iran’s 1979 Islamic revolution. Failure could take the momentum out of his career and ruin his chance to win Iran’s top role.

“The regime wouldn’t allow someone like Raisi to run without wanting him to win,” said Vakil. “To risk his credentials on the presidency only makes sense if he is going to survive the electoral process, with reputation and credibility intact.”

Khamenei last year appointed Raisi, 56, to manage the Astan Quds Razavi, an Islamic charity that controls assets worth billions of dollars as well as the country’s holiest shrine in the northeastern city of Mashhad. The appointment signaled Khamenei’s confidence in the younger cleric and triggered speculation that he was being groomed as a contender to succeed him to Iran’s most powerful post. But while Raisi has had a number of important judicial and religious roles, he lacks political experience.

In 2016, Raisi became embroiled in controversy after the release of a 1988 tape in which Iran’s then Deputy Supreme Leader Hossein Ali Montazeri could be heard berating a committee responsible for the summary executions of thousands of political prisoners, mostly supporters of an organization that had taken up arms against the regime.

Raisi, at the time a public prosecutor, was among those Montazeri accused on the tape of committing “the biggest crime in the history of the Islamic Republic.” It was Montazeri, however, who subsequently lost his position.

As president, Rouhani has worked to normalize the Islamic Republic’s relations with the West and open Iran to international trade and investment. If he loses power, the conservative establishment could push Iran back into open hostility toward the U.S. and its allies, scaring off investors and raising the risk of additional U.S. sanctions or even a military confrontation.

In particular, Rouhani’s government has been struggling to persuade major Western oil companies such as Total of France, Italy’s Eni, BP of the U.K. to invest in Iranian oil fields. One hurdle has been the poor terms of the contracts under which foreign oil companies traditionally have operated in Iran. The government has produced a new contract that’s more attractive for investors, but against intense opposition from conservatives. Those terms could again be revised.

Rouhani championed Iran’s 2015 nuclear deal with world powers, under which the Islamic Republic agreed to substantially reduce its nuclear fuel program in exchange for the lifting of punitive economic sanctions. It is not clear that a conservative victory would lead to Iran backing out of the deal, which had Khamenei’s approval.

Rouhani won the presidency in a first-round landslide in 2013, aided by a divided field of five conservative opponents. Until Thursday, a repeat had looked likely. The “principlists,” as Iran’s conservatives call themselves, again looked to be struggling to produce a credible candidate around whom to unite.

Tehran Mayor Qalibaf was Rouhani’s closest rival in 2013, and until his withdrawal on Wednesday had been expected to run again. His record was damaged by a corruption investigation last year, as well as by protests over safety failures that may have caused a tower in Tehran to collapse after catching fire in January, killing 20 firefighters.

It isn’t yet clear whether remaining conservative hopefuls will vacate the field for Raisi, and Rouhani remains a strong candidate. Were he to lose, he’d be the first president in the history of the republic to serve just one term.

Economists generally say Rouhani has done an impressive job by bringing down inflation to single digits from a peak of 30 percent, while lifting the economy out of recession. And the nuclear deal has allowed Iran to increase oil production to 3.8 million barrels a day, from a low of 2.5 million in 2013.

Little of the rebound in oil production has filtered down to ordinary Iranians, and the pace of increase has begun to level off. The International Monetary Fund forecasts that Iran’s economy will grow by 3.5 percent in 2018, down from 6.6 percent over the last 12 months.

A January poll by the University of Maryland found that, for the first time since 2014, a majority of Iranians think the economy is getting worse. Seventy-three percent said the nuclear deal hadn’t improved their living conditions. Support for the president dropped below 50 percent.