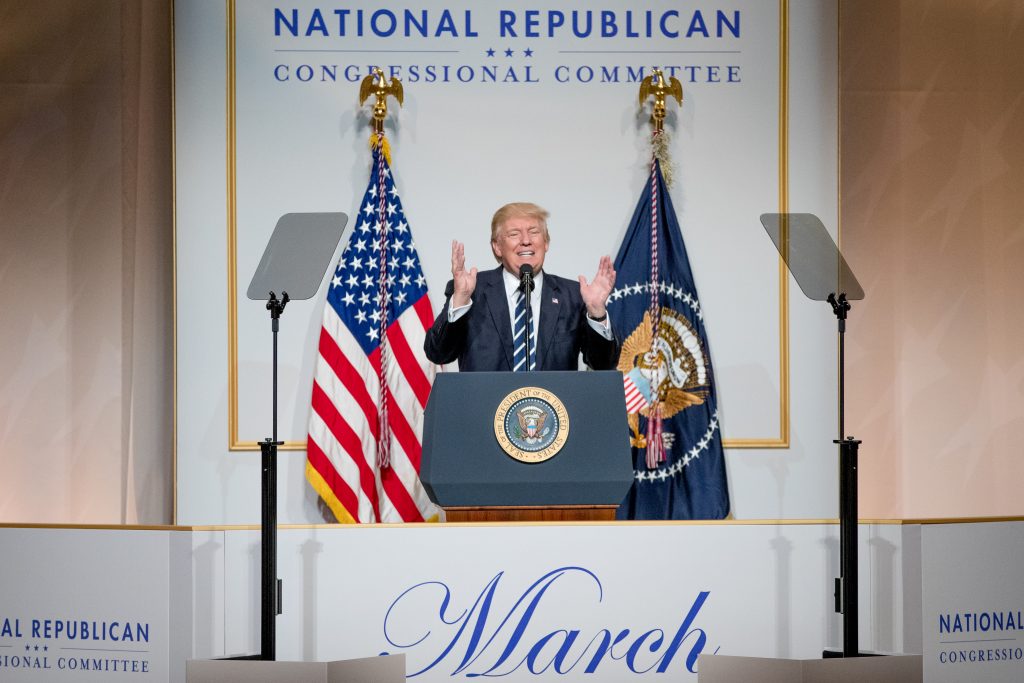 The House Republicans’ political arm raised a record-breaking $15.5 million in March, a haul collected with the help of Donald Trump as the new president tries to protect his majority in Congress.

The National Republican Congressional Committee raised nearly $36 million in the year’s first three months, officials there said on Thursday, almost double what the committee raised during the same time frame two years ago.

In an interview, NRCC Chairman Steve Stivers credited Trump in part for boosting the organization’s fundraising.

“He was our speaker at the March dinner; it was a record event,” he told McClatchy in an interview at the NRCC office on Capitol Hill, referencing a major fundraising event at which Mr. Trump appeared last month. “We raised $30 million through the course of that fundraiser through three months. It helped. It helped a lot. He was part of our success.”

He said the organization had raised more online in the first quarter of 2017 than it did through digital advertising in the entire year of 2015. Even during the height of the health care debacle, in which House Republicans couldn’t reach an agreement with each other on efforts to repeal and replace the Affordable Care Act and ultimately didn’t even vote on their health care bill, donations flowed in steadily.

“Even at the end of March … we kind of fumbled the football a little bit, but our online folks never ceded their enthusiasm,” he said.

Defending incumbents is a prong of the three-part strategy Stivers laid out for approaching the midterm elections, a plan that also includes raising “a ton of money, which we’re on track to do,” and expanding the Republican map, including into House districts held by Democrats that also supported Mr. Trump last November. The committee is targeting 36 congressional districts for now.

But first, the organization is watching — and mobilizing for — a surprisingly competitive special election in a Georgia congressional district long held by Republican Tom Price, who is now President Trump’s secretary of health and human services.

There, Democratic candidate Jon Ossoff has unexpectedly performed well in polls ahead of the April 18 election, forcing the NRCC to respond with TV ads aimed at turning out Republican voters.

Stivers didn’t rule out an Ossoff victory, noting the unpredictable nature of a special election.

“I feel like that’s probably going to be okay, but there’s no guarantees in this life,” Stivers said. “And if he can goose turnout just enough… I mean, we won the (Democratic former New York Congressman) Anthony Weiner seat, like, who thought that could happen? And it was a special election.”

An Ossoff win in the traditionally Republican seat — Democrats haven’t won it since the 1970s — would be a political earthquake, akin to Republican Sen. Scott Brown’s 2010 victory in Massachusetts, which nearly prevented passage of the Democrats’ health care bill, the Affordable Care Act.

Stivers said that if the GOP could survive this month’s election — the race goes to a two-candidate runoff in June if no one reaches 50 percent of the vote in April — the party will have an easier time defeating Ossoff because it can unite behind one Republican instead of splitting its support among the 18 people currently running.

Stivers, who is tasked with defending Republican seats, said the GOP could have used some “better salesmanship” on its ill-fated health care bill, which polls found was deeply unpopular.

But he declined to say it would have been a political loser for the party had it passed, saying it was hard to game out a hypothetical.

He did say he could see the GOP trying to push health care once again in the fall, when another round of Obamacare premium increases could be announced.

He also pledged that — a strong initial fundraising report aside — the committee would remain focused on aggressively raising cash through the midterms.

“So far we’ve been doing okay at fundraising, but the great thing about fundraising is, you can measure it every month and you know exactly how well you’re doing. So far I feel good, but I’ve got to deliver,” he said, calling the money effort a “23-month operation.” “Through Nov. 6, 2018, we’re going to be very focused.”