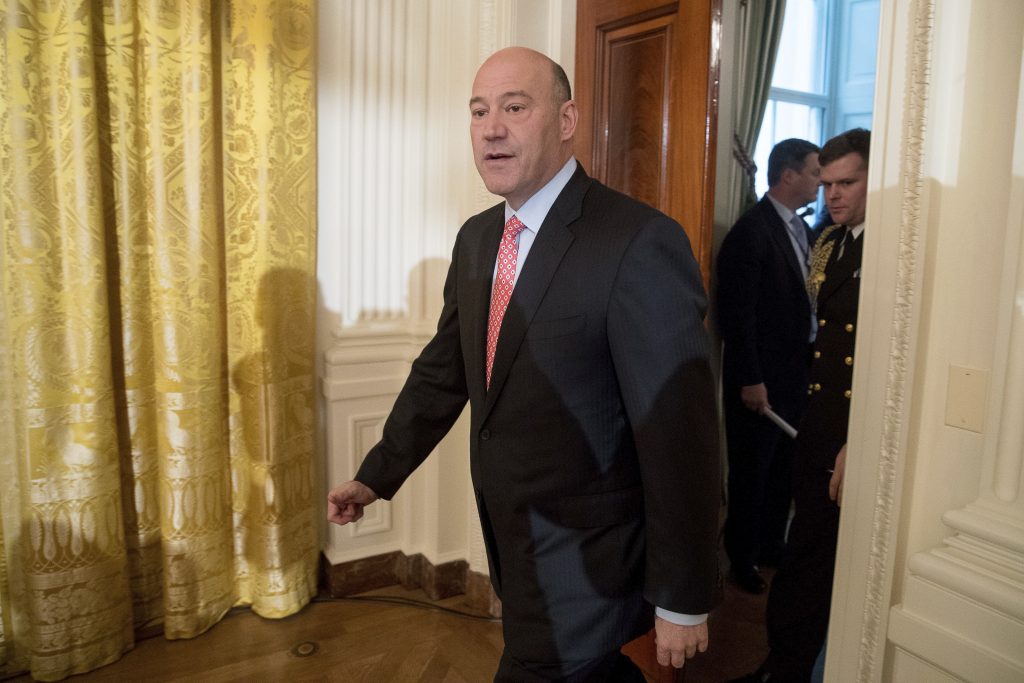 In a private meeting with lawmakers, White House economic adviser Gary Cohn said he supports a policy that could radically reshape Wall Street’s biggest firms by separating their consumer-lending businesses from their investment banks, said people with direct knowledge of the matter.

Cohn, the ex-Goldman Sachs executive who is now advising President Donald Trump, said he generally favors banking going back to how it was when firms like Goldman focused on trading and underwriting securities, and companies such as Citigroup primarily issued loans, according to the people, who heard his comments.

The remarks surprised some senators and congressional aides who attended the Wednesday meeting, as they didn’t expect a former top Wall Street executive to speak favorably of proposals that would force banks to dramatically rethink how they do business.

Yet Cohn’s comments echo what Trump and Republican lawmakers have previously said about wanting to bring back some version of the Glass-Steagall Act, the Depression-era law that kept bricks-and-mortar lending separate from investment banking for more than six decades.

Cohn was reiterating the Trump administration’s view that the banking system should be simplified with a focus on helping business grow and create jobs, a White House official said.

In the years after Glass-Steagall’s 1999 repeal, banks such as Citigroup, Bank of America Corp. and JPMorgan Chase & Co. gobbled up rivals and pushed into all sorts of new businesses, becoming one-stop-shopping financial behemoths.

Many banking executives believed that the inclusion of former finance executives like Cohn in Trump’s White House would temper major changes such as a Glass-Steagall return. But his Wednesday remarks suggest he could be a wild card should Congress get serious about reinstating the law.

A split of investment and commercial banking would have a disparate impact on Wall Street, as firms with substantial consumer lending operations would probably be hit the hardest by any changes, Brian Gardner, an analyst at Keefe, Bruyette and Woods, said in a research note. Goldman has a limited footprint in consumer lending, while it’s a big part of JPMorgan’s business.

White House officials haven’t said what an updated version of Glass-Steagall might look like. Getting Congress to pass any significant financial regulation legislation would be difficult, as lawmakers are currently bogged down by other issues including health care and taxes.

“We fully expect Glass-Steagall headlines to persist, but we see neither the political will nor the legislative capacity necessary for passage of legislation reshaping the nation’s banking framework,” said Isaac Boltansky, a financial regulation analyst at Compass Point Research & Trading.

Cohn’s remarks were prompted by a question about his views on Glass-Steagall from Sen. Elizabeth Warren, one of the finance industry’s most relentless critics, said the people who asked not to be named because Cohn’s meeting with Senate Banking Committee members was private. After Cohn answered, Sen. Robert Corker, a Tennessee Republican, pressed him to clarify his views.

Spokesmen for Warren and Corker didn’t respond to requests for comment.

Dismantling the nation’s banking giants isn’t a partisan issue, which is one reason why Wall Street fears the idea could gain traction. Both political parties — and many voters — still resent that taxpayers had to rescue the industry with a $700 billion bailout during the crisis.

Republicans included a return of Glass-Steagall in the party platform they approved in July during their national convention. Warren, a Massachusetts Democrat, has proposed legislation with Republican Sen. John McCain of Arizona called the “21st Century Glass-Steagall Act.”

Advocates for bringing the law back say smaller banks could be allowed to fail without threatening the economy or needing bailouts. They also argue that a less powerful finance industry wouldn’t have as much influence over Washington policy. Wall Street executives counter that it would be impossible for broken-up lenders to compete with overseas mega-banks and that the 2010 Dodd-Frank Act has made the industry much safer.

“There is broad agreement, including among all our bank regulatory agencies, that Glass-Steagall would not have prevented the crisis or the housing market collapse,” Rob Nichols, president of the American Bankers Association, said in an emailed statement. “America’s economy depends on banks of all sizes to meet the needs of a large and diverse group of clients, customers and communities.”

Wednesday’s Capitol Hill meeting with Cohn was arranged by Senate Banking Committee Chairman Mike Crapo of Idaho, and included lawmakers from both political parties and their staffs. The discussion covered a wide range of topics, including financial regulations and overhauling the tax code, the people said.