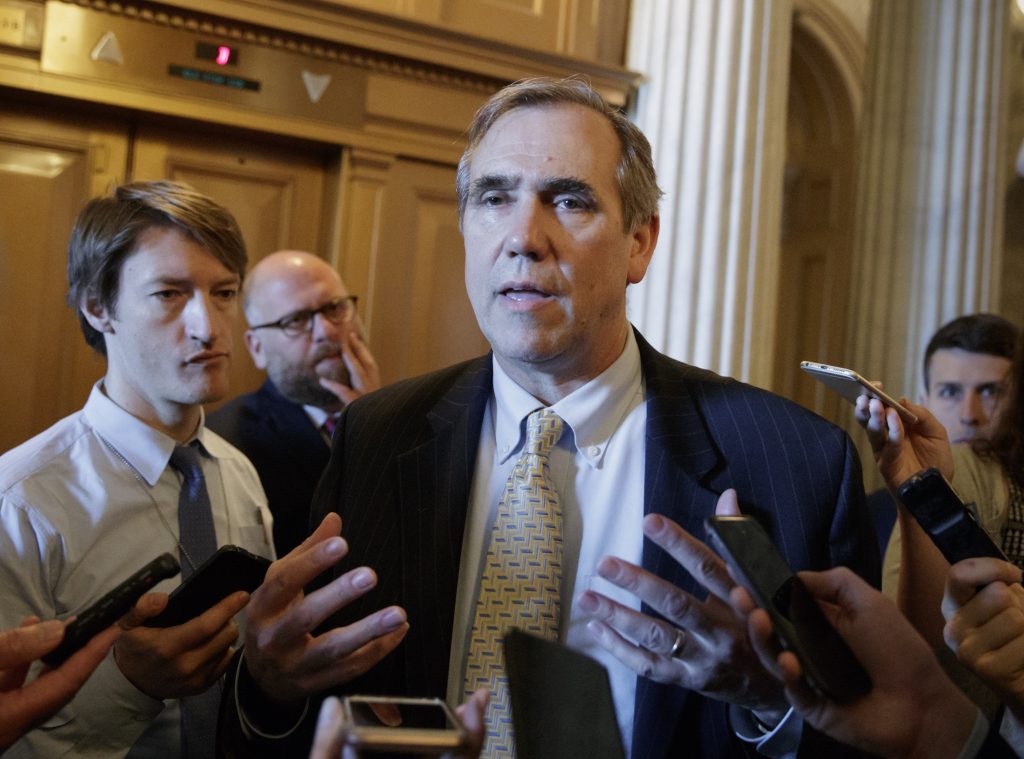 The heated battle over President Donald Trump’s Supreme Court nominee moved front and center Wednesday in the Senate, where one Democrat concluded a marathon speech against Judge Neil Gorsuch and other senators praised or criticized him.

Sen. Jeff Merkley, D-Ore., spoke against Mr. Gorsuch for about 15 hours Tuesday night and Wednesday morning, taking aim at both the judge and Mr. Trump. He also lambasted Republicans for not moving ahead with President Barack Obama’s nomination of Merrick Garland to the court last year.

“To proceed to fill this stolen seat will damage the court for decades to come,” he said Wednesday.

Republicans defended Gorsuch and accused Democrats of caving to pressure from their party’s liberal base.

“Democrats are bowing to hard left special interests that can’t get over the results of the election and thus are demanding complete Democratic opposition to everything this president touches,” said Senate Majority Leader Mitch McConnell, R-Ky.

The competing speeches came as the Senate moved closer to tense votes that will begin Thursday and is expected to conclude Friday with a major change to Senate rules that will result in Gorsuch’s confirmation.

Democrats have enough votes to block Gorsuch’s nomination from proceeding to a final vote. Just four of them have vowed they will side with Republicans to support an up-or-down vote.

The Democratic obstruction is expected to prompt GOP leaders to use what is known on Capitol Hill as the nuclear option: eliminating a 60-vote requirement for Supreme Court nominees and thereby allowing Gorsuch to be confirmed by a simple majority. Senate Republicans hold a 52-48 advantage over the Democratic caucus.

It also heralds a potentially more contentious climate in the Senate, which traditionally has allowed the minority party to exert a powerful voice in debate over key nominations and legislation – unlike in the House.

Senate Democrats changed the rules in 2013 to permit executive-branch nominees including federal judges to be approved by a simple majority, with the critical exception of Supreme Court selections.

But doing away with the 60-vote barrier would eliminate the minority party’s historic influence over who the president nominates to the high court and significantly decrease its ability to help exercise a check on the executive branch.

Sen. Merkley’s speech had no impact on the Senate schedule. But it highlighted the intensity of the Democratic opposition to Mr. Trump and Gorsuch.

At 10:15 a.m., Merkley wrapped up, left the floor, and got coffee and bagels for the Senate staffers who stayed up working as he was speaking. Turning to a group of reporters, he reiterated his hope that Republicans and Democrats could cut a deal, such as waiting until another seat opened on the court, so that Gorsuch could be nominated alongside Merrick Garland.

“I hope that somehow, the message will reach a few hearts across the aisle, that we’re on a path that we have not yet completed,” said Merkley. “The seat has not yet been stolen.”

Asked if he regretted his 2013 advocacy to limit the filibuster for offices lower than the Supreme Court, Merkley stood his ground. Presidents, he said, deserved to pick their staff. And Democrats had spent months trying to find a way around the “nuclear option,” until deciding that Republicans were never going to budge.

“We labored for the better part of a year, working with our Republican colleagues. It wasn’t like what’s going on now,” he said. He snapped his fingers. “Just like that.”

McConnell has said that while he is prepared to deploy the nuclear option to overcome Democratic resistance to Gorsuch, he vowed not to end the 60-vote threshold on legislation while he is majority leader, maintaining what is known in the Senate as the filibuster as it pertains to making laws.

“There’s no sentiment to change the legislative filibuster,” he said Tuesday.

Democrats and Republicans have delivered sharply contrasting speeches on Gorsuch this week. Democrats have repeatedly brought up Garland and portrayed Gorsuch as beholden to wealthy corporate interests as opposed to average Americans. They have also expressed concern about confirming Mr. Trump’s nominee at a time when ties between his team and Russia have come under heavy scrutiny.

Republicans have portrayed Gorsuch as a more-than-qualified and mainstream judge with sterling career credentials. They have argued Democrats would block anyone Mr. Trump puts up.

Sen. Mike Rounds, R-S.D., called Gorsuch “one of the finest judges our nation has to offer,” and said he would uphold “justice, fairness and an interpretation of what the law is.”

Democratic Sens. Joe Donnelly, Ind., Heidi Heitkamp, N.D., and Joe Manchin III , W.Va. – all of whom are up for reelection in states won by Mr. Trump – say they plan to support Gorsuch. Sen. Michael F. Bennet, D-Colo., who represents Gorsuch’s home state, says he won’t support the filibuster but has yet to signal whether he would vote to confirm Gorsuch on the floor.

The four were the only Democrats who joined with Republicans in a 55-to-44 vote to move ahead with debate on Gorsuch’s nomination Tuesday.

For weeks, Republicans have warned that they will not hesitate to change the chamber’s rules to confirm the 49-year-old federal appeals court judge if Democrats block him. A rules change will require majority support.

Asked Tuesday if he is confident he has the votes to make that change, McConnell replied simply: “Yes.”