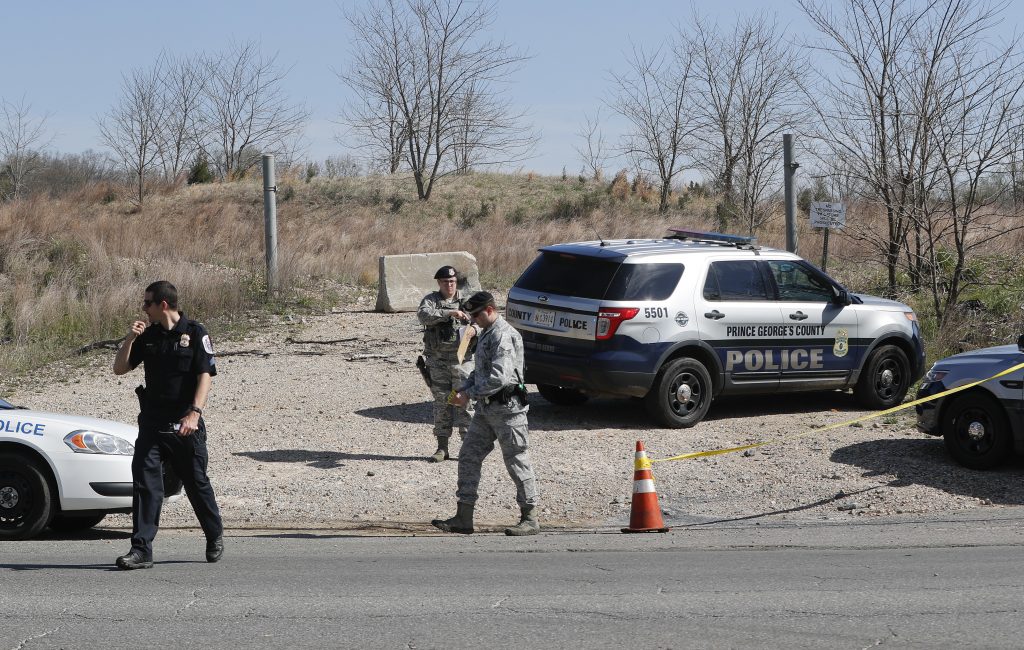 A fighter jet pilot on a training mission ejected safely before the aircraft crashed Wednesday in a wooded area in a Washington suburb. Witnesses reported the sound of live ammunition.

The D.C. Air National Guard F-16C went down about 200 yards behind a small subdivision of two-story brick homes in the middle-class suburban community of Clinton, about six miles (ten kilometers) southwest of Joint Base Andrews. It wasn’t immediately clear whether the plane was carrying live rounds. The military planned a news conference Wednesday afternoon.

About 20 homes in the area were evacuated as a precaution because of the possibility that the crash released hazardous materials, Prince George’s County Fire and EMS spokesman Mark Brady said. Area residents were later allowed to return home.

No one on the ground was injured and the pilot was taken to a hospital in a military helicopter and was treated for minor injuries, he said.

Crystal Hollingsworth lives nearby and said she heard a “huge crash” followed by the sound of “live rounds.”

“You knew something tragic was going on,” she said, adding that she thought it might be a terrorist attack.

Her husband, Tony Hollingsworth, said the “house shook” and he also heard the sound of gunshots in the woods, something that “sounded like a shootout.” He said it lasted for “ten to 15 minutes.”

He said he saw a big fireball in the woods and the pilot’s red and white parachute.

Crystal Hollingsworth said pieces of the plane fell in her neighbor’s yard, damaging some of the home’s siding. She said there were probably more than a dozen metal fragments, maybe about half an inch thick.

Pieces from the crash ranged in size, some about the size of a remote or a book. She said one was marked “confidential.” Some of the debris was still burning when she saw it, she said.

Tyrone Wolridge and his wife said it felt like an earthquake and they saw a plume of smoke.

“We could feel it. The house shook so bad. Then we heard a boom,” he said.

Acting fire chief Ben Barksdale said pieces of the plane were on fire when crews arrived and firefighters used water and foam to extinguish them. The fuselage of the plane and one wing were intact at the crash scene. The wreckage was spread around a radius of roughly 40 yards, but debris was also found in other areas, a possible sign that it came off before impact, Mr. Brady said.

“Very fortunate that we didn’t have any lives lost today,” Mr. Barksdale said.

Brady said he tweeted pictures from the crash scene from his official account but then was asked by military police on the scene to delete those images. The military did not explain why it did not want the images to be published, he said. He deleted the images about 20 minutes after posting them.

“I simply was complying with the request from the military,” he said.