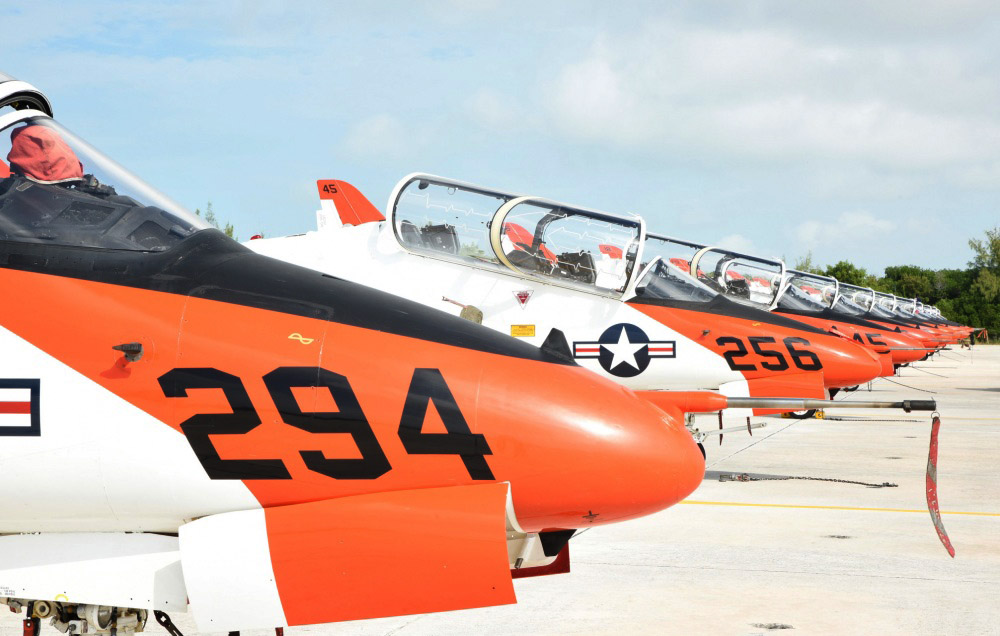 The Navy Department has grounded its entire fleet of T-45 trainer jets after instructor pilots raised concerns about the ability of aviators to breathe in them while flying, military officials said, expanding the scope of safety concerns about U.S. military aircraft.

Senior Navy officials made the decision amid problems with “physiological episodes,” said Cmdr. Jeanette Groeneveld, a Navy spokeswoman. The term defines incidents in which the amount of oxygen a pilot breathes is reduced or contaminated or a cockpit is depressurized, causing lightheadedness and, in the worst cases, blackouts.

Rear Adm. Dell Bull, the chief of naval air training, will keep all 197 of the single-engine, black-and-orange aircraft grounded as engineering experts meet in person with pilots at training wings in Kingsville, Texas; Meridian, Miss.; and Pensacola, Fla., Groeneveld said. The meetings began Monday in Kingsville and will be carried out in Mississippi and Florida on Tuesday.

“We take the concerns of our air crew seriously and have directed a two-day safety pause for the T-45 community to allow time for naval aviation leadership to engage with the pilots, hear their concerns and discuss the risk mitigations, as well as the efforts that are ongoing to correct this issue,” Groeneveld said.

The grounding could be extended longer than two days, depending on what is discovered, she said. The issue has primarily been caused by contamination in breathing systems.

“There has not been a smoking gun,” she said of the cause. “There is nothing that has said, ‘This is it,’ and we can fix it and move on.”

Fox News reported Monday night that more than 100 Navy pilots were boycotting flying the T-45 until the issue is resolved. One of the pilots potentially affected is Marine 1st Lt. Michael Pence, the son of Vice President Pence, the report said. He is a flight student at Naval Air Station Meridian in Mississippi.

The grounding of the T-45s comes a week after senior U.S. military officials told the House Armed Services Committee’s subcommittee on tactical air and land forces that the F/A-18 Hornet, F/A-18 Super Hornet, EA-18 Growler and T-45 all have seen a sharp spike in physiological episodes since 2010, when the Navy Department began tracking the issue.

A Navy officer, speaking on the condition of anonymity because of the sensitivity of the situation, said the problem in the T-45 is likely even worse recently. He characterized the decision of flight instructors to not fly as “not so much a strike,” but instead “instructors invoking their responsibility to not fly when there is significant enough risk to the aircraft and personnel.”

Navy instructors decided not to fly Monday, while Marine Corps pilots continued to fly, the officer said. The admiral’s decision to ground the entire T-45 fleet affects all of them, he added.