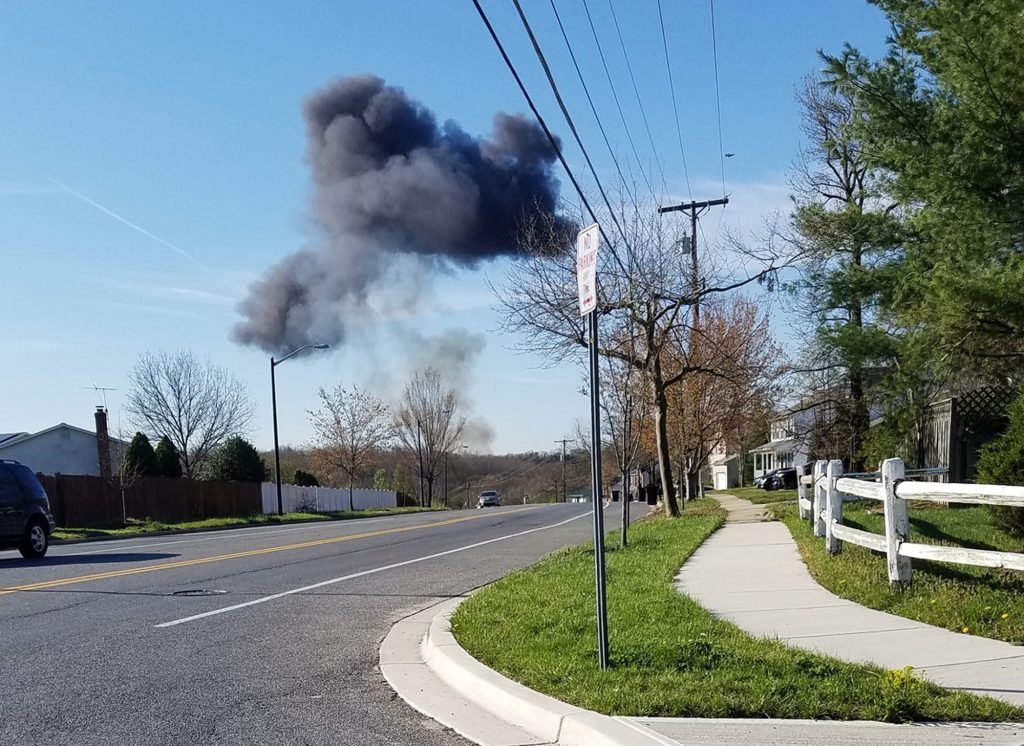 A fighter pilot on a training mission ditched his jet in a wooded area Wednesday so that the plane would avoid crashing into a suburban Washington neighborhood, the military said.

The F-16C, which military officials said was at least 30 years old and worth $20 million, went down about 200 yards behind a small subdivision of two-story brick homes in the middle-class suburban community of Clinton, about 3 miles southwest of Joint Base Andrews.

The pilot was treated for minor injuries and released from the hospital, said Lt. Col. Michael Corker, the pilot’s commanding officer. No one else was injured.

The pilot, whose name was not released, is with the District of Columbia Air National Guard and was flying one of four fighter jets from Maryland to a shooting range in Pennsylvania for a training exercise when the crash happened.

Some residents in the area told reporters that t President Trump’s Handling of Syria Has Some Senate Republicans Very Concerned hey heard what sounded like gunfire after the crash.

Military officials said the plane was armed with “training rounds,” which are real bullets that lack the armor-piercing and explosive capabilities of rounds used in combat. Officials said the crash and subsequent fire might have caused some of those rounds to go off.

“Some of the loud noises may have been those rounds,” said Lt. Col. Lisa Mabbutt, the base’s acting director of emergency management.

The cause of the crash is being investigated. The pilot tried to turn back toward the base after encountering trouble “but wasn’t able to make it in time” and decided to jettison the fighter’s extra fuel tanks before ejecting when he was about half a mile off the ground, Corker said.

About 20 homes in the area of the crash were evacuated as a precaution, local fire officials said. Residents were later allowed to return home.

Reginald Stewart, 56, said he was away from his home when the crash happened but multiple neighbors called to tell him that a plane had crashed and that debris had hit his house. He said debris hit his home and his air conditioning unit and that the sprinkler system in one room had gone off, causing damage.

“Planes fly over our homes all the time,” Stewart told The Associated Press by telephone. “You never think the day’s going to come that it’s really going to crash into your house, into your backyard.”

Crystal Hollingsworth, who lives near the crash site and had to evacuate, said she heard a “huge crash” followed by the sound of “live rounds.” Her husband, Tony Hollingsworth, said the “house shook” and he also heard the sound of gunshots in the woods, something that “sounded like a shootout.”

Crystal Hollingsworth said pieces of the plane fell in her neighbor’s yard, damaging some of the home’s siding. She said there were probably more than a dozen metal fragments, maybe about half an inch thick. Some of the debris was still burning when she saw it.

Acting Prince George’s County Fire Chief Ben Barksdale said pieces of the plane were burning when crews arrived and firefighters used water and foam to extinguish them. The fuselage of the plane and one wing were intact at the crash scene.

Mark Brady, a fire-department spokesman, said he tweeted pictures from the crash scene from his official account but then was asked by military police on the scene to delete those images. The military did not explain why it did not want the images to be published, he said. He deleted the images about 20 minutes after posting them.