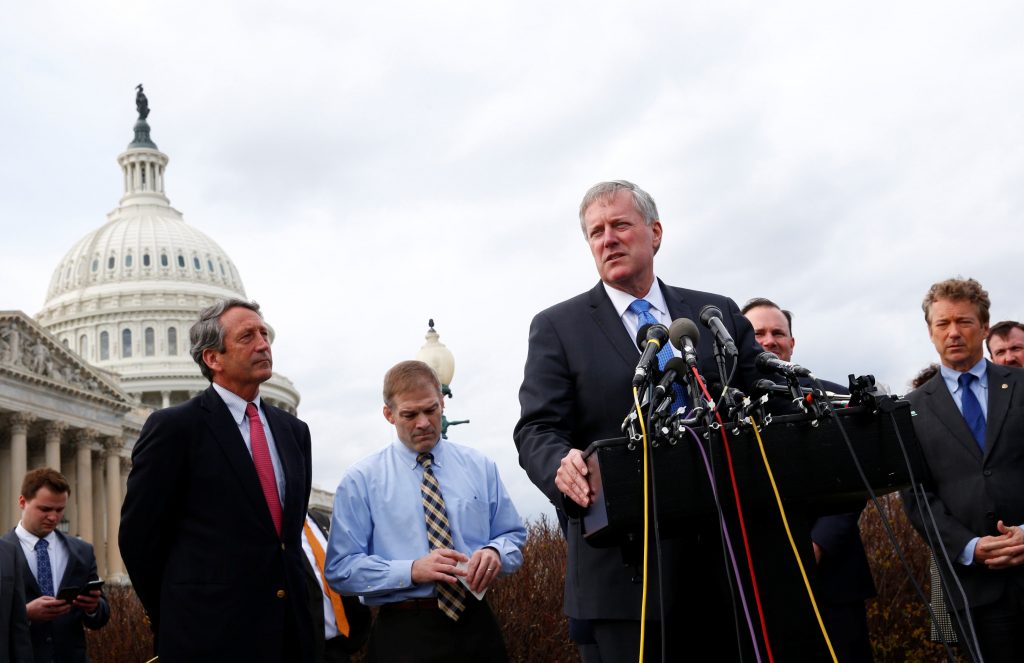 House lawmakers hope Tuesday to release a new Trump administration-backed version of the health-care bill they had to abandon last month in an embarrassing setback to their pledge to repeal Obamacare.

But GOP leaders sought to downplay expectations for a quick vote.

“We’re at that conceptual stage right now,” House Speaker Paul Ryan told reporters Tuesday morning. “We don’t have bill text or an agreement yet.” GOP leaders barely mentioned health care in the private conference meeting Tuesday morning and offered few details of the plan being devised by the White House.

Rep. Mark Walker, chairman of the conservative Republican Study Committee, said Tuesday that the Energy and Commerce Committee is “putting it together and language should be ready this evening.”

Late Monday, Vice President Mike Pence and White House chief of staff Reince Priebus met with House conservatives to lay out the details of the plan. One lawmaker said it could allow states to charge higher rates to sick people. President Donald Trump’s budget director, Mick Mulvaney, was also in the meeting.

“The president would like to see this done,” White House spokesman Sean Spicer said Tuesday. He said he wasn’t seeking to raise expectations about a possible deal but added, “We feel very optimistic about the tone” of the discussions.

Several lawmakers, including a close ally of Mr. Trump’s, said they think a vote could still occur this week, though Mr. Ryan said he didn’t know whether that would happen.

“The administration is saying it would like it this week,” Republican Rep. Chris Collins of New York said Tuesday morning. Mr. Collins and several Republican moderates went to the White House Monday to discuss the plan.

Republicans have little space on the calendar to hold a new vote this month. They are scheduled to begin a two-week recess on Friday, and when they return they will have five days to pass a spending measure to keep the government funded after April 28.

“We’re hopeful that we’ll get the legislative text within the next 24 hours,” said North Carolina’s Mr. Meadows. “There’s no deal in principle.”

The White House and Republicans are discussing a plan that would allow states to apply for waivers on some of Obamacare’s requirements, while still preserving its ban on excluding coverage of those with pre-existing conditions. States would have to show that their waiver “would improve coverage and reduce costs,” Collins said.

Rep. Phil Roe, a Tennessee Republican on the GOP vote-counting team, said “there’s no question” that the bill’s prospects would be helped by allowing states to opt out of providing essential health benefits as defined by Obamacare. But he said some Republicans raised fears that it would make it harder to allow insurers to sell across state lines.

Democratic National Committee Chairman Tom Perez on Tuesday called the Republican leadership “heartless” in how they are dealing with a law that extended health care to 24 million people.

Republican Kevin Cramer of North Dakota sounded a note of skepticism about the new push for a health measure, saying it was an “honest effort” but that there was very little “wiggle room” to make changes that may gain support.

“I see very little room to tilt the bill one way or another to attract votes without losing an equal number,” Mr. Cramer said.

Two members of the Freedom Caucus – Raul Labrador of Idaho and Scott DesJarlais of Tennessee – wouldn’t say whether they believed the proposed changes would help win their support.

“It takes a little time to go through it,” Mr. DesJarlais said. “We want to know what’s in it before we pass it.”

Meadows said one element eligible for waivers would be Obamacare’s community rating system, which prevents insurers from varying premiums within a geographic area based on age, gender, health status or other factors. Such a change would allow insurers to charge sick people more for coverage.

The plan would rely on risk-sharing pools to be the “backstop” for people with pre-existing conditions who could be subject to higher premiums if the requirement on community rating were to be removed, Meadows said. “Marginally sick people” would pay the “risk cost associated with their coverage.”

“Those that have premiums that would be driven up because of catastrophic illness or long-term illnesses, we’ve been dealing with that for a long time with high-risk pools, so we believe … doing that is a way to keep premiums down for everybody, to ensure everybody’s covered and ultimately … you don’t get priced out of the market,” he added.

Collins said he wouldn’t back a community rating opt-out for states. “I think it might hurt the vote count,” he said.

When asked if the changes Mr. Pence offered would lose moderate votes, Meadows said it was his understanding that the administration had met with moderate members and was working to shore up support in the center.

Meadows said he instructed his members to be ready to examine the legislative text as soon as it’s available. He said he didn’t necessarily expect that new estimates on the plan’s cost or coverage projections would be available from the Congressional Budget Office before a vote.

Within the Freedom Caucus, “all the noes expressed a willingness to look at this,” he said. Meadows said he doesn’t expect the caucus to take an official position supporting or opposing the revised bill, but he would offer a detailed vote count of its members after the text is made available.