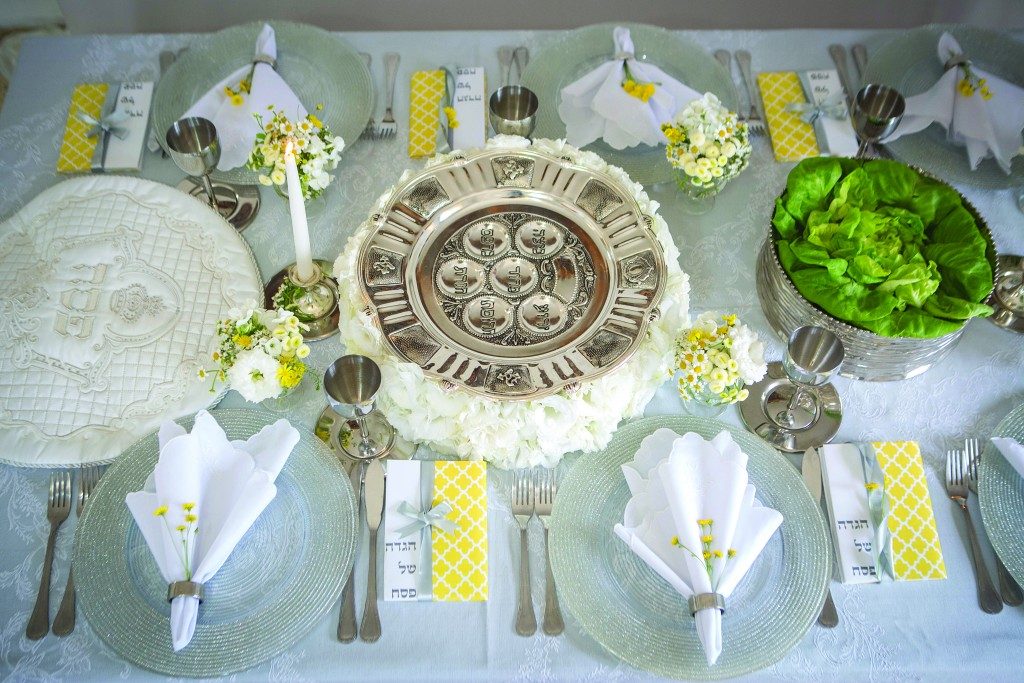 Pesach night is very special night. Parents enjoy their role of v’higadeta levincha and children take pride in being the one who does ki yishalcha bincha. What a beautiful table setting; the father, in the leader’s position, and the son, so very interested in following his father’s guidance, step by step. How do we create such a magical moment?

In a way, we can say it’s the atmosphere. Grandparents, parents, children and grandchildren get together for the Seder. This is where the family legacy is passed on from generation to generation. Who are we? Where do we come from, as well as where are we heading? The moment is serious yet the participants are festive and everyone is paying attention. It’s not an event that families schedule as an annual get-together. It is a momentous occasion that is permanently scheduled on Pesach night. The entire family anxiously awaits to hear the grandfather, father or head of the Seder officiate and relay the message of emunah in Hakadosh Baruch Hu to the family.

Chazal instituted shoalin v’dorshin 30 days before Pesach. In yeshivah, Rebbeim immerse themselves in the hilchos Pesach and the Haggadah. Chazal made special halachos in preparation for this special Yom Tov. They tell us to refrain from eating matzah on Erev Pesach. People have minhagim not to eat matzah from Rosh Chodesh Nisan on. Shulchan Aruch adds rules pertaining to not drinking wine or eating maror on Erev Pesach and not to eat full meals Erev Pesach late in the afternoon. Refraining from eating matzah and maror Erev Pesach helps us do the mitzvos of achilas matzah umaror with more appetite. In addition, we begin saying part of the Haggadah on Shabbos Hagadol, before Pesach.

The Gemara tells us: It is a mitzvah to give the children nuts or goodies to encourage them to speak. A father who has a child who would not ask on his own is instructed to teach him to ask. After all, the father, inspired by the preparations, charged with this mission, filled with enthusiasm, calls out loud Kaddeish! The kinderlach explain that Tatty will rush to make Kiddush immediately, so that the little children shouldn’t fall asleep before asking the Mah Nishtanah. Kinderlach stand proud to ask the four questions, and everyone is directing their attention toward them.

Years later, these little children grow up and become blessed with children of their own. It is now their turn to continue the tradition. Their fathers — now grandfathers — are sitting at the head of their tables, transmitting the same emunah, with all the details of Yetzias Mitzrayim. With their own feelings of enthusiasm, they call out loud to their children Kaddeish! And the new youngsters at the table explain it in the same way as their Tatty did just a few years ago: “Tatty will make Kiddush immediately, so that the little children shouldn’t fall asleep before asking the Mah Nishtanah.” Yes, that enthusiasm continues on, generation after generation.

Since it’s done with a huge dose of uvacharta bachaim, the results are lemaan tichyeh atah v’zaracha, because children sense the difference. When they see the father’s enthusiasm they ultimately, be”H, choose the same life, with the same commitment.

We are, b”H, zocheh to see grandfathers pass on to fathers and to their children the appreciation for the Seder night, as well as the kiyum hamitzvos done with great hislahavus and the simchah shel mitzvah. This may be why we see the children continue to carry the torch, which is passed from generation to generation. The restrictions continue to be adhered to with conviction and the greatest respect, and the preparations are filled with the Pesach spirit.

Not only are the young children looking forward to the Seder, but also the grownups continue to lead their Seder in the same way that they saw their parents do it. Grandparents can shep nachas and thank Hashem for this tremendous accomplishment. The enthusiasm is contagious and continuous.

Children from a few years ago, today in the role of parents, feel fulfilled as they complete their Seder in the same way they saw their fathers and/or Rebbeim do. They, too, look forward to seeing their children continue with the family minhagim. It’s a night full of appreciation.

Can we make this happen more than once a year?

Such moments of spiritual connection between fathers and sons may be rare in many homes. Is it because it is not planned or because the father is unavailable or not equipped to share his wisdom on a regular basis? Or maybe it is the son who is not prepared to deal with his father’s responses during the rest of the year? Perhaps it is only on Pesach that both are so comfortable because the conversations surround a familiar topic. The conclusion is sort of agreed upon in advance, which allows everyone to be comfortable with the discussion or even with a debate.

Many parents would be willing to give whatever it takes for their sons to have the desire for give-and-take conversations with their father. They would love to have sons who respect their father and his opinions, and are sincerely interested to hear the wisdom and knowledge that he has to offer. Yet, generally, it continues to happen only once a year, on Pesach night. How come?

Perhaps by examining another one of the ingredients of the Pesach Seder, we can attempt to achieve this lucrative goal of the father continuing in the same role during the rest of the year.

The father comes to the Seder looking like a king. He assumes the role of commander-in-chief, feeling the responsibility to lead. The father sits at the head of the table offering his child warmth and patience, making his child feel welcome and rewarded every time he opens his mouth. The son warms up to his father’s embrace and feels encouraged to ask. The Pesach ambiance certainly contributes to the spirit of the Seder. Is this child ever made to feel so welcome during the year?

During the rest of the year, on weekdays, juggling just the basic responsibilities occupies every waking moment. Distractions such as cellphones, computer programs and electronic gadgets destroy every attempt at calm and pleasant exchange of ideas. It seems as if every family member comes home from a different planet six evenings a week. They have nothing in common to share with each other and very little interest in common conversation.

Even on Shabbos, when we rid ourselves of our weekday routines, we are very often not adequately prepared to engage our children in meaningful moments. Baruch Hashem we conduct beautiful Shabbos seudos, allowing for family time. We sing the routine zemiros with life and geshmak, filling the atmosphere with warmth and love. It feels great, but does it allow for the individual discussion between father and son? What do we do to cultivate that special feeling that gets the son to be as interested in his father as his father is interested in him?

The natural/positive way is the one we enjoy on Pesach night. The connection is solid and the natural spirit ignites a closeness that puts everyone into their natural setting. The father assumes the v’higadeta levincha role and the son fits right into the ki yishalcha bincha role.

The unnatural/negative way is the one that has parents worry about their children 24/7. Children get into a pattern, R”l, of behaving negatively, demanding constant attention. The wiring of the connection is so bad that it makes both the parent and the child feel totally disconnected and very uncomfortable.

We live in times when parents leading healthy lives with mainstream families are overly concerned about their child’s comfort. Often, they feel guilty and hesitate to impose rules or restrictions on their children because they fear resentment. This causes parents to sacrifice themselves and their values and to become increasingly tolerant of unacceptable behavior, and approving lifestyles lower than their family standards. They think that they are embracing their child by making him feel accepted and more comfortable. They hope that this will get their child to feel close to them and follow their guidance.

In the healthy family situation, this theory has proven to be far from the truth, and the results are being thrown in our face. A child naturally wants to be in a position where “his parent” leads, where the parent is the one who is making decisions based on the parent’s value system and the parent’s comfort level. The child is most comfortable following his parent’s requests.

When a child fights the parent’s authoritative stand in specific situations, it is not an indication of his not wanting to have a parent with authority. A child feels more secure when his parent is in control and would like it to remain that way. They just want a break this time due to certain pressures or needs. Why should parents abandon their families by disposing of their authoritative position? This is the natural position, most comfortable for both the parents and the child.

Pesach night’s real beauty can also be found in the natural setting. Hashem created the world where the father is in his respected role, the mother is in her respected role and each child is following in his special role. This is the natural setup and this was His intention, and that’s why it works so beautifully. Moving ourselves further away from Brias Haolam makes our setup less natural and makes everyone feel less comfortable.

B”H, many wise families have been on guard, keeping their homes intact and protected from adopting a more liberal standard. Creating such boundaries is not an easy task, as the seepage from the general world becomes more and more difficult to avoid.

Establishing our homes in the natural way year-round requires a lot of courage. Unfortunately, many have become accustomed to a warped way of thinking. Give, give in, spoil and then spoil some more to achieve a satisfied productive child. This has turned out to be a recipe for disaster. In many cases it contributed to raising entitled youth who don’t know how to tolerate, how to give and how to be satisfied with whatever Hashem sends our way. Getting a “no” from a parent has become a major rejection with threatening ramifications. Not feeling the top of the class or an elite member of the group, or chas v’shalom, not being accepted into the elitist camp or mesivta turns into a major catastrophe that may require therapy to heal. Children feel handicapped.

It’s time for a change!

Take the lead. Father and mother need to spend quality time together to reassure each other that they can institute more of the natural structure in their home. It is a slow and gradual process. It may require some guidance and reassurance from Gedolei Yisrael, along the way. But it is worth the effort, as it will, be”H, turn the home into a happy, satisfied, natural home. It will be filled with menuchah, emes, va’emunah, which allows for shalom v’shalvah, hashket uvetach — peace, harmony, serenity, and security. Do you know why? Because it will be yakiru v’yeidu ki me’itcha hi menuchasam — this is the way that You, Hakadosh Baruch Hu, intended it to be. V’al menuchasam yakdishu es shemecha.

We can make our children great again!