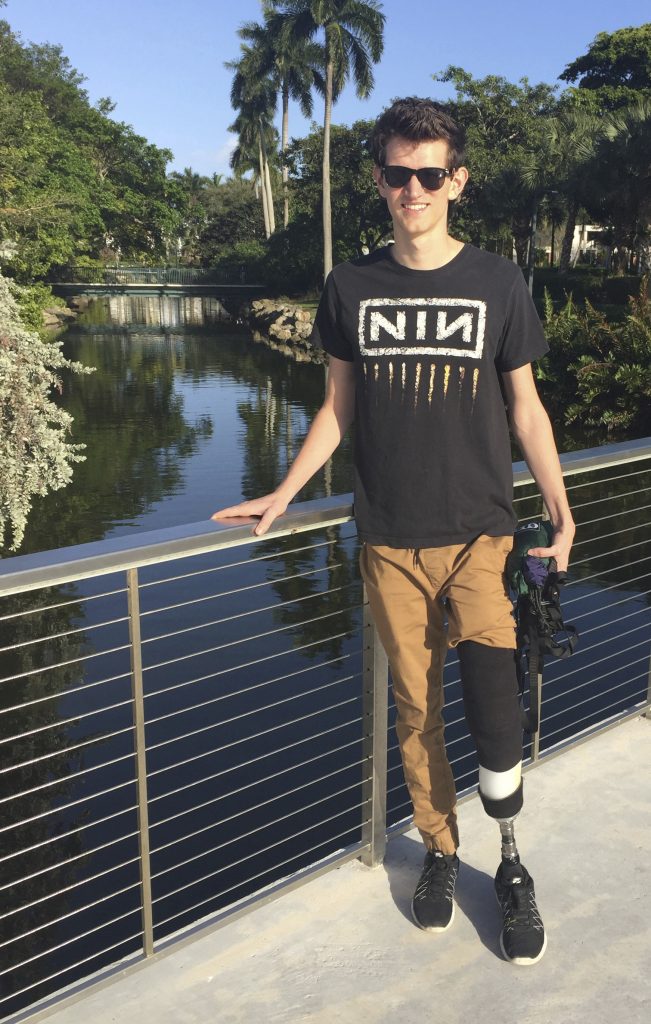 For nearly nine months, the investigators have tried to find out how exactly a small, clear plastic bag full of readily available, highly explosive chemicals found its way to Central Park on July Fourth weekend. The homemade concoction blew up when a park visitor stepped on it; the tourist from Virginia lost his left foot.

Arroyo, D’Antonio and other members of a team of New York police and federal Bureau of Alcohol, Tobacco, Firearms and Explosives agents have tracked down the origin of the bag, identified the chemicals in it and reviewed thousands of hours of video to see who might have brought it into one of the country’s most popular tourist destinations.

But so far, finding out who is responsible for the homemade concoction that injured 19-year-old Connor Golden remains a mystery, despite a $25,000 reward for information leading to an arrest.

“We handle a lot of investigations but a case like this, it kills you because you look at your own son,” said Arroyo, a father of two boys and the lead detective on the case. “We take it to heart.”

Central Park itself — with 250,000 daily visitors and dozens of potential entry and exit points surrounding its 843 acres — makes the investigation a challenge. Authorities are desperate for new photos or video that can help them, at a minimum, narrow the timeline of when the bag was placed at the base of a large rock near the southeast corner of the park and, at a maximum, identify a suspect.

“It really is a needle in a haystack,” said Lt. Michael Ruzzi, commanding officer of the police department’s Arson Explosion Squad. “But we’re going to look at every piece of hay.”

Golden, an avid outdoorsman and Eagle Scout, was with two friends looking for the best place to hang up a tightrope July 3 when he climbed off a large rock near the southeast entrance to Central Park and stepped on the bag, said his father, Kevin Golden.

That provided more than enough force to initiate the blast, which set off a loud boom, severing the then-18-year-old University of Miami student’s foot.

Paramedics rushed Golden to a hospital, where doctors said he would lose his leg below the knee, said the elder Golden, who learned of the injury when his son called from the hospital, just before going into surgery.

“His foot had been blown off and he’s sitting there talking to us on the phone,” recalled Golden, who hopped in a car with his wife and sped from Fairfax, Virginia, to New York. “A million different thoughts go through your mind when your child tells you that.”

Despite immediate concerns of terrorism, authorities ruled that out as a possibility, noting there has been no claim of responsibility or online chatter to indicate a terrorist act.

Then city officials indicated, incorrectly, that the explosion was the result of a homemade firework set off over the holiday weekend — a theory quickly disproved after forensic examinations showed there was no fuse or device. The investigators declined to name the substances in the bag, saying they didn’t want to give copycats any reason to make their own combustible mixture. They said instructions for such explosives can be found online.

Golden and his two friends were also intensely questioned and vetted at first. Authorities are now certain they had nothing to do with the blast.

“In this day and age, we’re perplexed by who would have done this and the reasons he may have done it,” said Kevin Golden.

The younger Golden remains optimistic, his dad said, returning to school on schedule to begin his sophomore year where he’s pursuing a degree in music engineering and adjusting to his new prosthetic. So far, friends and strangers alike have donated almost $85,000 to an online fundraising site meant to cover ever increasing health care costs.

“By all appearances he wants to put that in the past,” said Kevin Golden. “At the same time, whoever did this and is responsible for it is out there … this guy or people or whatever it is could do this again to someone else.”