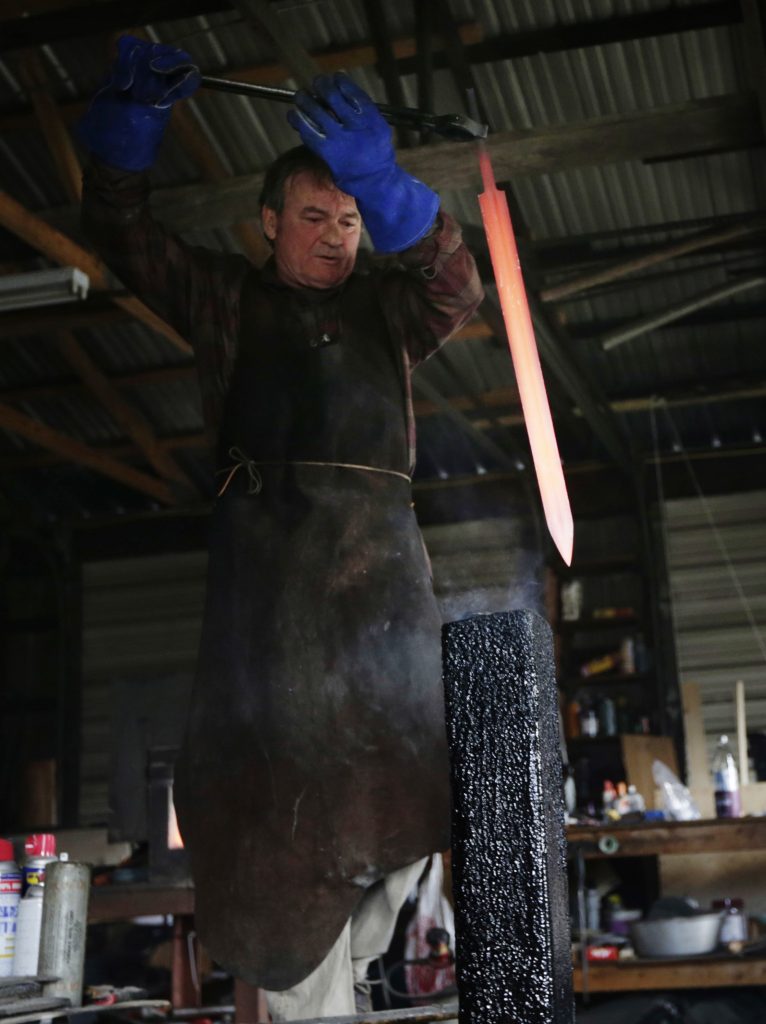 Through smoke and sparks and staccato banging from his anvil, John Lundemo forges swooping swords that look like they should be pulled from a stone or swung by a samurai.

The 60-year-old has carved out a niche making pricey blades that are inspired by history but liberally mix in elements of East, West and high art.

“I do tend to add my own flair,” Lundemo said in his shop recently. “Making exact copies, I don’t do.”

While not precisely like the weapons wielded by gladiators or knights, these razor-sharp weapons stretching up to 6 feet long and costing upward of $3,000 are built to be used — even if it’s for slashing milk jugs in the backyard.

Lundemo has been making swords for about three decades, about half that in his workshop 50 miles north of New York City. The forge, anvil and scalding oil tank speak to his craft. Lundemo’s sword fascination began as a young man, when he bought blades for mock sword fights with his brother. But there were problems with those steel swords.

“I was breaking them all the time. You know, halfway through a sword fight and your sword breaks, it’s annoying,” he said. “So I started making them.”

He forged blades in the back of a New Mexico jewelry shop and later after hours in the upstate New York sign shop where he worked. Those first swords weren’t good, he says, but he educated himself on the finer points of edge geometry, metal tempering and distal tapering, which refers to the blade getting thinner from guard to tip.

Over time, he established his brand Odinblades in what can be a cut-throat business. There is an army of sword makers who sell historical replicas, fantasy swords, “battle ready” swords for under $100. Retailer Kult of Athena in Elgin, Illinois, for example, sells swords from more than 30 makers.

“It’s definitely growing,” said owner Ryan Whittlinger. “The market for higher-quality, functional items is better today than it’s ever been.”

So who buys swords in the 21st century?

Collectors and history buffs who hang them on a wall, “cutters” who want a sharp and balanced weapon for slicing jugs, pieces of bamboo or test dummies, and sword fighters.

Theater groups account for some sales, too. The apparently racially motivated killing last week of a black man in New York City with a 26-inch sword illustrates the rare times when such weapons are still used for their original purpose.

Lundemo says he makes enough from swords for his wife and himself to pay the bills. They’re not getting rich, but the work has its benefits.