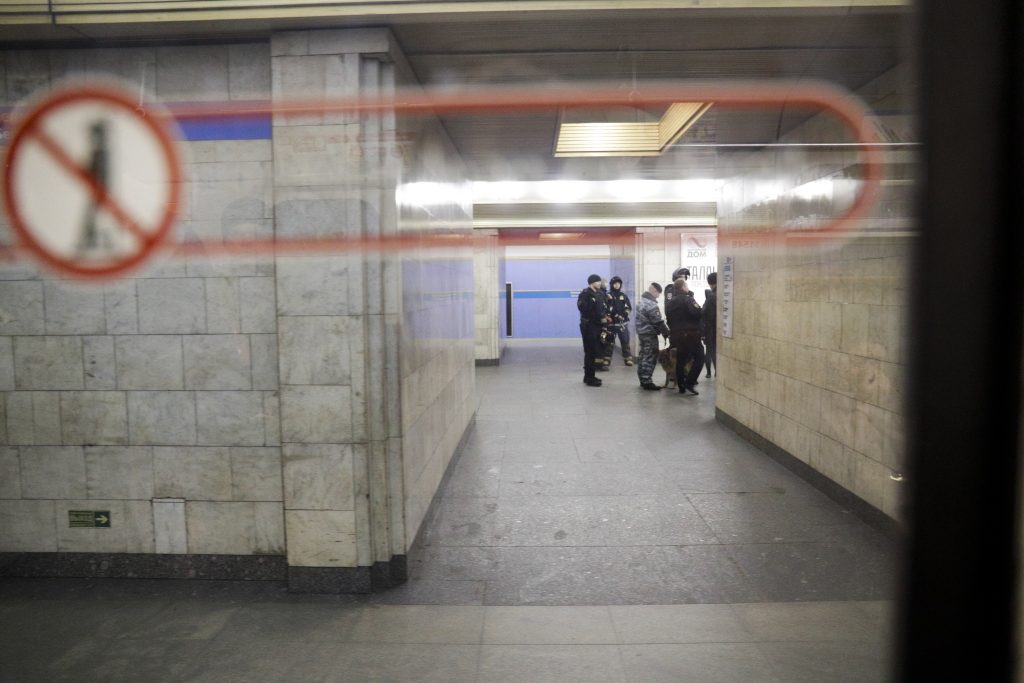 A blast in a St. Petersburg train carriage on Monday that killed 14 people and wounded 50 was probably carried out by a Russian citizen born in Kyrgyzstan, authorities from the predominantly Muslim central Asian state said.

Russian news agency RIA Novosti reported on Tuesday that authorities had received a warning of a possible second attack at the same Sennaya Ploshchad metro station. Interfax news agency said several fire engines were outside the station, which had been closed.

The explosion on Monday was a suspected suicide bombing by a perpetrator with ties to radical Islamists, Interfax cited a law enforcement source as saying. A spokesman for the Kyrgyz GKNB security service identified the suspect as Akbarzhon Jalilov, born in the city of Osh in 1995, but provided no other details.

Russia has been on alert against attacks on its soil in reprisal for its military intervention in Syria, where Moscow’s forces have been supporting troops loyal to President Bashar al-Assad. The Islamic State terror group has repeatedly threatened revenge attacks.

The bombing in Istanbul on January 1 that killed 39 people involved a suspect from the same area of central Asia. He said he had been acting under the direction of Islamic State terrorists in Syria.

If it is confirmed that the metro bomber was linked to radical Islamists, some sections of Russian society could see it as proof that Moscow’s decision to intervene in Syria has made civilians into targets.

But Russian Foreign Minister Sergei Lavrov said it was cynical to say the bombing in St. Petersburg was revenge for Russia’s role in Syria, RIA reported. He said the attack showed that Russia needed to press on with its fighting against global terrorism.

So far, no one has claimed responsibility. Officials said they were treating the blast as an act of terrorism, but there was no official confirmation of any link to Islamist radicals.

Kyrgyzstan, a former Soviet republic of six million, is a close political ally of Moscow and hosts a Russian military airbase.

A Reuters reporter visited a house in Osh which neighbors said was the family home of Jalilov, the man identified as the bombing suspect. The home, a modest but well-maintained one-story brick building, was empty.

Neighbors said Jalilov was from a family of ethnic Uzbeks, and that while they knew his parents they had not seen the young man for years. They said his father worked as a panel-beater in a car repair shop.

Russian President Vladimir Putin visited the site of the blast late on Monday. The explosion made a huge hole in the side of a carriage and blew off the door, strewing metal wreckage across the platform.

Passengers were seen hammering at the windows of one closed carriage after the train pulled into the station. Russian media said many suffered lacerations from glass shards and metal, the force of the explosion amplified by the confines of the carriage and the tunnel.

RIA Novosti quoted Russia’s health minister Veronika Skvortsova as saying on Tuesday that the death toll had risen to 14, with 50 wounded.

St. Petersburg media showed footage of the corpse of a bearded man they said was the perpetrator. The man resembled footage of a man captured on surveillance camera who Russian media said was a suspect.

The blast raised security fears beyond Russian frontiers. France, which has itself suffered a series of attacks, announced additional security measures in Paris.