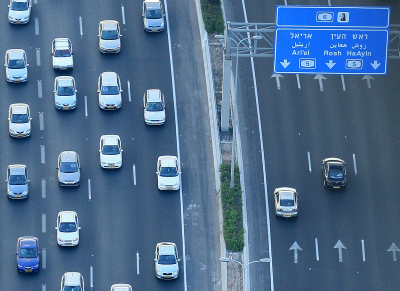 Eleven years after it was first conceived, what is arguably the most strategic highway in central Israel opened for public use Monday night.

In a gala ceremony, Transport Minister Yisrael Katz inaugurated Road 531, which stretches through the Sharon towns of Raanana and Kfar Sava to connect both the Coastal Road (Road 2) and the Ayalon Highway (leading to Tel Aviv and Herzliya) with the Trans-Israel Highway (Road 6).

The much-needed road provides a second east-west route for hundreds of thousands of commuters from the cities of the Sharon and of the Shomron into the Tel Aviv area. Until now the only east-west route that allowed such travel was Road 5, a three-lane artery that experienced congestion at almost any time of day or night. Road 531 will relieve the congestion for drivers going to not only Tel Aviv, but also to the Herzliya high-tech industrial zone, which is where it terminates.

The highway took nearly six years to complete, at a cost of over several billion shekels. The last segment of the road — a cloverleaf interchange that allows for cars to enter and exit Raanana and Kfar Sava — was completed in recent days and allowed for the completion of the highway at a cost of over NIS 1 billion, making it the most complicated and expensive interchange ever built in Israel. Altogether, Road 531 cost the taxpayers NIS 2.4 billion.

At the ceremony, Katz said that Road 531 was “much more than a highway. This is a part of a unique transportation project that includes roads, rails and new train stations,” which are set to open in another month. “Hundreds of thousands of drivers who in the past were forced to travel through congested cities will be able to reach their destinations much more quickly, thanks to 12 interchanges that allow for the full flow of traffic, with no stoplights. At long last we have fulfilled what seemed like a distant dream — being able to traverse the Sharon from east to west and in back quickly and efficiently.”