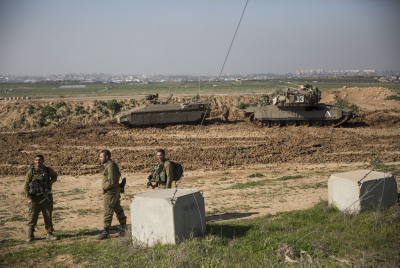 IDF forces in the Jenin area were searching Monday morning for the perpetrators of a shooting near an IDF outpost Sunday night. Several shots were fired at the outpost, but the shooters had disappeared by the time soldiers arrived at the source of the shooting. No one was injured in the incident.

Overnight Sunday, security officials said they arrested 4 wanted security suspects in other areas in Yehudah and Shhomron. The suspects were wanted for participating in rioting and throwing stones and firebombs that endangered Israeli civilians and IDF soldiers. Several of the suspects were also charged with belonging to Hamas. All were being questioned on their activities by security forces.

Also overnight Sunday, Egyptian sources said that they had eliminated one of the leaders of the Islamic State organization operating in Sinai. Salam Salma al-Hamdin had conducted numerous campaigns against Egyptian forces as head of the “Ansar Beit al-Maqdas” terror group. Israeli officials said he had also been involved in the firing of rockets at Israel, including attacks in the Eilat area.