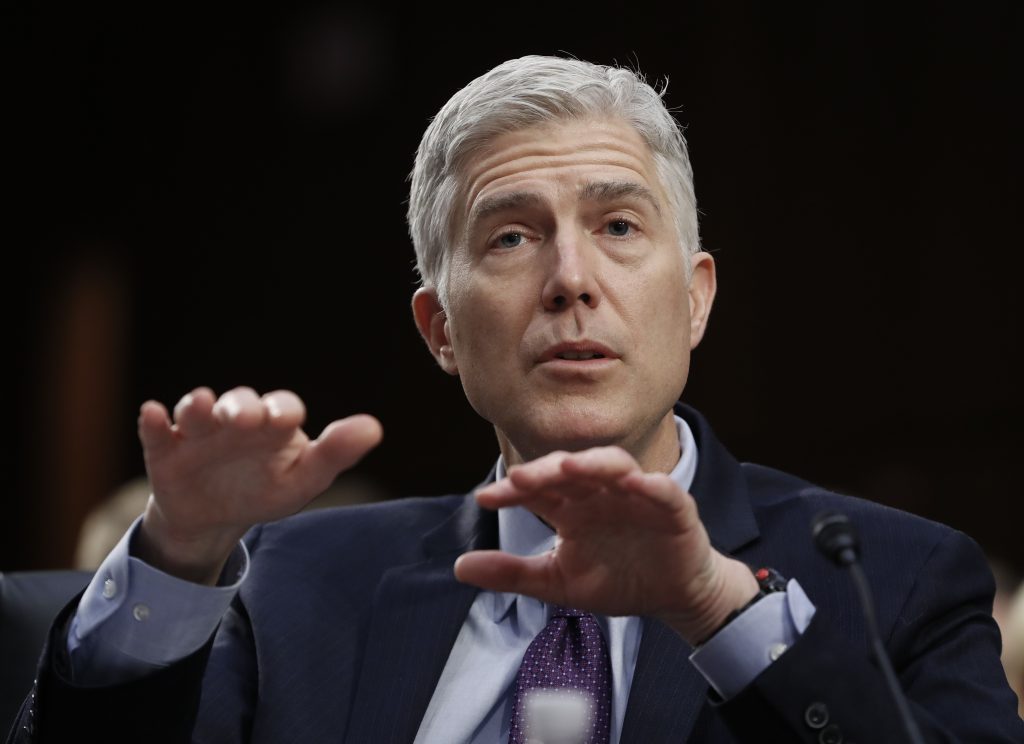 The Republican-led Judiciary Committee meets Monday and is expected to back Judge Gorsuch and send his nomination to the full Senate, most likely on a near party-line vote. Intent on getting President Trump’s pick on the High Court, Majority Leader Mitch McConnell, R-Ky., is likely to change Senate rules so that Judge Gorsuch can be confirmed with a simple majority in the 100-seat chamber, instead of the 60-voter threshold.

“Neil Gorsuch will be confirmed this week,” McConnell said on CNN’s “State of the Union” on Sunday, adding, “how that happens really depends on our Democratic friends. How many of them are willing to oppose cloture on a partisan basis to kill a Supreme Court nominee.”

So far, 36 Democrats and one independent have announced they will vote to block the nomination on a procedural cloture vote — a parliamentary step to advance a legislative issue — and oppose the choice. Sen. Jon Tester, D-Mont., who faces a tough re-election in a state President Trump won handily, announced his opposition on Sunday.

“With Judge Gorsuch on the bench, I am deeply concerned that dark money will continue to drown out the voices and votes of citizens, the Court will stand between women and their doctors, and the government will reach into the private lives of law-abiding Americans. These are not Montana values, which is why I cannot support this nomination,” Tester said in a statement.

Another Democrat in a Republican-dominated state who is up for re-election next year, Sen. Joe Donnelly of Indiana, announced he would support the president’s nominee. Donnelly called Gorsuch, 49, a federal appeals court judge based in Denver, “a qualified jurist who will base his decisions on his understanding of the law and is well-respected among his peers.”

Democrats, led by Minority Leader Chuck Schumer of New York, have vowed to block the nominee, infuriating Republicans, who argue the action is exceedingly rare for Supreme Court choices.

Although such a change in Senate rules might seem procedural or obscure, it is known on Capitol Hill as the “nuclear option” because it would amount to a dramatic departure from Senate norms of bipartisanship and collegiality.

It would not be unprecedented. In 2013, Democrats were in the majority and upset about appellate court nominees getting blocked. They pushed through a rules change lowering the vote threshold on all nominees except for the Supreme Court — from 60 votes to a simple majority.

In addition to Judge Gorsuch, the Judiciary committee will be considering two other nominations — Rod Rosenstein to be deputy attorney general and Rachel Brand to be associate attorney general. If confirmed, they will be the No. 2 and No. 3 officials at the Justice Department under Attorney General Jeff Sessions.