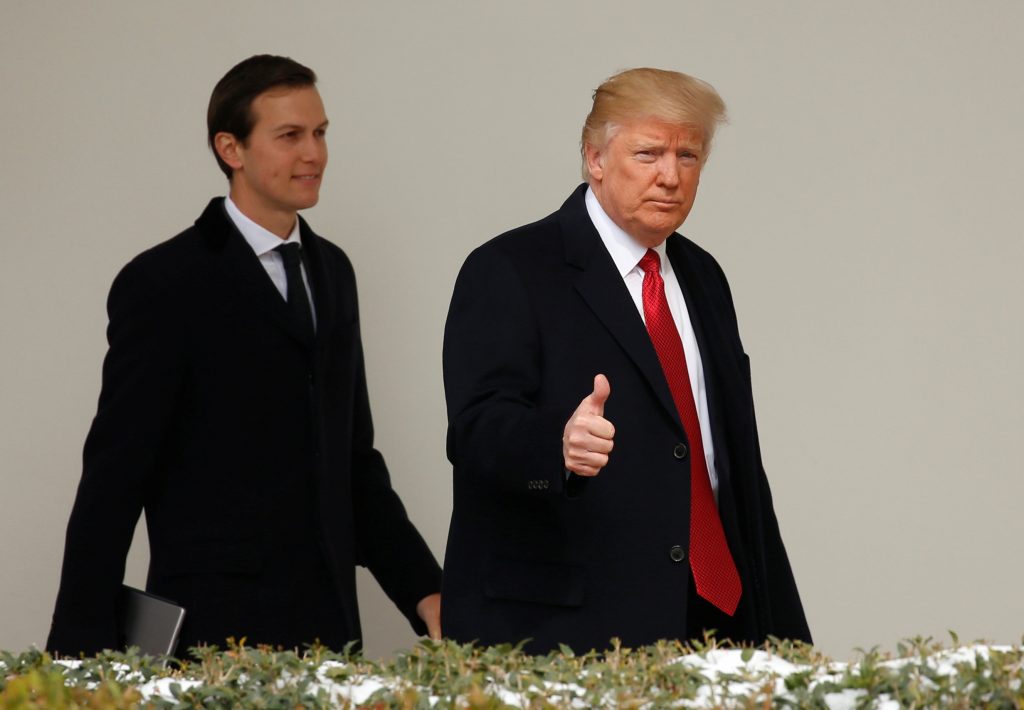 President Donald Trump’s son-in-law and senior adviser, Jared Kushner, is visiting Iraq with the chairman of the Joint Chiefs of Staff, an official said Sunday night.

Details about the trip to the Middle East with Gen. Joseph Dunford were not released. A senior administration official said Kushner wanted to see the situation in Iraq for himself and show support for the Iraqi government. The official wasn’t authorized to speak about confidential meetings by name and demanded anonymity.

Kushner’s West Wing portfolio is robust. He has been deeply involved with presidential staffing, recently launched a task force meant to modernize government using lessons drawn from the private sector, and has played the role of shadow diplomat, advising on relations with the Middle East, Canada and Mexico.

And though Kushner had no previous diplomatic or government experience, President Trump also tasked him with trying to broker a peace agreement between Israel and the Palestinians.

“If you can’t produce peace in the Middle East, nobody can,” President Trump told Kushner at a gala a few days before his inauguration.

Kushner was also the latest presidential associate to be swept up into the ongoing probe into contacts with Russian officials. The White House confirmed last week that he had volunteered to be interviewed by the Senate intelligence committee. North Carolina Sen. Richard Burr, the committee’s chairman, said that Kushner would likely be under oath and would submit to a “private interview” about arranging meetings with the Russian ambassador and other officials.

Kushner was expected to have a major role in meetings later this week between President Trump and Chinese President Xi Jinping at Trump’s winter retreat in Palm Beach, Florida.

The Iraq trip was first reported by The New York Times.

Kushner’s trip began against a backdrop of an ongoing investigation into civilian deaths in an area of Mosul near the site of an air-strike by U.S.-led coalition forces last month.

His visit marked an early foray for the Trump administration into the situation in Iraq and came just two weeks after Iraqi Prime Minister Haider al-Abadi said he was assured by the president the U.S. will accelerate its support for his country’s struggle against the Islamic State group.

Al-Abadi met with President Trump and Kushner in Washington last month and said he had the impression that the Trump administration would take a more aggressive approach, although he did not say what that might entail.

Defense Secretary Jim Mattis recently presented President Trump with the outlines of a comprehensive approach to defeating IS and other terror groups on a global scale, but specifics have yet to be worked out. Officials have indicated that the approach is unlikely to depart radically from the Obama administration’s strategy, at least with regard to ongoing efforts in Iraq and Syria.

Iraq was part of the Trump administration’s original travel ban but was removed from the revised version after a request from the Pentagon and the State Department highlighting Iraq’s key role in fighting the Islamic State terror group. The second travel ban, which restricts immigration from six Muslim-majority countries, has been halted by a federal court. The U.S. Justice Department has announced an appeal.