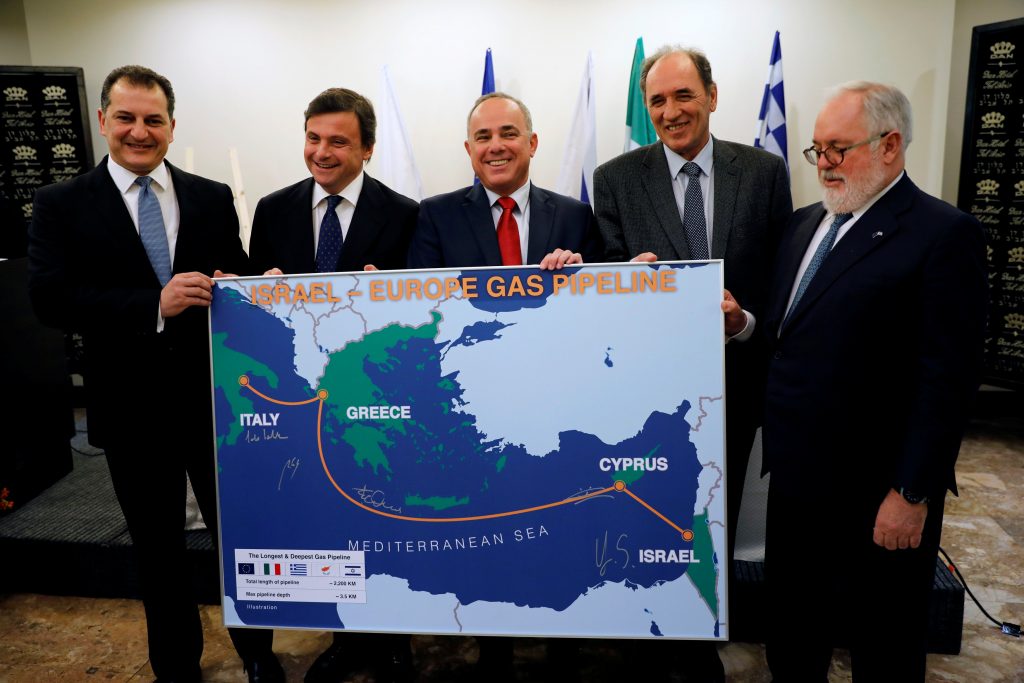 Israeli and European officials converted years of talk about a Mediterranean natural gas link into a written commitment on Monday, as they signed a joint declaration to build the worlds longest undersea pipeline.

“This is the beginning of our wonderful friendship between four Mediterranean countries – Israel, Cyprus, Greece and Italy,” National Infrastructure, Energy and Water Minister Yuval Steinitz proclaimed at a press conference in Tel Aviv. “This is going to be the longest and deepest subsea gas pipeline in the world. It’s a very ambitious project.”

The plans call for a $6 billion-$7 billion pipeline that will carry Israeli and Cypriot gas to Greece and Italy. The pipeline should be operational by 2025.

The announcement follows a multi-million euro feasibility study commissioned by the European Commission and carried out by IGI Poseidon, a 50-50 joint venture between Italian energy company Edison and Greek DEPA Group.

Monday’s declaration was not final, however, and the intention is to aim for formal contracts by 2020.

So far, though, the indications are that the ambitious project will eventually be brought to fruition.

“We strongly support the development of the region as a future gas supplier,” said European Commissioner for Climate

Action and Energy Miguel Arias Cañete. “It is clear that the potential resources of this region are very significant.”

“We support the East Med project and look forward to the rapid completion of the study phase,” he said.

Italian Economic Development Minister Carlo Calenda said that his country supports the project as a replacement for coal.

“We think this project in the next decades can be a real pillar of our energy strategies,” he said. “Now we need to speed up the project to realize it.”
Greek Environment and Energy Minister Giorgos Stathakis noted that the partners are at present in an initial phase.
“The next steps in the development of the project will need the full support of the ministers and the commission,” he said. “This meeting today is a major step toward this direction.”

Steinitz stressed that it’s a “top priority for the four countries,” and said that they decided on Monday to instruct their director-generals to meet every 60 days, with the goal of shaping a quadrilateral memorandum of understanding by the end of 2017.