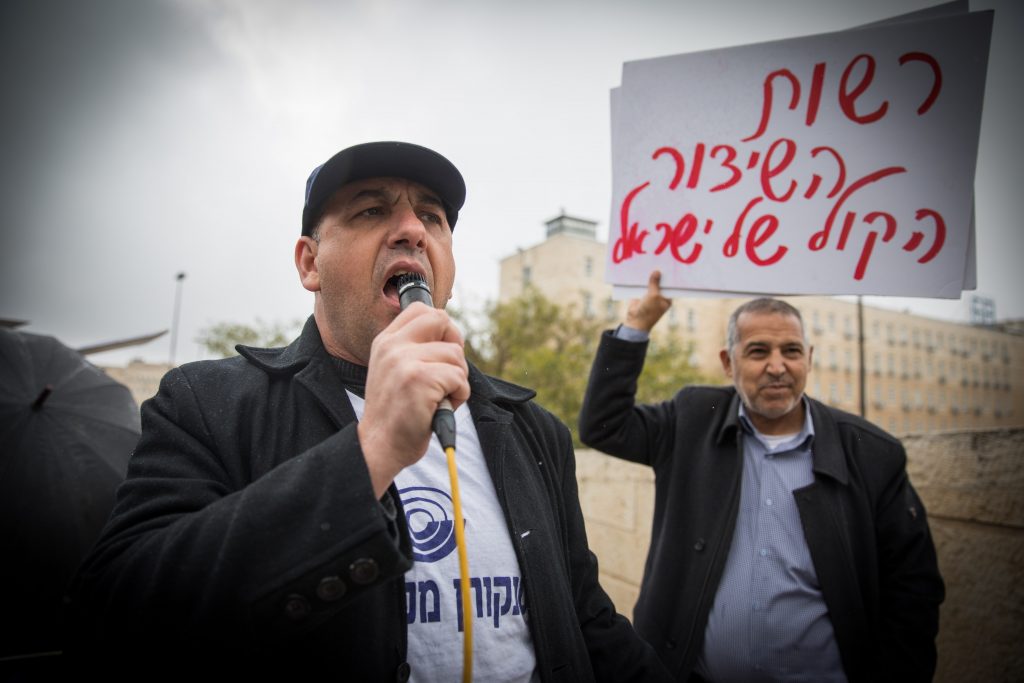 Histadrut head Avi Nissenkorn on Monday declared a work dispute — which will eventually lead to a strike for all public sector workers in Israel, over the ongoing dispute whether or not to close either the Israel Broadcasting Authority and/or the new Israel Broadcasting Corporation. According to Nissenkorn, the deal worked out between Prime Minister Binyamin Netanyahu and Finance Minister Moshe Kahlon, who will throw hundreds of workers of both organizations out of work; and the Histadrut “cannot sit idly by while the rights of workers are so badly harmed in this new and untested manner.”

Under Israeli labor law, a work dispute must be declared two weeks in advance of the declaration of a strike. The parties to the dispute are supposed to enter negotiations to try and work out a deal; if that is impossible, then the strike can proceed. In this case, the parties to the dispute are the IBA and IBC; and short of keeping them both open, it appears there is little the government can do to satisfy the demands of the Histadrut.

The compromise entails relieving the two heads of the IBC — Gil Omer and Eldad Kovlantz — of most of their responsibilities in the production of news programs. A separate organization that will be responsible for news broadcasts will be set up, and it will draw its staff from the IBA workers who are set to lose their jobs on April 30th, when the Authority officially closes down. Politicians on the left have been livid over the move, claiming that it was a bid by Netanyahu to control the media. Netanyahu had originally been in favor of replacing the IBA with the IBC, but changed his mind, apparently because he felt that the staff being gathered to run the organization was radically leftist.

Just as unhappy have been workers in both organizations, in turn. In recent weeks, IBA workers have staged angry protests demanding that the government keep them on the job; but after the compromise was announced, it was the turn of IBC workers to loudly denounce the government. Speaking over the weekend, Meretz head Zehava Gal-on said that Netanyahu and Kahlon “dragged the whole nation through the mud over their obsession and the Prime Minister’s paranoia, who wants the media to obey his will. They have caused workers of both organizations to have to worry about their jobs. Netanyahu wants to turn the media into his ‘poodle,’ instead of it being the guard dog Israel needs.”

Nissenkorn has also “contributed” to the charged labor atmosphere of recent weeks, as various government departments and organizations in turn have staged short strikes or work actions in solidarity with the IBA workers. Now, the Histadrut will go to bat for IBC workers, Nissenkorn said Monday, not so much to keep them on the job — most of them have not started working yet — but because of the “atmosphere of unclear and unstable labor situations, which leave workers in doubt as to their futures.” With that, Nissenkorn did not make any suggestions as to how to resolve the matter. Under the compromise, about half of the staffs of each organization will be let go.

In addition to ensuring the future of workers of both organizations, Nissenkorn also said that the strike would encompass other issues — especially that of temporary workers. The union has conducted work actions in the past over the large number of contract workers employed in the public and private sector — who, because they do not have permanent jobs, do not receive many of the benefits of “regular” workers — and Nissenkorn said that the government has failed to follow through on previous promises to curb the use of these workers.