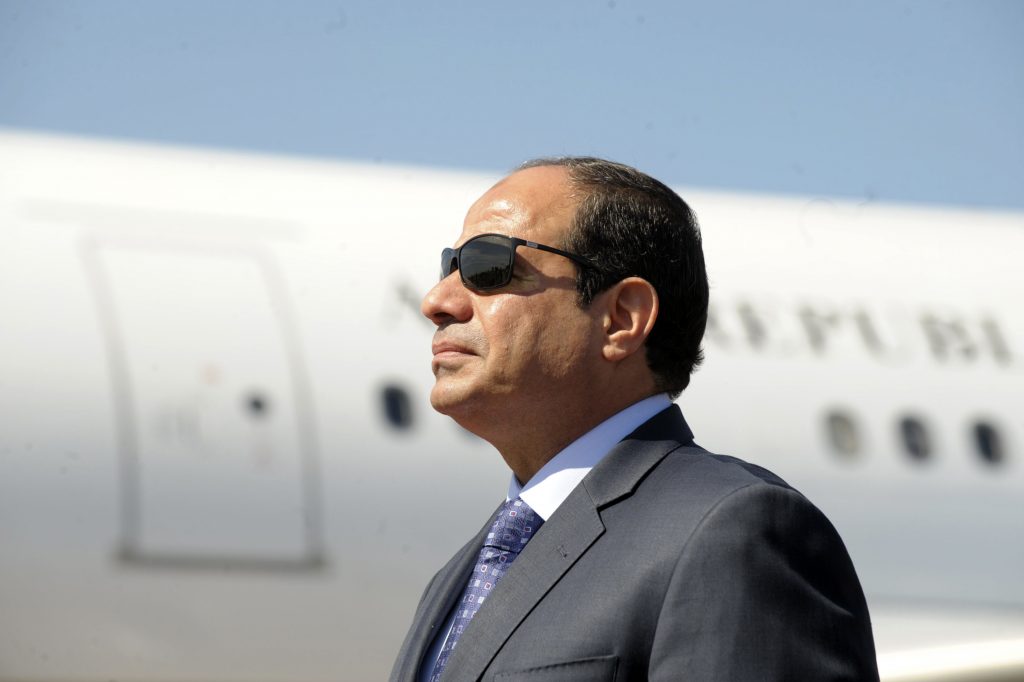 Making his first official visit to Washington, Abdel-Fattah el-Sissi’s meeting this week with U.S. President Donald Trump would be a significant step in the international rehabilitation of the general-turned-politician who was kept out of the Obama White House.

But, analysts caution, there may not be much more that Egypt’s president could take from Monday’s White House visit, branded as historic by pro-government media at home.

There has been no official word on the specifics of the wish list el-Sissi is taking to Washington, but expectations include more military aid, designating el-Sissi’s nemesis — the Muslim Brotherhood — as a terrorist group, and restoring the kind of strategic partnership Egypt enjoyed with the United States for more than 30 years.

Another issue that may arise is the Arab League’s territorial demands in exchange for peace with Israel, reaffirmed last week. El-Sissi, whose country already has peace with Israel, may be in a position to help Trump push for a broad deal and gain points in Washington — but there is potential for disagreement as well.

Admittedly, the Egyptian leader has reason to be optimistic about his relations with Trump.

Former President Barak Obama kept el-Sissi at arm’s length after the Egyptian leader rose to power in 2013 when, as defense minister, he led the military’s ouster of the Islamist Mohammed Morsi. He was elected president a year later but has ruled with an iron grip.

Obama never invited el-Sissi to the White House, allowed his administration to repeatedly admonish his government over its human rights record and briefly suspended some U.S. military aid, which normally runs at $1.3 billion a year.

The Egyptian media responded by accusing Obama of supporting the Brotherhood and destabilizing the country through his administration’s backing of a popular 2011 uprising that ousted long-time ruler Hosni Mubarak.

In contrast, Trump and el-Sissi hit it off from their first encounter in September, when the Republican nominee spoke of “good chemistry” between them following a meeting on the sidelines of the U.N. General Assembly.

The same media that vilified Obama hailed Trump as a strong leader who will treat Egypt with respect and appreciated el-Sissi’s leadership. Moreover, there is expectation that a Trump administration will be far more tolerant of human rights abuses in the name of stability and counter-terrorism.

A senior White House official was non-committal on what the administration was prepared to do on military aid and the Brotherhood. Briefing reporters, he spoke of Washington’s wish to sustain a “strong security assistance relationship” with Egypt.

Washington wants to use el-Sissi’s visit to “reboot the bilateral relationship and build on the strong connection” the two leaders established when they met in New York, the official said, speaking on condition of anonymity.

The Egyptian leader, Hanna said, has steadily earned international respectability in large part due to a key Western shift in the perception of Egypt and the rest of the Middle East — emphasizing stability over human rights or democratic reform.

But a convergence of interests on Monday is far from guaranteed.

“Probably too much has been made of the ‘chemistry’ between Trump and el-Sissi — there are convergences of interest, and there is the absence of tension that existed with the Obama administration, but that’s about it,” said H.A. Hellyer, a senior fellow at the Atlantic Council.

El-Sissi may find himself pushing back against some of the Middle East policies reportedly being considered by the Trump administration, like creating a military coalition of Sunni Arab U.S. allies against the perceived threat of non-Arab Shiite Iran. There has been talk of deeper U.S. involvement in the Saudi-led coalition’s fight against Shiite rebels in Yemen, with Egypt possibly being urged to contribute forces.

Egypt has never shared Saudi Arabia’s view of Iran as a looming existential threat and has also resisted pressure from Riyadh to contribute troops to the war in Yemen. Trump’s position on Tehran seems closer to the Saudi perspective.

Egypt, however, does see an existential threat from the turmoil in Libya, with which it shares a porous desert border. Cairo would prefer Washington more involved in the search for a political settlement unifying the country’s rival administrations, thus paving the way for crushing militant groups operating there.

El-Sissi may find it difficult to afford, politically or financially, involvement in a foreign military adventure.

His country is in the middle of a deep economic crisis; his army is engaged in a tough fight in Sinai against militants led by a local affiliate of the Islamic State group and his security forces are conducting a long-term crackdown on critics while watching for any signs of public unrest fueled by the soaring cost of living.

“The weakness of the Egyptian economy and the continuing predicament over terrorism in Sinai don’t leave in Egypt’s hands many important cards,” wrote Mohamed el-Menshawy, a U.S.-based analyst.

Another possible source of differences between Trump and el-Sissi may be the Israeli-Palestinian conflict.

Egypt has for decades been a staunch supporter of the Palestinians’ right to statehood. El-Sissi reasserted that position when he addressed an Arab summit in Jordan last week, saying a Saudi peace plan adopted by Arab leaders in 2002 remained the basis for a settlement.

The plan provides Arab recognition of Israel in exchange for its withdrawal from lands occupied in 1967, allowing the creation of a Palestinian state with eastern Jerusalem as its capital.

Veteran columnist Raghida Dergham wrote in the pan-Arab daily Al-Hayat Friday that Trump could push el-Sissi to abandon this initiative and convince other Arab countries to de-emphasize the Palestinian issue.

“What the American president wants from Egypt is to remove the Palestinian question from Arab priorities and marginalize the Arab initiative, which cannot be delivered by el-Sissi,” she wrote.

Jill Colvin in Washington contributed to this report.