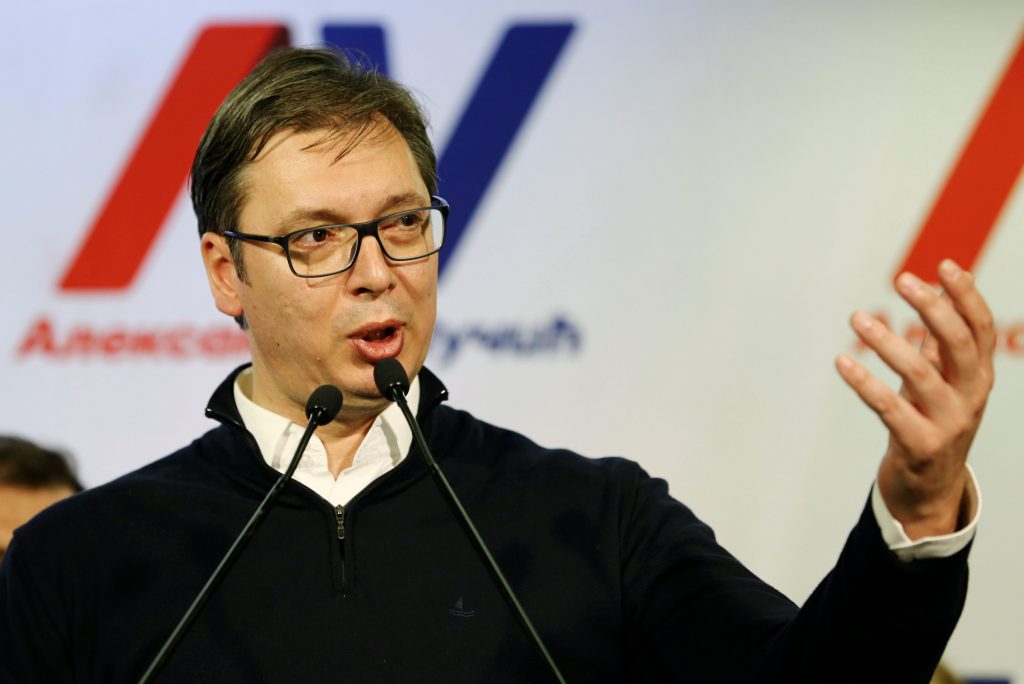 Conservative Prime Minister Aleksandar Vucic won Serbia’s presidential election on Sunday by a huge margin, confirming his domination of the Balkan country, as he pursues a delicate balancing act between Europe and Russia.

Mr. Vucic, 47, avoided a run-off by taking around 55 percent of votes; his nearest rival, opposition candidate and former rights advocate Sasa Jankovic, trailed on just over 16 percent, according to two projections by polling groups CRTA and Ipsos.

Mr. Vucic will take on the largely ceremonial post at the end of May, but is expected to retain de facto power through his control of Serbia’s ruling Progressive Party.

Vucic made clear his change of job would not alter the former Yugoslav republic’s geopolitical balance between the European Union, which Vucic wants Serbia to join, and Russia, with which Serbs share their Orthodox Christian faith and Slavic heritage.

He thanked German Chancellor Angela Merkel and Russian President Vladimir Putin, both of whom he met during the election campaign.

“For me it is important this election demonstrated that a large majority of Serbian citizens favors the continuation of the European path while maintaining close ties with China and Russia,” Mr. Vucic told cheering supporters.

Despite economic growth and greater fiscal stability, Serbia remains mired in poverty and corruption. But to his supporters, Mr. Vucic is a firm hand in a troubled region.

“I voted for stability, we’ve had enough wars,” said Bozica Ivanovic, a 65-year-old pensioner who voted for Vucic. “We need more jobs for younger people and if we can get higher pensions and salaries, even better.”

Mr. Vucic’s opponents, however, say he has an authoritarian streak that has led him to take control of the media in Serbia since his party rose to power in 2012 and he became prime minister three years ago.

He denies the charge but has struggled to shake it, given his record when last in government in the dying days of Yugoslavia.

Then in his late 20s, Mr. Vucic was Serbia’s feared information minister behind draconian legislation designed to muzzle criticism of the government during the 1998-99 Kosovo war.

“If there’s no second round, that means we live in a society that is politically immature,” sociologist Jovo Bakic told N1 television. “Where else do you not get a second round? In North Korea.”

Twenty-five-year-old student Luka Maksimovic, who ran as a white-suited parody of a sleazy political fraudster called Ljubisa “Beli” Preletacevic, came third with just over nine percent, picking up the votes of Serbs disillusioned with the country’s political class.

“I voted for Beli,” said 30-year-old Dejan Markovic, an unemployed metal worker. “The so-called opposition candidates have betrayed us in the past and Vucic is lying to us all now, so Beli is the only way to mock all this hypocrisy.”

As president, Mr. Vucic will have few formal powers, among them the right to send legislation back to parliament for reconsideration.

But he is widely expected to appoint a loyal ally as prime minister and try to keep a tight rein on policy, as former President Boris Tadic, then of the Democratic Party, did between 2004 and 2012.

Some analysts said that could prove difficult.

“Vucic will now be distanced from everyday policy-making and executive affairs and will have to rely on a proxy,” Eurasia Group wrote on March 30. “This will likely generate some tensions in the chain of command.”