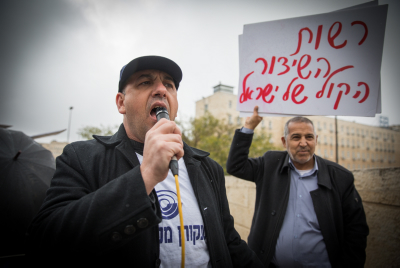 Although Prime Minister Binyamin Netanyahu and Finance Minister Moshe Kahlon have resolved their differences over the fate of the Israel Broadcasting Corporation (IBC) and Israel Broadcasting Authority (IBA), no one else seems to be happy about the compromise they arrived at – especially employees of the IBC, who, as a result of the new deal to keep the IBA in business as preparers and presenters of news broadcasts, will see half their number fired even before they begin working. As the IBA is closing down, about half of the workers there will lose their jobs as well.

Where for the last few weeks IBA workers conducted loud and angry demonstrations against the closure of their organization, it was now the turn of IBC workers to protest, and hundreds of them gathered in Tel Aviv on Motzoei Shabbos over the compromise, which will see all responsibilities for broadcasting the news taken away from the IBC. A separate organization that will be responsible for news broadcasts will be set up, and it will draw its staff from the IBA workers who are set to lose their jobs on April 30th, when the Authority officially closes down.

Politicians on the left have been livid over the move, claiming that it was a bid by Netanyahu to control the media. Netanyahu had originally been in favor of replacing the IBA with the IBC, but changed his mind, apparently because he felt that the staff being gathered to run the organization was radically leftist. Speaking over the weekend, Meretz head Zehava Gal-on said that Netanyahu and Kahlon “dragged the whole nation through the mud over their obsession and the Prime Minister’s paranoia, who wants the media to obey his will. They have caused workers of both organizations to have to worry about their jobs. Netanyahu wants to turn the media into his ‘poodle,’ instead of it being the guard dog Israel needs.”

Zionist Camp leader Yitzchak Herzog, meanwhile, said that coalition MKs opposed to the doings in the government were still welcome to join him in forming an alternative government. One way or another, the coalition will fall, and there will be new elections, he told Channel Ten. “There is too much tension among the partners to continue as they have been,” Herzog said, but there is no need to go to new elections. “There are alternatives, and we intend to take advantage of the next crisis and offer a new government.” Herzog said that the votes he had to form the new government when it appeared that Netanyahu would break up the government over the IBA/IBC issue were still extant, and that a new government could be formed without elections.

Meanwhile, Channel Ten revealed recordings of conversations between Netanyahu and Kahlon that led to the compromise. The two discussed the fate of each other if elections were held, and both decided to back down, as it was in their mutual interest to do so. In the conversations, Netanyahu pointed out the weakness of Kahlon’s Kulanu, which nearly every poll has falling from ten seats to six if elections were held now. Netanyahu, for his part, said that he was not afraid of elections. “I already went to elections over other issues, like Yisrael Hayom,” referring to the daily free newspaper that Labor MKs sought to put out of business because it was given out for free. Kahlon retorted that those same polls showed that Yair Lapid was a clear challenger. “If there are elections I will lose seats, but you may not be Prime Minister again,” Kahlon said.

With the compromise, government sources told Channel Ten, both Netanyahu and Kahlon will be able to declare victory. Kahlon had insisted that the IBA be closed down and broadcasting privatized via the IBC. Netanyahu had originally been in favor of shuttering the IBA and has since changed his mind. Among the reasons, he said, was that he had promised to ensure that as many IBA workers as possible could retain their jobs. Eventually Netanyahu accused the IBC of becoming too politicized and demand that it be shut down. With the news now out of the hands of the IBC, and a separate organization to handle it consisting of IBA employees, Netanyahu will have achieved his goals – while Kahlon can point to the closure of the Authority as his political win.

Commenting on the arrangement, coalition chairman MK David Bitan expressed satisfaction, saying that “this is a fair compromise that satisfies both sides and that the Prime Minister and Finance Minister can live with. As a result we will be able to avoid elections and ensure that the coalition remains intact to continue benefiting the country. It’s good for the Likud, good for Kulanu, good for the media and good for Israel.”