Israel Mother of Threat Perpetrator: ‘He Has a Growth in His Brain’
Israel 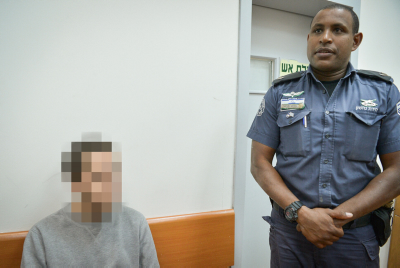 The mother of the 19 year old Israeli-American citizen who was arrested for phoning in hundreds of threats to Jewish community centers and institutions for at least three years, said she could not give any specific reason for her son’s behavior, but that it was clearly linked to his autism. “He likes Judaism, and he has acquaintances and friends in the United States who are members of one of the centers that were threatened. He was worried about them, as we were,” said the mother, identified only as S., in an interview with Channel Two.

If anything is to blame, it could be a physical condition. “About five years ago we saw that there was a growth in his brain,” said S. “It could be that this was causing the trouble. I apologize for the hurt he caused, but this was not done on purpose.”

The family immigrated to Israel about 15 years ago. M., the youth who was arrested several weeks ago for the threats, attended a Jewish day school for about a month – and was then told to leave, because he was unable to sit quietly. “I knew he was very smart because I used to buy him puzzles when he was very young, and he would solve them in minutes,” said S. “But he couldn’t sit still in school.” About a year later the family immigrated to Israel, settling in Ashkelon to be near her husband’s family.

M. was sent to school in Ashkelon, but here too he was unable to concentrate, and S. eventually decided to homeschool him, quitting her job as a biochemist to be with her son full time. “He was diagnosed as having a form of autism, and he excelled at some things, as some autistic-spectrum children tend to do, but he had no social skills,” said S. Although they did try to encourage M. to make friends, he was largely unable to do so. He was also rejected by the IDF.

Instead, he concentrated on his internal world, eventually reaching out to the rest of the world through computers. “He had three computers on his desk, but I had no idea what he was doing with them,” said S. According to Israeli investigators and the FBI, M. was using those computers to make voice over IP phone calls to Jewish institutions for three years, threatening them with bombs and other dangers.

“I don’t know why he did these things, and even now I can’t believe it,” said S. “He doesn’t know why he does these things either. It is part of his autism. He is clearly a genius, but he is also very childlike. This is not a typical 18 and a half year old who joins the army.”

FBI officials are in Israel questioning the youth and his father – who has since been released – and police said that they are awaiting an extradition request from the United States, so that he can be tried in U.S. courts. While sources in the police said that it would be up to the Justice Ministry to make that decision, there was a “good chance” the request would be met. At least a dozen FBI agents are currently in Israel, with several of them from the Bureau’s cyber unit helping to crack the case, police said.

Police also said that they were investigating the possibility that the youth was paid by outside sources for this activity. According to investigators, he had a Bitcoin account that was active in recent weeks, with large deposits made from an anonymous source. Bitcoins generally cannot be traced to individuals, as the entire system is built on anonymous accounts and transfers.

S. said she would prefer that her son remain in Israel. “I am begging for forgiveness for him,” she said. “He has a growth in his brain. This could happen to anyone.”