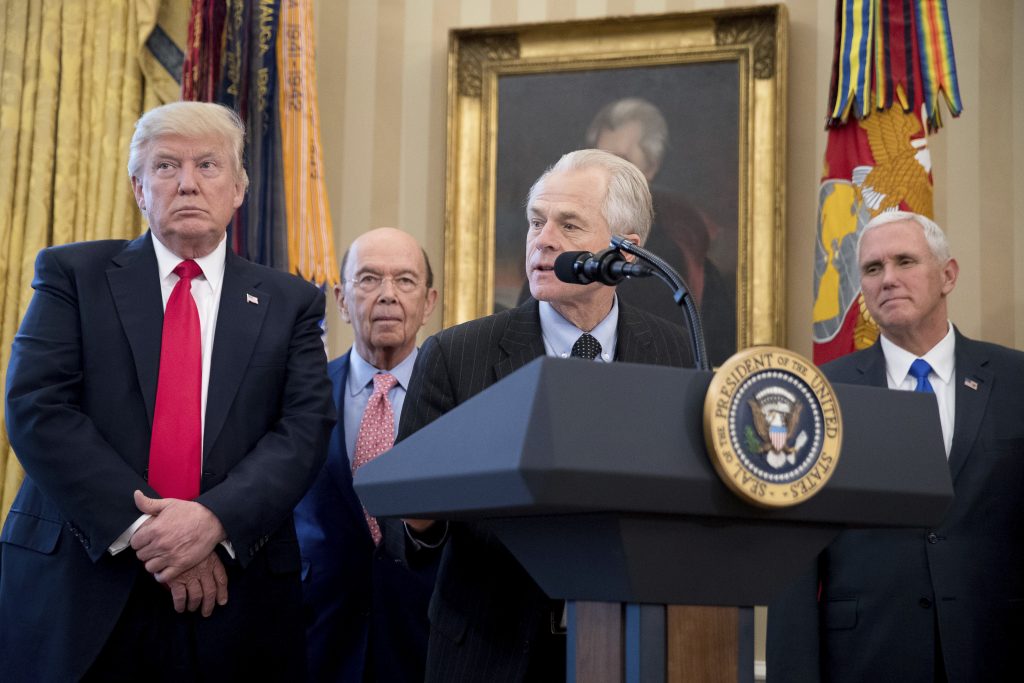 Soon after President Donald Trump took office, an executive order was drafted to suspend talks with China on an obscure but potentially far-reaching treaty about bilateral investment.

After eight years and two dozen rounds of negotiations, the treaty terms were almost in final form. Pulling out after so much time and effort would be a clear message that the Trump administration meant to take a new and tougher approach to China.

But the executive order never got to the president’s desk. It was shelved, according to sources inside and outside the White House, at the behest of former Goldman Sachs president Gary Cohn, now Trump’s top economic adviser.

Killing the order was a small victory for a White House faction that supports free trade and the global economy. But it was only an opening skirmish in what promises to be a long and bitter struggle over trade policy that so far is being waged behind the scenes in the Trump administration.

Two distinct camps have formed inside the upper reaches of the new administration, which was elected partly on a promise to crack down on U.S. trading partners. One side is committed to the protectionist and nationalistic policies of Trump’s campaign and the other to the free-trade strategy underpinning the current global economy.

Trump Friday signed two executive orders on trade that could be seen as laying the groundwork for stronger trade actions. One launches a 90-day examination of the causes of the U.S. trade deficit, and the other calls for steps to halt the undercollection of billions of dollars of duties on unfairly traded imports, although the second order sounds similar in purpose to a bill that passed last year.

The pro-free trade faction appears to have scored another victory in shaping the early plan to renegotiate the North American Free Trade Agreement. Trump had promised sweeping changes in NAFTA or even withdrawal from it, but the administration’s draft letter circulated in Congress this week proposes relatively modest changes to the agreement with Canada and Mexico.

While the details of trade policy are often arcane, the real-world consequences are profound. Millions of American jobs may have been moved overseas as a result of free-trade policies, and millions more are tied directly or indirectly to that trade.

Even the most high-profile American companies, like Ford, General Motors. General Electric, Apple and Google, are inextricably tied to the global economy.

Cohn, who heads Trump’s National Economic Council, leads the faction in the administration that favors open-trade policies that have been a hallmark of Republican and Democratic presidents alike for more than half a century.

Most of Wall Street and leaders of many large American corporations argue that open borders expand markets, enhancing overall U.S. economic and national interests. Goldman Sachs, where Cohn worked, has been a strong advocate for the U.S.-China investment treaty.

Cohn’s team is stacked with like-minded veterans of investment banking and noted internationalists such as Kenneth Juster, a former partner at the global private equity firm Warburg Pincus, and Andrew Quinn, a top negotiator of the Trans-Pacific Partnership that President Barack Obama orchestrated. That agreement was rejected by Congress and Trump buried it when he became president.

In the other camp, Peter Navarro presides over a tiny staff as director of the newly created White House National Trade Council. So far, Navarro’s office has only two desks and a large oil painting depicting an earlier industrial age of blue-uniformed workers building ships in America.

Provocative and hard-edged, Navarro, a longtime business professor at the University of California, Irvine, has turned off some lawmakers and business circles with his abrasive manner and focus on protectionist policies he says would lower U.S. trade deficits and help American businesses and workers.

Yet much as he may turn off traditional free traders, Navarro is closer in style and substance to Trump and his chief strategist, Steve Bannon.

Navarro has been a particularly outspoken critic of China’s economic policies and, like Trump, has advocated large tariffs and other unilateral actions to counter a global trade system that he sees as ineffective in advancing U.S. interests.

On China and Trump’s “Buy America” principle in general, the protectionists are likely to find an ally in Wilbur Ross, the new commerce secretary, and in Robert Lighthizer, nominated to be the U.S. trade representative, historically the main White House spokesman on trade. Ross and Lighthizer are sharply critical of China’s business practices and have advocated much tougher measures to protect America’s steel industry, for example.

At the same time, Ross and Lighthizer are expected to add a more nuanced and realpolitik dimension to Trump’s often obstreperous threats to impose tariffs and blow up trade deals. Ross is a billionaire and turnaround specialist, and Lighthizer is a former Senate counsel and seasoned trade negotiator.

After meeting with Ross last week, Myron Brilliant, the U.S. Chamber of Commerce’s head of international affairs, says he doesn’t see Trump’s trade squad pursuing “blanket tariffs” on imports. Still, what worries many economists, business leaders and foreign trading partners, is that excessively hardball tactics by the administration could start a trade war that could lay waste to half a century of economic progress here and around the world.

Although Trump’s campaign speeches were filled with grim warnings about what he said was the disastrous condition of the American economy, defenders of the global economy point out that the U.S. as a whole and most of its citizens are several times more prosperous than they were even a few decades ago.

Free trade and, perhaps more important, technological advancements have no doubt displaced many U.S. workers. And the economic slowdown, with increasing concentration of wealth, has left many Americans anxious and pessimistic about the future.

Overall, however, the evidence is far from clear that reverting to the nationalistic and protectionist policies of the late 19th and early 20th centuries would alleviate those problems.

Nikia Clarke, executive director of World Trade Center San Diego and a Commerce Department advisory council member, is particularly concerned about the fate of NAFTA, the 23-year-old pact that Trump has repeatedly characterized as a “disaster.”

“Making it go away would be devastating,” she said, noting that the uncertainty has prompted companies in her area to put their Mexico expansion plans on ice.

Trump did not keep his promise to label China a currency manipulator as soon as he took office. In fact, for all of Trump’s China bashing during the campaign — accusing it of dumping goods and robbing the U.S. of intellectual property and many jobs — the president has been unusually silent on China since taking office.

Nor has he offered anything about trade with Japan, which Trump has been critical of since the 1980s.

Trump did withdraw from the Trans-Pacific Partnership, as he said he would do, but the 12-nation deal was already moribund by the time he took office. And although Trump also renewed his promise to renegotiate NAFTA, the White House has yet to provide the required 90 days’ notice to open talks.

One substantive sign of where the administration may be headed will come April 15, when Trump’s treasury secretary, Steven Mnuchin, must decide whether to officially label China, or any other nation, a currency manipulator.

Neither Obama nor President George W. Bush ever did so, even when Beijing clearly held down its currency value to support its exporters. Bush and Obama worried about embarrassing the Chinese and souring bilateral relations.

More recently, China has let the yuan float more freely, and if there has been any manipulation it has been to prop it up against free-market forces that have devalued the currency.

Mnuchin has not shown his hand. Hard-liners against free trade took encouragement after Mnuchin, at the Group of 20 finance ministers’ meeting in Germany in March, declined to sign off on language disavowing protectionism in the group’s communique.