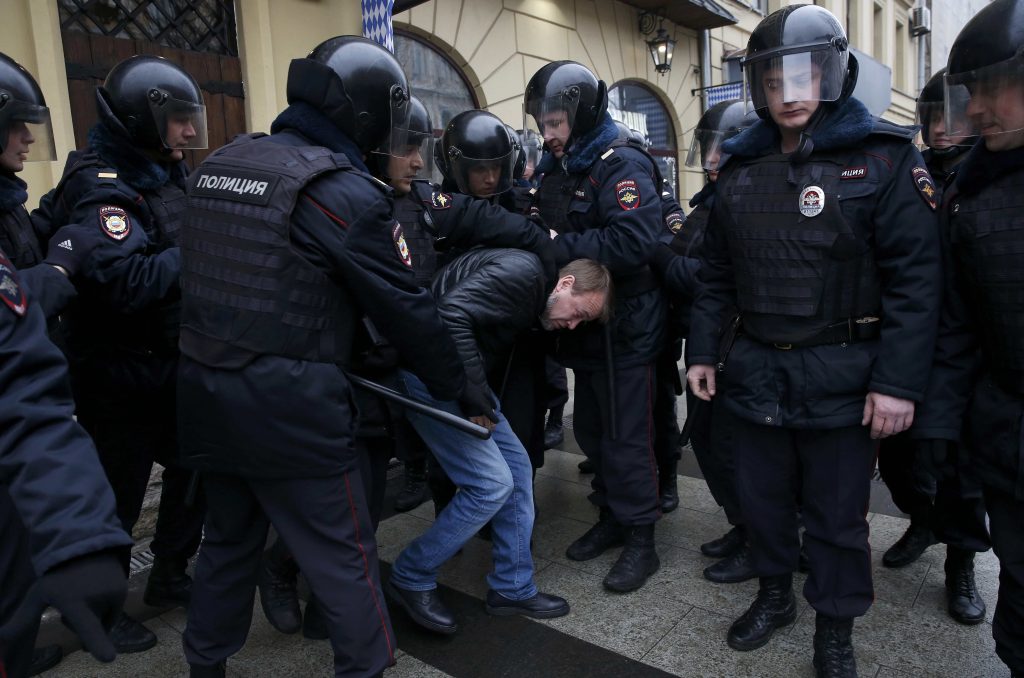 Police in Moscow detained around 30 anti-corruption protesters who took to the streets on Sunday in a follow-up of last week’s large-scale demonstrations in the capital of Russia, according to a Reuters witness.

The turnout was much smaller than at rallies last week, when hundreds of protesters including a prominent Kremlin critic, Alexei Navalny, were detained as they went out to demonstrate against corruption, demanding the resignation of Prime Minister Dmitry Medvedev.

On Sunday, plainclothes officials and police detained between 20 and 30 people in central Moscow as they tried to organize a march toward the Kremlin, the Reuters witness said.

“Now it is obvious that the problem has escalated because there are so many detained in different cities from Vladivostok to Kaliningrad,” said Ilya Kurzinkov, one of several students from Novosibirsk in Western Siberia who joined in the rally in support of the Muscovites.

There were some 100 protesters in the center of Moscow, a significantly smaller group than at last week’s protests, reckoned to be the biggest since a wave of anti-Kremlin demonstrations in 2011–2012.

The protests come a year before Russia’s presidential election, in which Vladimir Putin is expected to run for a fourth term.

“People have some questions and they have not been given any answers. And when people tried to speak out about it, detentions took place,” said Ksenia, another student from Novosibirsk.

Before Sunday’s protests, Russian authorities had blocked access to several internet pages promoting what the government said was “a planned illegal anti-government protest” in or near Moscow’s Red Square.

The organizers of the rally say they are “young people and ordinary students from Moscow” and have nothing to do with Navalny, who is serving out a 15-day jail sentence for his role organizing the March 26 protests.

Among the detainees on Sunday was 17-year-old high-school student Roman Shingarkin, whose father is a former member of parliament who supports President Vladimir Putin, a witness said.

An image of Shingarkin sitting on top of a lamp-post during last week’s rally became a David-and-Goliath style symbol of defiance.