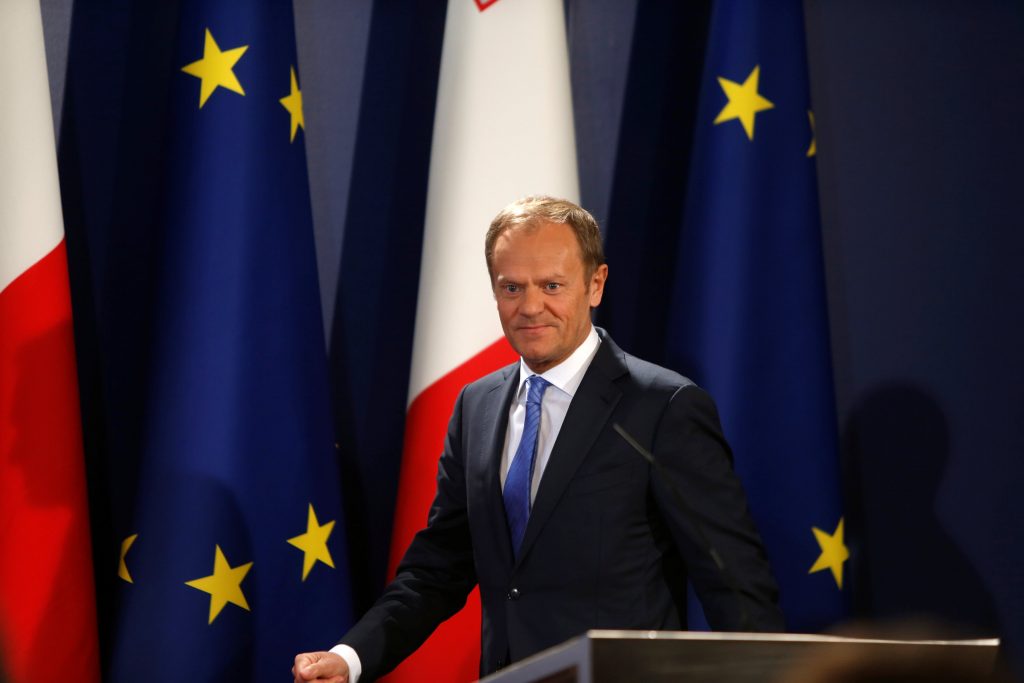 The European Union is ready to talk to Britain on a future free-trade deal before the two sides agree to final terms on Brexit, draft EU negotiating guidelines issued on Friday show.

As part of a “phased approach,” Britain would just have to show “sufficient progress” on its divorce settlement in a first phase of negotiations and EU states could release a lock and agree to launch trade talks in a second phase.

But that concession to PM Theresa May two days after she triggered a two-year countdown to withdrawal was accompanied by elements in the draft circulated by EU summit chair Donald Tusk that the British prime minister may find less palatable.

They include an insistence that during a transition period likely to follow Britain’s departure in 2019 and before a free-trade pact can be finalized, the British must accept EU rules, including budget contributions and judicial oversight, that are some of the main reasons a majority voted for Brexit last June.

If Britain remains a part of the EU single market for a time after Brexit, it would also have to respect all “four freedoms,” which would mean accepting free immigration from the continent.

The draft guidelines, seen by Reuters after European Council President Tusk distributed them to the 27 other governments in the bloc on Friday, may be somewhat revised over the next month before being endorsed by the 27 leaders at a summit on April 29.

Among other elements in the eight-page document, which Tusk will outline at a news conference later on Friday, is a priority to settle legal uncertainty for EU expatriates living on either side of the new EU-U.K. frontier. It says rights acquired before a cutoff on the day Brexit takes effect should be retained.

Responding to PM May’s warning that she might prefer to walk away without a deal, the EU should be ready for such an outcome but will, the document says, work to ensure that does not happen as it would be in the interests of neither side.

The guidelines will form the basis of a mandate for chief EU negotiator Michel Barnier. He expects to launch negotiations in early June, giving him about 16 months to conclude the basics of a withdrawal treaty that can then be ratified by lawmakers on both sides in time for Brexit on March 29, 2019.

“In these negotiations the Union will act as one. It will be constructive throughout and will strive to find an agreement. This is in the best interest of both sides,” the draft says.

“The Union will work hard to achieve that outcome, but it will prepare itself to be able to handle the situation also if the negotiations were to fail.”

Over the past nine months, EU leaders and officials have resisted British calls for immediate negotiations on a deep and comprehensive free trade agreement to replace Britain’s lost access to the EU single market by ensuring low or zero tariffs and harmonising regulations to encourage trade in services.

Many have insisted Britain must first make good on a divorce settlement that will include it settling outstanding financial commitments – the EU has advanced a ballpark figure of €60 billion ($64 billion) – agreeing new border arrangements and clarifying the rights of EU expatriates on either side of the new frontier.

Legally, a trade deal cannot be signed until Britain has left and many on both sides believe that, going by typical times to negotiate such accords, it will take several years beyond 2019 before one is in place. In her trigger letter to EU Council President Tusk, PM May called for trade talks to move ahead “alongside” the divorce.

In his draft guidelines, President Tusk proposed that if the 27 leaders saw “sufficient progress” towards a withdrawal treaty then negotiations on a future trading relationship could start.

Some governments are firmer than others in refusing trade talks from the start, so the guidelines could change. And there could be difficulties for Britain later in securing the agreement of the 27 as a group that progress was sufficient.

The guidelines put no time frame on how long a transition between Brexit and a new relationship should last. Many EU officials believe it could be between two and five years.

But during that time, when PM May hopes to win an election in 2020 where she will want to show she has delivered Brexit, the EU will insist Britain should remain subject to the EU’s “regulatory, budgetary, supervisory and enforcement instruments and structures” – effectively accepting existing EU rules and their enforcement by the European Court of Justice.