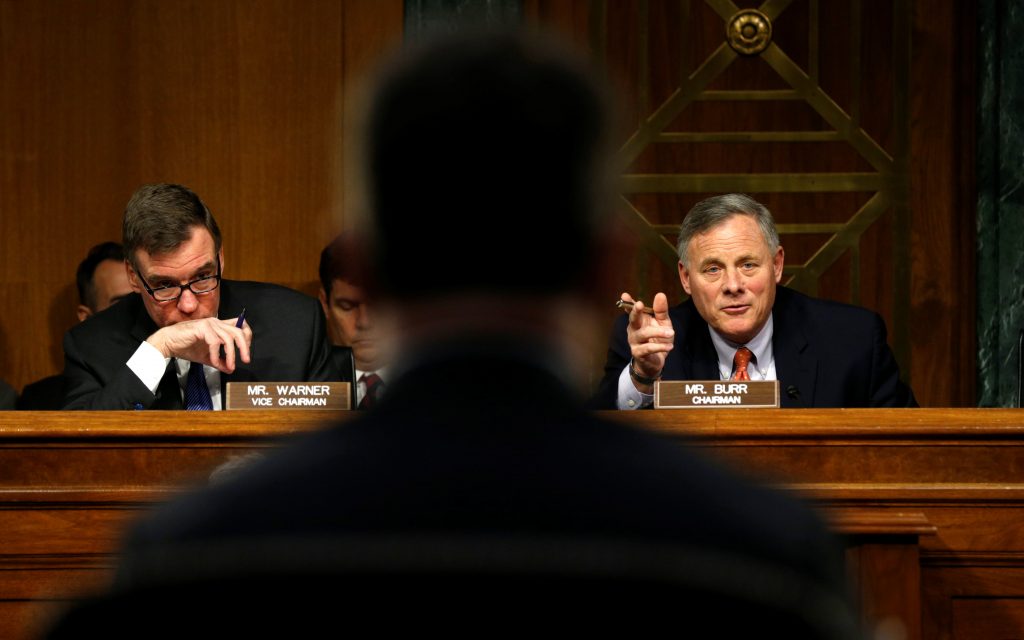 Russia mounted a campaign of “propaganda on steroids” seeking to interfere in the 2016 U.S. presidential election, the top Democrat on the U.S. Senate Intelligence Committee said on Thursday, listing several areas of concern about possible links to Republican Donald Trump’s campaign.

In Moscow, Russian President Vladimir Putin again denied that Russia tried to interfere in the election, but in doing so he made reference to the wrong U.S. president in answering a question at an Arctic forum.

“Once, Reagan, while discussing, I think, taxes, told the Americans: ‘Read my lips: ‘No!’”

His reply recalled what George H.W. Bush told Americans during his 1988 presidential election campaign, “Read my lips: No new taxes.”

“I will not prejudge the outcome of our investigation,” Senator Mark Warner told an intelligence committee hearing on the allegations. “We are seeking to determine if there is an actual fire, but so far there is a great, great deal of smoke.”

President Putin also said on Thursday that contacts Russian diplomats had made in the United States were merely part of routine work.

At the hearing, lawmakers warned of the danger that Russia could interfere in elections in France and Germany this year and in future U.S. campaigns. Cyber security experts at the rare day-long public hearing detailed what they described as the dissemination of disinformation and cyber attacks on both Democratic political operatives and Republicans.

Lawmakers and cyber experts mentioned stories that were being spread to discredit German Chancellor Angela Merkel. And they said Britain’s “Brexit” vote last year on leaving the European Union should be examined.

Clinton Watts, a security consultant and former FBI agent, told Senator Marco Rubio, a Republican committee member, that he may have been a victim of Russian activity during his unsuccessful campaign for the 2016 Republican nomination against Mr. Trump.

Rubio later said he would not comment. But he told the hearing that in July 2016, after he announced he would run for re-election to the Senate, former members of his presidential campaign team were targeted by an unsuccessful cyber attack from Russia.

He said former campaign staffers were also targeted unsuccessfully from within Russia within the past 24 hours.

“We’re all targets of a sophisticated and capable adversary,” said Senator Richard Burr, a Republican who heads the intelligence committee.

Democrat Warner, who was a technology executive before entering politics, described a sweeping Russian campaign using trolls and botnets, or networks of hacked or infected devices, to spread large amounts of disinformation.

The campaign of “fake news” was particularly targeted at traditionally Democratic-leaning states such as Wisconsin, Michigan and Pennsylvania, where Mr. Trump defeated Mrs. Clinton by narrow margins that were not predicted by opinion polls, he said.

“This Russian ‘propaganda on steroids’ was designed to poison the national conversation in America,” Warner said.

Citing concerns to be addressed in the committee’s probe, Warner listed the prediction by a Trump associate about the release of hacked emails weeks before they were released, a change in the Republican Party’s platform to water down language on Ukraine, and Mr. Trump’s campaign manager, Paul Manafort, and other Trump associates being forced to step down over ties to Russia.

A separate investigation in the House of Representatives into the intelligence agencies’ allegations of a Russian role in the U.S. election has become mired in controversy over accusations that its Republican chairman, Trump ally Devin Nunes, is not impartial.

Nunes and Representative Adam Schiff, the top Democrat on the House committee, met on Thursday to discuss their investigation. Schiff said the two had discussed obtaining documents before deciding which witnesses to call in.

The New York Times reported on Thursday that two White House officials played a role in providing Nunes with documents the Republican committee chairman cited to show President Trump and his associates were swept up in surveillance by U.S. intelligence.

The President said Nunes’ comments about the surveillance helped justify his insistence, made without evidence, that former President Barack Obama had wiretapped Trump Tower in New York, his campaign headquarters.