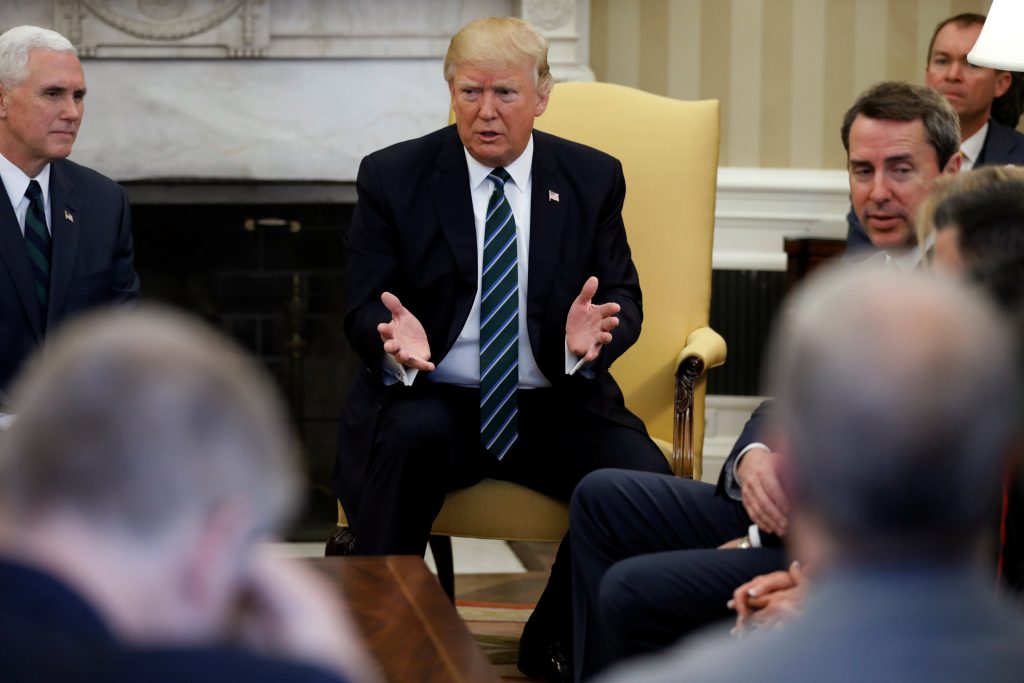 U.S. President Donald Trump lashed out on Thursday at Republican conservatives who helped torpedo healthcare legislation he backed, escalating a feud within his party that jeopardizes the new administration’s legislative agenda.

The President threatened to try to defeat members of the Freedom Caucus – a bloc of conservative Republicans in the House of Representatives – in next year’s congressional elections if they continued to defy him.

“The Freedom Caucus will hurt the entire Republican agenda if they don’t get on the team, & fast. We must fight them, & Dems, in 2018!” Mr. Trump wrote on Twitter on Thursday morning.

“Most people don’t take well to being bullied,” said Representative Justin Amash, who compared Mr. Trump’s approach to what a child does when he wants to “get his way.”

Representative Raul Labrador, one of the founders of the Freedom Caucus, urged Mr. Trump in a tweet to “Remember who your real friends are. We’re trying to help you succeed.”

The President’s deteriorating relationship with Republican House conservatives could make it harder for him to pass his legislative agenda, which includes rewriting the U.S. tax code, revisiting a healthcare overhaul and funding construction of a wall along the U.S.-Mexican border.

President Trump, a New York businessman who touted his skills as a dealmaker in his bid for the White House, has repeatedly criticized Freedom Caucus members, blaming them for the defeat of legislation to repeal and replace former President Barack Obama’s signature healthcare law.

Asked during a briefing whether Mr. Trump’s tweet about the Freedom Caucus was a “divide-and-conquer” strategy, White House spokesman Sean Spicer said: “No, it’s a math strategy, which is to get to 216,” the number of votes currently needed to pass House legislation.

The discord following the healthcare debacle was not limited to tensions between Trump and the Freedom Caucus. In recent days, the president has been out of sync with the two highest ranking Republicans in Congress, House Speaker Paul Ryan and Senate Majority Leader Mitch McConnell.

The President and his aides have suggested reviving the push for a healthcare bill. While Ryan expressed openness to the idea, McConnell said he thought doing so would be futile.

But Ryan publicly disagreed with Mr. Trump when the president offered to work with Democrats on new healthcare legislation.

“I don’t want that to happen,” the speaker told CBS in an interview aired on Thursday.

‘NOT AN IDEAL POSITION’

More than healthcare legislation was at stake.

Republican lawmakers still await key details on what Mr. Trump’s priorities are in the monumental tax reform effort they want to launch.

Passing a budget for next year could also prove challenging. Mr. Trump and the Freedom Caucus want to dramatically shrink domestic programs. Moderate Republicans are aghast at proposals to cut popular programs that fund environmental cleanup and meals for senior citizens.

Most pressing is an April 28 deadline for approving new funding to keep the government running.

“The GOP (Republican) House is riven by factions that are quite ideological. Trump is not,” said University of Virginia political science professor Larry Sabato. “And let’s throw in the fact that Trump is unpopular and weak and has no Democratic support in Congress.

“Add all this up. Neither Trump nor congressional Republicans are in an ideal position to govern, and that’s an understatement,” Sabato said.

There are about three dozen members of the House Freedom Caucus, comprising about 15 percent of the 237 House Republicans. But their clout is larger, as President Trump and Speaker Ryan cannot afford to lose too many House Republicans if they want to try to pass bills, like the Obamacare repeal, that attract zero Democratic support.

Dan Meyer, a legislative affairs chief to former Republican President George W. Bush, said that with the Freedom Caucus threatening Mr. Trump’s agenda, the White House either had to crack the code to working with those conservatives, or tack to the left.

“Moving to the left, and working with Democrats, comes at a price,” he said, noting it could expose more Republicans to attacks from the right.

Some Republicans were so furious they were publicly saying things usually reserved for closed-door meetings.

Representative Chris Collins, a Trump ally and part of the “Tuesday Group” of moderate Republicans, told reporters his group was so angry with the Freedom Caucus that it would “never” meet with them. Collins accused the Freedom Caucus of trying to shift blame for the healthcare failure to moderates.

Senator John McCain, who ran for president in 2008 and was defeated by former President Obama, said that if he were sitting in the White House now, he would try to ease intraparty tensions rather than stoking them.

“But that’s the president,” said McCain who sometimes is at odds with Mr. Trump. He added this advice for him: “Sit down with them and say this is an emergency situation.”

Senator Cory Gardner, a Republican who served in the House from 2011 to 2014, said his former colleagues needed to quit arguing and come to a consensus “sooner rather than later.”

“Ryan … is never going to intentionally alienate a large swath of his caucus,” said the aide, who spoke on the condition of anonymity.

Publicly, Mr. Ryan said he understood Mr. Trump’s frustration. The speaker also said he was encouraging Republican lawmakers “to keep talking to one another.”

Speaker Ryan himself came under criticism from a fellow Republican, Senator Bob Corker, who chided the speaker for his views about courting Democrats on healthcare reform.

“We have come a long way in our country when the speaker of one party urges a president NOT to work with the other party to solve a problem,” Corker wrote on Twitter.