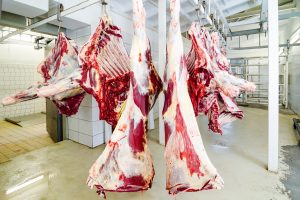 Religious communities in Belgium expressed grave concern over proposed legislation that would make stunning a requirement even for kosher and halal meat production. The bill, which would affect the country’s Flemish region, including Antwerp, is the latest of several attempts to limit religious slaughter methods and is being billed by its sponsor as a “compromise” between animal rights concerns and the needs of faith groups.

Pinchos Kornfeld, president of Antwerp’s Machzikei Hadaas Kehillah and Vice Chairman of the Belgian Jewish Consistoire and Chairman of its Shechita commitee, said that the threat posed to kosher slaughter by the proposal was “very serious,” but was cautious in his initial response.

“We have to study it very carefully and find a way to work with the government going forward on the issue,” he told Hamodia. Noting that the bill is not set to go into effect until 2019, and that it must pass several legislative and procedural hurdles between then and now, he said that the matter was “far from over.”

In an interview with a Belgian media outlet following the bill’s introduction, Mr. Kornfeld was asked what Jews would do if shechitah was indeed banned. His response, “We will eat potatoes,” was widely circulated through the country.

In May 2016, Animal Welfare Minister for the Flemish region, Ben Weyts, introduced a total ban on all slaughter without electronic stunning. A constitutional court reviewed the legislation and said that its restrictions would be a violation of religious freedom, but urged parties to seek a compromise.

A mediator, Dr. Piet Van Temsche, a political advisor and veterinary surgeon, was appointed to work with Jewish and Muslim communities as well as supporters of pre-slaughter stunning to work toward an agreement.

This Wednesday, he presented his report with recommendations for government regulations on kosher and halal slaughter which calls for small animals such as chickens and sheep to be non-lethally stunned before they are killed. Cows would receive “irreversible stunning” shortly after slaughter. According to Jewish law, stunning renders animals unfit for kosher slaughter.

Mr. Weyts hailed the proposal as a “historic agreement,” claiming that some Muslim groups had accepted the arrangement. He released a statement calling un-stunned slaughter “outdated” and called on religious communities to accept the legislation, which will now be subject to several committee hearings, parliamentary votes, and possibly court challenges.

The Belgian Muslim Executive, an official governing body of the Muslim community, criticized the proposal in a statement, saying that there had been no change in their opposition to a requirement of pre-stunning and that their constituency were “worried” about the future of halal in the county.

Belgium is divided into three semi-independent regions. The Flemish district’s capitol Antwerp is home to one of Europe’s largest Orthodox communities. Last month, a high court ruled that a ban on slaughter without pre-stunning in Belgium’s French-speaking Wallonia region was also a violation of the rights of religious groups.

Rabbi Albert Guigi, Brussels’ Chief Rabbi, decried the proposal and told Hamodia that none of the issues he and other representatives of the Jewish community raised in meetings with Dr. Temshe had been incorporated into his final report.

“We are strongly opposed to this bill and will use all legal means at our disposal to defend our rights. We will turn to the Belgian courts and if necessary we will turn to the European Court of Human Rights,” he said. “On the other hand, we are ready to make concessions on condition that they are in compliance with Halachah, such as a training program for all shochtim organized by the Ministry of Animal Welfare.”

Mr. Weyts’ original proposal was largely a result of the government’s efforts to regulate temporary slaughterhouses set up by the country’s large Muslim community as part of one of their yearly celebrations.

As in many European countries, religious slaughter in Belgium has been under attack for decades, a struggle historically led by left-wing politicians and activists on the grounds of animal rights.

Slaughter without pre-stunning is presently illegal in Sweden, Denmark, Norway, Switzerland and Iceland.

The present wave of legislative attempts represent an increasing trend in recent years by nationalist elements in Europe to seek its elimination as a means of curbing the size and influence of Muslim communities on the continent. Many have commented that Jewish communities, and particularly shechitah, have become “collateral damage.” This and previous attempts to restrict religious slaughter in the Flemish region have won wide popularity outside of the Muslim and Jewish communities.

Rabbi Guigi expressed concern of the precedent that such a law would set if finally enacted.

“If today Flanders [the Flemish region] passes this decree, tomorrow it will be Holland, then France and finally it will be the whole of Europe … We cannot jeopardize the future of Jewish communities in Europe, he said.”

This article appeared in print on page 1 of the March 31st, 2017 edition of Hamodia.