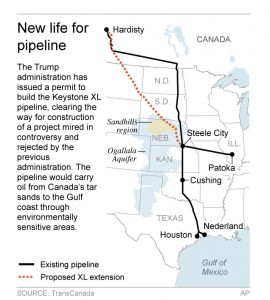 A coalition of environmental groups challenged the federal permit for the Keystone XL oil pipeline in court on Thursday because they say that additional environmental scrutiny is needed.

The Sierra Club, Natural Resources Defense Council and other groups say that the initial environmental review completed in 2014 is inadequate and outdated, and that it underestimated how much the pipeline would encourage tar sands oil production in Canada.

The proposed pipeline that TransCanada wants to build would carry crude oil from Canada through Montana, South Dakota and Nebraska, where it would connect with an existing Keystone pipeline network that would take the oil to Texas Gulf Coast refineries.

The U.S. State Department issued a permit for the project earlier this month, though Nebraska regulators still must review and decide whether to approve the proposed route through their state.

President Donald Trump has said he believes the pipeline will create American jobs and bolster the country’s energy independence. He overturned former President Barack Obama’s rejection of the project in 2015.

Officials with the State Department and TransCanada declined to comment on the lawsuit, saying they don’t comment on pending litigation.

The environmental groups contend in their lawsuit filed in Montana that the 2014 report on the project’s impact “downplays or ignores other significant environmental impacts of Keystone XL, including harms to land, air, water and wildlife.”

The $8 billion pipeline that was first proposed in 2008 has drawn strong opposition from environmental groups and some landowners who worry about potential contamination of ground and surface water.

Supporters of the project maintain that those fears are exaggerated, and the pipeline will have a number of upgraded safety features. The pipeline would carry 830,000 barrels of oil a day.

In Nebraska, the elected state Public Service Commission will review the project. That decision will be based on whether commissioners believe the project serves a public interest, based on evidence presented at a public hearing.